It’s Not the Years, It’s the Miles: Training After 50

Getting older isn’t an excuse to sit on the sidelines.

I have always found solace in the phrase: “It’s not the years, it’s the miles.” Research from Germany in the 1950s taught us that strength, if trained, remains long into the early fifties. But, after that, things happen. Joseph Campbell described aging like the pieces of an old car suddenly falling off: first, the side mirror; now, the bumper.

Aging is inevitable. Every calendar year, your age will increase by a factor of one, and you can look that up if you don’t believe me. But, aging doesn’t have to be given the victory. With a little thinking and some reasonable training, you can keep the side mirror and bumper on for a long time.

Set a positive example for the younger generation.

John Powell, former world record holder in the discus, once gave me some advice for older athletes at breakfast in Orlando, Florida. He noted older athletes need to rediscover two things: “muscle” and passion. He envisioned that we should train in two phases:

For phase two, “Passion” comes from the root, “to suffer.” Whenever we speak about passion, we tend to jump right into the bedroom, but we also have to learn to suffer for what we love. It could be as simple as sore body parts after training or cutting checks for trips to championships.

For phase one, there are movements that are the fountain of youth. I break lifting into six global categories, the fundamental human movements:

Hypertrophy is easy. Just focus on the push, pull, and squat. These are the best movements for piling on muscle.

One caveat: I insist that your total reps in these three moves be all the same. So, if your workout has 50 pushes, you had better have 50 squats and at least 50 pulls. It’s okay for most American males to pull more. Our throwing sports tend to lead to some issues that pulling seems to help.

If the over-fifty athlete can only do one thing, I would recommend three days a week of push, pull, and squat. You will look good, which tends to lead to feeling good, which seems to help you keep moving good (well).

Beyond that basic requirement, older athletes would be well-served to follow these pieces of additional advice.

Maintaining an active lifestyle from youth to fifty and beyond is probably the best thing you can do. There is no surprise here. This year is the 51st year I have lifted weights. I have lifted weights, competed in many sports, climbed mountains, swam in all Seven Seas, walked a few different dogs, and played throughout all my years. It seems to help.

Now, if you or your client has chosen to take a multi-decade break from physical activity, there is an old truth: “The best day to plant a fruit tree was ten years ago. The next is today.” Like the anti-smoking ads promise, within minutes, days, weeks, and months of beginning to move and exercise again, good things begin to happen. Exercise works miracles for the aging population, even for those who are just starting out.

This is where the sixth movement comes in – other human movements. Since I don’t commute, the most dangerous thing I do, statistically, every day is take a shower. In my age group, 28,000 Americans die in falls and fall-related injuries. So, I take getting in and out of the shower seriously. I pause, hold the wall, and make sure I have solid footing. But, wait, there is more!

I also work on the ground a lot: Turkish get ups, bear crawls, a variety of up/downs, and some mild tumbling and gymnastics. I spend time getting up and down off the floor. It is like the “TV Rule” we use for older clients: watch all the TV you want, but you must lie on the floor when you do it. Watching TV in the normal way burns less calories than sleeping. On the floor, you will twist, turn, roll, and self-correct many times during an awful TV comedy. (Although frankly, that is redundant. TV comedy hasn’t been funny in decades.)

Practice falling so you won’t be helpless when it happens to you.

Keep the Spring With Hinges and Carries

So you have begun to rebuild muscle tissue and are practicing surviving things, such as showering. Now it’s time to add the hinges and loaded carries. Terry Todd once mentioned that the loss of fast twitch muscle fibers is the surest sign of old age. I agree.

Keep the “spring” by finding safe movements that can allow you to throw, swing, and leap your way back to youth. If you’re training hypertrophy and you want to slow down and “feel the burn,” fine. But to leap out of the starting blocks or run down a rabbit, you need some fast twitch. The loaded carry family, plus hinges, are the moves that build athletes.

“Beyond work capacity, loaded carries often lead to improvements in performance that make us wonder, ‘What the hell just happened?'”

Hinges are the Olympic lifts, the deadlift, and the kettlebell swing. A hinge is the most powerful thing a human can do. It is the engine of explosion, and I measure it simply with the standing long jump (SLJ). Almost universally, when the SLJ improves, you can be sure that training is on the right track.

In addition, athletes need to do loaded carries. These include farmer walks, sleds, and prowlers. All these movements teach “integrity under load.” Just make sure you maintain body posture while surging and driving ahead with the load. Some argue that these build work capacity, and I won’t disagree. But beyond work capacity, loaded carries often lead to improvements in performance that make us wonder, “What the hell just happened?”

When in doubt: kettlebell swings and farmer’s walks.

You’re all grown up now, so it’s time to eat like an adult. From my book, Mass Made Simple:

“Honestly, seriously, you don’t know what to do about food? Here is an idea: Eat like an adult. Stop eating fast food, stop eating kid’s cereal, knock it off with all the sweets and comfort foods whenever your favorite show is not on when you want it on, ease up on the snacking and – don’t act like you don’t know this – eat vegetables and fruits more. Really, how difficult is this? Stop with the whining. Stop with the excuses. Act like an adult and stop eating like a television commercial. Grow up.”

Stop Stressing About Testosterone (and Everything Else)

I fly a lot and hormone replacement therapy (HRT) is all the rage on airline magazines. HRT probably has its place, but like all drugs, once you start adding things, it is really hard to go back.

Lack of sleep, overstress, overtraining, and lack of proper fat intake all seem to lower testosterone levels. Wouldn’t it be simpler to darken the room, turn off the TV, meditate, soak in a hot tub or sauna, eat an avocado or sip some olive oil, and train intelligently as opposed to buying needles every month?

Personally, I am tired of reading how wonderful X or Y’s training program is and then later discovering, “Oops, I forgot to mention my injections.” Adding coconut oil to coffee or getting eight plus hours of sleep a night seems a better route. Instead of stressing about low testosterone levels, raise them by de-stressing.

Employ a team. I have an eye doctor, a dentist, and a medical doctor who all know me on a first name basis. I make the appointments and show up. I have several nutritionists who I can call, a great “bones” guy, and a fine masseuse. I have friends and family who can coach me into being better at my sports.

Build the team. Reward them when you can. Embrace them. 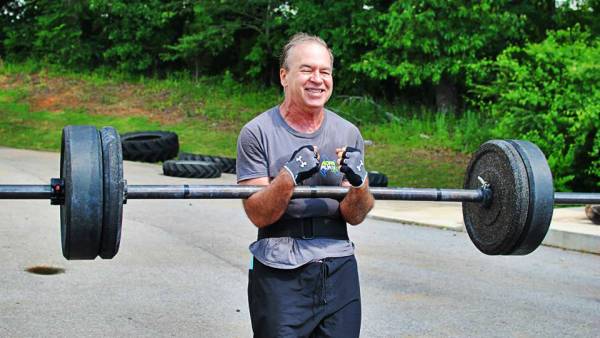 Zercher carries will challenge you mentally and physically.

I learned something from John Price when I first entered Masters competition. He told me, “Open your checkbook.” If you decide to get into a sport, buy the equipment, hire a coach, and travel to destinations.

I have thirty kettlebells, two Olympic bars, four suspension trainers, racks, ropes, rings, and everything else you can imagine to train at home. I fly away and compete, train, and take workshops. I might not have many years ahead of me, but I have cash.

Recently, I summarized the advantages of Masters training with two words: “cash and clarity.” Now you have the money and the focus to compete and play wherever and whenever you like. Do it. Just do it.

The upside of maturation is money. Spend it.

Have someone find your gaps. Wives are amazing at this.

“If you’re training yourself, you’ll tend to know everything you decide to do. You’ll always push yourself exactly as hard as you feel like pushing yourself. You won’t have any gaps in your training because you have no idea what you’re lacking. Finally, you’ll be able to progress and regress easily in your system since your single follower – you – will know what you want, even if it isn’t something you need to do. I hope I painted a picture of mediocrity here.”

Keep quality people around to point out your flaws in programming, execution, and exercise precision.

Find a community to help you push past mediocrity.

Time goes on, as do we. Since age eleven, I have accepted the fact that I am going to die. Robb Wolf once told me: “Live long, die fast.” I can’t disagree.

I have my wills, living wills, and DNRs already written, signed, and co-signed. Death will come knocking one day, but I hope I have left early to compete, laugh, and dance at a Highland Games.

I expect Death to share a toast or two before we do a Challenge Sprint into the next life.