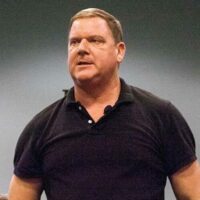 Dan John has been teaching and coaching for well over thirty years. He is the former Strength Coach and Head Track and Field Coach at Juan Diego Catholic High School in Draper, Utah. He remains a full-time online religious studies instructor for Columbia College of Missouri and contributing writer to Men’s Health. Originally from South San Francisco, Dan came to Utah to throw the discus for Utah State University and recently returned “home” after 35 years away. He currently lives in Burlingame, California.

Dan has Masters degrees in history and in religious education, as well as intensive work at the American University in Cairo, University of Haifa, and Cornell. Dan has written articles for Catechetical Update and Utah Historical Quarterly, as well as being a columnist for the Intermountain Catholic. Dan was also a Fulbright Scholar in 1985.

In addition, Dan writes articles for a variety of strength magazines and publishes a little newsletter called Get Up, which registers up to a quarter of a million hits a month. You can also read his work at magazines like Men’s Health and Outside and his busy forum at Dave Draper. If you sneak over the border into Utah and want to work out, give him a shout.

At home, he is humbled by his lovely wife, Tiffini, whose middle name is not “long suffering” no matter how often it is repeated, and his two daughters, Kelly and Lindsay.

In his athletic career, among many other championships and records, Dan has won the Master Pleasanton Highland Games twice, American Masters Discus Championships several times, the National Masters Weightlifting Championship once and holds the American Record in the Weight Pentathlon.