Whether you grow to reach your potential depends entirely on the effort you are willing to invest.

Stop me if you’ve heard this one. An oil tycoon, computer genius, a soviet weightlifter, the founder of Ford Motor Company, and one of the greatest basketball coaches of all time walk into a bar… and influence the actions of billions of people around the world.

This may sound like a bad joke, but John Rockefeller, Bill Gates, Vasily Alekseyev, Henry Ford, and John Wooden are all remembered for their remarkable contributions to our society. Their inventions and accomplishments are immeasurable in value, and evidence of their influence can be seen in everything from highly specialized technical objects to items we use during our daily routines. If success is what binds this diverse group of individuals, then effort and teamwork define them.

Training for the Legion is often described as physically challenging and psychologically stressful. Each legionnaire becomes your brother in arms whatever his nationality, his race, or his religion might be. You show him the same solidarity that links members of the same family. Respect for traditions, devotion to your leaders, discipline, and comradeship are your strengths; courage and loyalty your virtues. In combat, you act without passion and without hate, you respect defeated enemies, and you never abandon your dead or wounded. Your missions are sacred, and they are carried out until the end, even in the face of certain death. There is no greater showing of effort than that of a legionnaire.

Application of the legionnaire’s discipline and virtues into our own lives begins the moment we decide to focus solely on that which we can control. Our mindset can have profound effect on learning, skill acquisition, personal relationships, and professional success, but we must work to continually develop accurate self-perception. Dr. Carol Dweck, in her book Mindset: The New Psychology of Success, says that most people will fall into either a fixed or growth mindset:

People who have adopted this type of mindset believe their traits are permanent and there is no way to change them. For example, some of my athletes believe they will never be able to power clean because they just “aren’t good at them.” Instead of attacking the reasons behind their lack of success, they shy away from challenges. They harbor a fear that poor performance might confirm they can’t learn, if they believe they lack the intelligence, or else indicate that they are less athletic than they think, if they believe they are an All-American. When these types of athletes fail, they make excuses and try to rationalize their failures.

On the other hand, “In a growth mindset, people believe that their most basic abilities can be developed through dedication and hard work—brains and talent are just the starting point. This view creates a love of learning and a resilience that is essential for great accomplishment,” writes Dweck. Individuals with growth mindsets believe they can become smarter and better if they work hard and persevere. This mindset allows them to learn more, learn it more quickly, and view challenges and failures as opportunities to improve their learning and skills.

Advances in neuroscience indicate that the brain is far more malleable than we ever knew. Brain plasticity research has shown how connectivity between neurons can change with experience. With practice, neural networks grow new connections, strengthen existing ones, and build insulation that speeds transmission of impulses.1 In the past, most of us believed that “you can’t teach an old dog new tricks,” and the only the young could be taught new behaviors. These neuroscientific discoveries have shown us that adults can increase neural growth, but the amount of growth will be a direct result on the amount of effort we put into our brain’s development.

The sign inside my high school locker room reads, “Give 100%, 100% of the time. Ask no more, accept no less.” That statement is both a motivational call to a standard, and a limitation. To expect anything more than everything from yourself or someone else is the surest way to set up for failure.

If we possess a fixed mindset, success will be measured exclusively by results. But in a growth mindset, we take advantage of practice opportunities and measure progress on the way to the result. What matters most is that we make the effort to be the best version of ourselves. Our tendency is to hope that things turn out the way we want, sometimes without doing the things that are necessary to make them turn into a reality. But if we consistently give 100% of ourselves to the work that is required, the results will come. This does not guarantee the results will be exactly what we want, but only you will know if you truly gave 100% of yourself.

During my collegiate football career, effort and honesty about effort were central to the philosophy of my coaches. Our coaching staff utilized the techniques of the French Foreign Legion to draw our attention to the details of our assignments, and focus our efforts on improving after every rep and every play. Axioms such as “play the next play,” and “the scoreboard is always a lie,” were intentional distractions from the end result. They forced us to concentrate on the task at hand. Discipline, attention to detail, and no less than 100% effort were rewarded with a highly-coveted helmet sticker. But unlike most universities, these stickers were not handed out often. These stickers, which held the emblem of the legionnaires, were an honor and privilege to receive and apply to our helmets.

During the end-of-season banquet, each person who earned a helmet sticker was given a hat adorned with the emblem of the legionnaires as a sign of our success. I still wear the hats I earned, and continue to implement the same growth mindset strategies that my parents and coaches taught me as I was growing up. The symbol of the French Foreign Legion is a powerful reminder that we pave the road to great accomplishments when we view challenges and failures as opportunities to improve our learning and skills, instead of viewing them as roadblocks.

Are You Giving Your All for Your Team?

John Wooden believed that the winning score of the game or success of a project should be a byproduct of the efforts of each individual on the team. More often than not, there is a star player or leader that receives all of the praise for the team’s success. But regardless of popular acclaim, each member plays a vital role in keeping the team together and running as it should. Wooden likened his team to a car. He was the driver of the car and provided the team with direction, the standouts on the team were like the engine, and the other teammates were like the oil, nuts, and bolts that helped hold the engine together and allow it to run smoothly. Not one section of the car could run effectively alone, and they all needed each other to arrive at their destination. 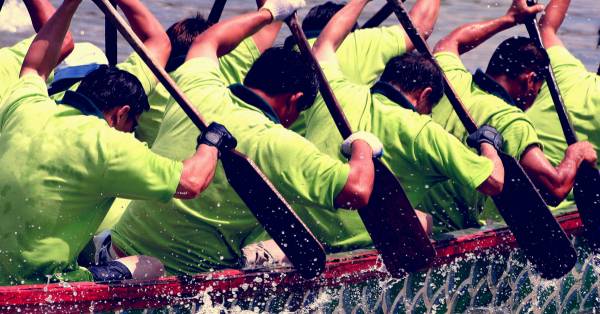 Think of the teams you are currently on. Are you being honest with yourself and truly giving 100% effort? Are you accepting less than 100% effort from your teammates? We need to be legionnaires for our jobs and teams. If we are able to give our best effort day in and day out, then no matter the outcome, success will be ours.

When you focus on your best effort, comparisons don’t matter:

Why Better Than Average Isn’t Good Enough for Me