Foam Roller vs. PNF Purgatory: Which One Will Save You?

Is all that time on the foam roller actually working? A recent study compared foam rolling to PNF stretching.

In almost every gym I visit, I see people hanging out in “foam roller purgatory.” This term is not meant to disparage foam rollers, as I have spent many hours doing my penance. However, could we spend our time doing something else that would be more efficient? A recent paper set out to test this question.

Daniel Junker and Thomas Stöggl from the University of Salzburg in Austria set out to test the effectiveness of foam rolling versus contract-relax proprioceptive neuromuscular facilitation (PNF) stretching. PNF stretching was developed by Henry Kabat. The idea behind it is that it fools the body’s stretch reflex, which usually protects the muscle from stretching too far. By flexing a muscle and then letting it relax, you can get deeper into the stretch.

The idea behind PNF stretching is that it fools the body in order to allow you a deeper stretch.

Another example is to load a bar with a heavier weight than you could deadlift and perform an isometric hold to activate the hamstring muscles. Then immediately release and go into a toe touch. You should be able to reach further than if you did a toe touch without the contraction (technically, this is a subtype of PNF, called post-isometric relaxation or PIR).

The researchers gathered forty recreationally active male athletes and randomly assigned them to one of three groups:

The participants were tested before and after the twelve-session intervention. The testing consisted of the stand-and-reach test, frequently thought to measure hamstring flexibility (there is some controversy on the validity of the test as spinal flexion also plays a role).

The intervention consisted of three sessions a week for four weeks (the control group had no intervention, rather they only did the testing). Foam rolling was focused on the hamstrings and participants spent around ninety seconds on each leg. The PNF group sat in the stretching position until it was uncomfortable, and they then contracted the hamstring by pulling on a rope for six seconds. After contraction, they relaxed further into the stretch (for ten seconds). They repeated this pattern three times.

In the study, the participants used the foam roller on the hamstring muscles.

The researchers found that both the foam rolling and PNF groups showed improvement in flexibility, but the control group did not. The PNF group and the foam rolling groups did not seem to differ in how much they improved. 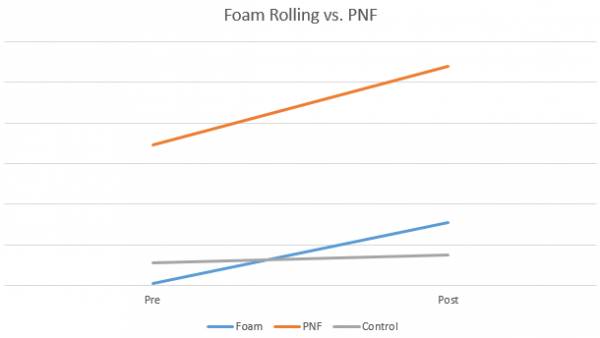 Last week, I critiqued an article and one of my criticisms was the small sample size. This article also suffers from the same problem and it can be seen in the graph. The authors did not include the graph, that is my creation, and they might not have included it as it shows a problem that occurs when working with a small sample size.

“The take-home from this article is that both methods work. I just wish we learned which works better so we could be more effective with our time.”

The problem is group equivalency. The groups do not begin the study out at the same ability (as sample sizes get bigger, this issue usually disappears). It is a problem because groups that do not start out equally may have differential treatment effects. Specifically, the PNF group already has greater flexibility on the reach test. A more flexible (or less flexible) group might benefit from one intervention over another. Maybe people who have been stretching for a while could use foam rolling to release knotted muscles and stretch a greater distance. This bias affects our confidence in the results.

In future research, the authors might also choose to compare other methods for flexibility, other intervention time intervals (multiple sessions versus one long), and different muscle groups (different techniques might be better suited for different muscles). 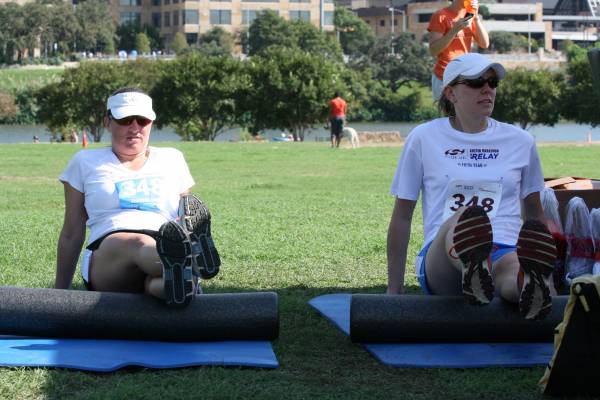 The results of the study suggest we may have to stay a bit longer in foam roller purgatory.

The take-home from this article is that both methods work. I just wish we learned which works better so we could be more effective with our time. Flaws in this research and inconclusive results do not point to one method being superior, but that does not mean they are equal.

Foam rolling has purposes other than facilitating flexibility. It is a recovery tool that provides a means for self-massage. Thus, this article only looked at one purpose of foam rolling. There might be better techniques to build flexibility, but you might give up some other features of foam rolling. For now, we may have to stay a bit longer in foam roller purgatory.