Stop abusing your IT band. It is your friend, and you haven’t been treating it like one.

Foam rollers seem to be all the rage these days and often for good reason. They’ve been demonstrated to restore lost range of motion at certain joints and many of us swear by their ability to help massage away soreness and speed recovery.

Foam rollers seem to be all the rage these days and often for good reason. They’ve been demonstrated to restore lost range of motion at certain joints and many of us swear by their ability to help massage away soreness and speed recovery.

Chances are high that if you’ve ever used a roller, you’ve used it to roll out your iliotibial band (IT band), and likely at the recommendation of a trainer or one of your runner friends. It’s okay. We’ve all been there.

But now do me a favor. Stop abusing your IT band. It is your friend, and you haven’t been treating it like one.

Initially, the logic behind rolling your IT band seems fairly sound. Foam rollers increase range of motion and reduce pain. My IT bands are tight and my knees hurt. Therefore I should apply the roller to my IT bands to solve these problems, right? Unfortunately, more often than not the answer to this question is a resounding “no.” It’s quite possible you’re actually doing more harm than help and further stretching an already abused and over-elongated piece of tissue.

In order to understand why rolling your IT band isn’t always a good idea, you first need to understand the anatomy of your hips and thighs and the issues that most commonly lead to IT band pain in the first place.

On the sides of our hips we have a couple of muscles responsible for the motion known as hip abduction, the movement of your leg away from the centerline of your body. Basically, if you’re standing up and you lift your leg out to the side without rotating your foot or leaning your upper body in the opposite direction (which would be cheating) you’ve just abducted your hip. Congratulation, that’s step one in understanding the problem.

Step two is understanding what hip abduction is mainly responsible for. It is meant to allow for dynamic stabilization of your knee during movement, particularly walking and running. Our knees have a tendency to shift medially, or laterally, during movement and our bodies use hip abduction as a way to mitigate this issue.

Step three is understanding the muscles that produce this motion. Your IT band is attached to a smallish muscle called your tensor fascia latae (TFL), which is meant to stabilize your knee and assist in abduction, but the prime mover is actually your gluteus medius, one of the muscles in your buttocks (found, perhaps unsurprisingly on the upper part of the lateral aspect of your glutes). I would say that in 90% of the cases that present with IT band issues it is the gluteus medius (or glute med if you want to speak in sophisticated PT lingo) that is actually the culprit behind the pain.

When the Glute Med Goes on Vacation

The issue is often that the glute med either isn’t firing correctly or just straight up isn’t firing at all. The human body is an incredible machine and will adapt to just about any demand placed on it. When one of your primary movers is too weak to perform the movement on it’s own, some of the stabilizers and assistive muscles will kick in to help. While this isn’t such a big deal if it happens once or twice as a result of absolute fatigue of the prime mover, when your body becomes neurologically programmed to always initiate movement with the smaller assistive muscles, then you’re setting yourself up for an injury. 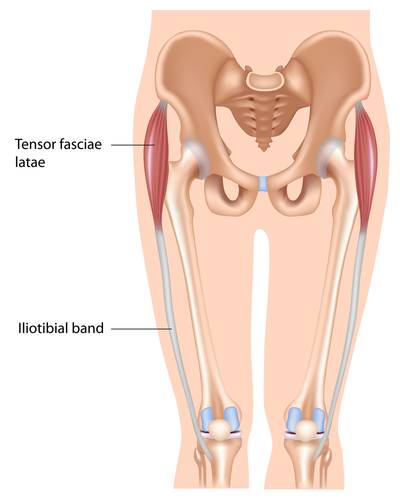 What typically happens is something like the following scenario. Our glute med isn’t firing correctly for any number of reasons. Generally speaking, the glute med is one of the weakest muscles I test on a regular basis, even in monster athletes. When the glute med is weak, it can’t do much to stabilize your knee so the TFL kicks in. Now your TFL isn’t quite as big or powerful as the glute med so it can’t dynamically stabilize your knee nearly as well. It is, however, attached to this big thick piece of tissue (your IT band) that it can tighten up to help stabilize the knee statically. The problem with this is that you’re now statically using a structure to achieve dynamic stabilization. That’s kind of like responding to the shocks on your car being too loose by tightening them up so much that they can’t move.

As a result of this compensation an enormous and unnatural stress is placed on the IT band, which leads to tightness, inflammation, pain, and (frequently) foam rolling. The problem then is that we are attempting to treat an over-stretched, inflamed tissue by further stretching and beating the heck out of it. While it may feel nice for a little while after your leg goes numb, you aren’t really doing anything to affect any kind of permanent change and in some cases you may be pushing the issue further.

How to Test for Glute Med Weakness

The truth is that glut med weakness is an incredibly common issue. If you have IT band pain and want to test for glute med weakness in yourself you’ll probably need a friend to help. Lay down on your side in a straight line and make sure your hips are stacked on top of one another. Now with your legs out straight bring your top leg, whichever it may be, back a bit so that your toe is touching the heel of your bottom foot. Now flex your ankle and try to raise your leg.

Now have your friend attempt to push your leg down gently at first and then with slightly increasing force. If you can maintain the height of your leg without your body position shifting, then congratulations, your hip abduction is actually quite strong. For most of us, we will either resort to cheating or simply be unable to maintain the leg raise.

The nice thing about this issue is that it can be fixed rather easily. The same leg lift you used as a test can be used as an initial exercise to reteach your glute med to fire. You simply need to pay close attention to avoid cheating and make sure you feel the muscle pulling from the upper region of the lateral aspect of your buttock (where the glute med is located). If you start to feel the pull on the front of your hip, then take a break and adjust your position because you’re cheating.

As with most movement disorders the true solution is mindfulness of your body position and mindfulness of your movements. Weak hip abduction is an insidious because it can cause all sorts of issues. Luckily, it’s rather easy to identify and deal with. Get your glutes firing again and maintain mindfulness of their proper use while working out. Yeah, it really is that simple. Now get out there and get moving.

Photo 2 by Centers for Disease Control and Prevention [Public domain], via Wikimedia Commons.