Many years ago, I was training Brazilian jiu jitsu with my instructor on a crowded mat. Another pair rolled into us, and my instructor stopped our training and asked them to move. Repeatedly. But they continued to train – right on top of us – Tasmanian devil-style.

I was on my back with my instructor in closed guard. One person in the other pair went to sweep his partner, and the other attempted to defend the sweep by back-stepping his heel hard. His heel landed right between my eyes. Everyone on the mat heard the crunch, although I am probably the only one who saw the stars.

A frenzied few minutes ensued, during which the assembled masses ensured that I was, in fact, still alive. There was a frantic search for an ice pack. Those attending to me only heard my muffled, barely intelligible utterings as I writhed on the ground, cradling my face.

Over the coming days, an egg-sized lump rose on my forehead like a nascent horn. I ended up with a pair of shiners and a screaming headache. I’m sure I was concussed, though I foolishly refused to go to the doctor.

A crowded training mat can be a dangerous place. All the more so if the people on it have poor mat awareness.

The Consequences of Lost Awareness

In the immediate aftermath, the person who crashed his foot into my third eye kept repeating to our instructor, “I didn’t hear you.” His partner echoed a similar refrain to anyone who would listen: “I didn’t know you were that close.” They were both contrite and scared that I was seriously injured. I was, but I recovered.

The most notable part of this story is not my injury, but the fact that the other two grapplers were completely unaware of their surroundings. At the time, I could not fathom how that could be true, particularly since my instructor had yelled repeated warnings. They were dangerously encroaching on our training session.

As relative novices in jiu jitsu with probably fewer than three years of experience combined, they lacked mat awareness. Mat awareness is a recognition of one’s physical proximity to other people or things while training. In jiu jitsu, mat awareness can protect you from the danger they pose.

Courtesy Promotes Safety on the Mat

Developing mat awareness is how we grapplers can keep each other safe. By building up our spidey senses, we’ll be better able to adjust when we infringe on someone else’s space. In many jiu jitsu academies, etiquette dictates that if two pairs of grapplers get too close, the higher-ranking pair stays put and the lower-ranking pair moves. For example, two purple belts would have to move out of the way of a black belt training with a blue belt.

There is also a convention that a pair of grapplers who are in a stable position, say with one person in the other’s closed guard, should move out of the way of a pair that is involved in a scramble and has not yet established position. The idea is that the closed-guard pair can more easily re-establish position than the scramblers. One challenge, though, is when two sets of scramblers or two sets of closed-guard people are closing in on each other, and then it becomes unclear as to who should move.

Then there are a few who refuse to move even though they see the potential for danger because their egos are dictating their behavior. Sometimes you will be one of these people – I know I have been. But since I have received a first-hand education on the potential for danger, I follow the logic of “foot beats face.” If your white-belt extremity is dangerously close to my purple-belt moneymaker, you can bet I will not stand on ceremony. I will move. After the fact, I will do my best to educate all involved about our mutual responsibilities. I am in no rush to repeat my double-shiner experience anytime soon. 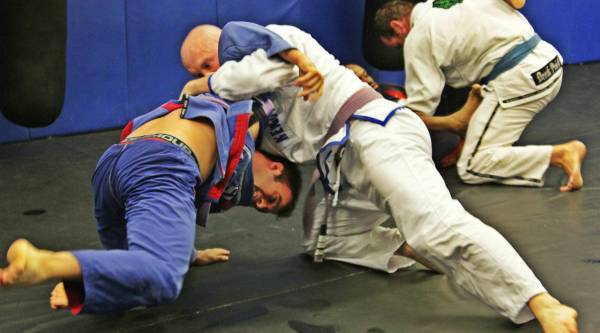 There are a few rules of thumb regarding who should move and who should stay put, but immediate safety trumps them all.

Unfortunately, there may be a direct correlation between mat awareness and jiu jitsu experience. The very people who have the highest need to recognize the potential for a collision are the ones least cognitively equipped to do so.

This solidifies the importance of competition experience for the well-rounded grappler. Competitors in the heat of battle must learn which stimuli to ignore (crowds cheering, announcements), and which to attend to (their coach’s voice, the referee, their own state of arousal, the opponent). Competition experience teaches a grappler how to identify what needs attention and how to focus on multiple things at once.

Mat awareness is an important part of any grappler’s skillset, but the challenge is how to propagate it in our academies and other training spaces. Should it be explicitly taught? Are lower belts more capable of recognizing potential danger than I am giving them credit for? In any case, for the safety of everyone on the mat, it needs to be part of the conversation at any BJJ academy.

What are your thoughts about mat awareness? Do you think it is important? Do you have a method of teaching it at your academy? Post your observations and opinions to comments.

More Lessons From the Mat: