3 Training Mistakes That Leave Fighters Too Smoked for Skill Work

These are the most common mistakes I see in fighters’ strength training plans, and my suggestions for fixing them.

The role of strength training in sport, and in particular combat sports, is one of the more hotly contested discussions in the fitness world. One side rightly argues that in most cases skill triumphs and therefore it is of the utmost importance. The other side believes a bigger deadlift will solve all the world’s problems, from poverty to winning gold medals and championships.

There are not many matches with truly evenly skilled opponents. At both the high and low levels of competition this may be true, but for everyone else the reality is that skills win matches and fights.

Skill is what wins matches, so make sure your strength training leaves room for skill work.

That’s not to say strength training for a martial artists is a waste of time, because it isn’t. But because most martial artists and fighters don’t really have either an in-season or an off-season, their training can tend towards being easily misdirected. It’s easy to push too hard in the gym when it isn’t vital and leave yourself too smoked for skill work. At the same time, in can be hard to kick it up a notch when it is time to get serious before your competition or fight.

Mistake #1: Too Much Conditioning

The first mistake I see martial artists and fighters make is too much time spent on conditioning. Yes, you need to be fit. No, you don’t need to be in perfect competition shape all year round. In fact, trying to do so is holding you back from gaining in skill and overall strength.

“Anaerobic endurance is the most fickle of all fitness qualities. It can be built seemingly in weeks – usually three to four for most people – but will evaporate almost overnight if left alone for even a short period.”

When it’s not competition time, you will gain enough fitness from regular training alone. Trying to add in extra conditioning work of the variety needed for match fitness is a quick path to burnout or injury. While you do need some anaerobic endurance work, you probably need less than you think.

Anaerobic endurance is the most fickle of all fitness qualities. It can be built seemingly in weeks – usually three to four for most people – but will evaporate almost overnight if left alone for even a short period. But if you keep one workout a week devoted to it you will maintain the feel for it, so when you return to devoting large amounts of time to it again pre-fight you won’t suffer unduly.

The second big mistake I see fighters routinely make is wasting time on the wrong exercises. The goal of strength training is to get strong, not to add size. Adding size is the goal of hypertrophy training and there is a specific way to go about that. Most martial artists will be better off working on strength and minimizing mass gain so that their power-to-weight ratio improves.

“[W]hen it comes to adding raw brute strength, there are some exercises that are better than others. The deadlift is probably king of these.” 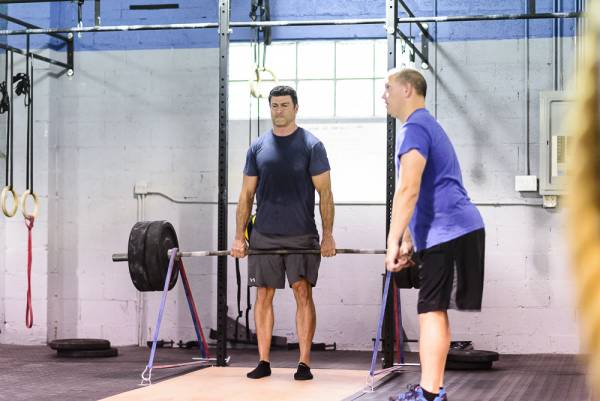 The deadlift is one of the best exercises to build raw brute strength.

One final area that often gets neglected is the midsection. Fighters need abs that will handle support strength to fight off takedowns. That means they should include exercises that allow the use of heavy loads or have the feel of having a high load, such as the dragon flag.

“I believe boredom is one of the main reasons people don’t do more ab work.”

Fighters also need muscular endurance to help slip punches and continually twist to punch or initiate throws. This means incorporating age old movements like sit ups and med ball throws. A great way to combine these and prevent boredom is use of the circuit format. I believe boredom is one of the main reasons people don’t do more ab work.

Making the Most of Training Sessions

The serious BJJ competitors I’ve worked with all train five or more times per week on the mat. MMA fighters will likely do more as they have more skill sets to work on. That leaves precious little time and energy to push hard in the gym. The biggest key I can give you in terms of your assistance work is to look for the best return from the least expense of energy and time.

“Dan John believes you have about ten good reps in you for each big exercise. Use them wisely.”

In other words, instead of doing two or three exercises for chest, like you would in a bodybuilding split type routine, do one. If you have found pushing strength to be an issue, use the bench press or weighted dips. The same goes for legs – pick one big exercise each time you go in the gym, such as front squats or the deadlift, and do a few sets using as much load as you can handle.

In terms of reps, the magic number is likely quite low. The closer you get to competition, the lower this will become. Ian King has said the number of reps needed to gain strength is somewhere between one and 100 – but it’s a lot closer to one than you think, he adds. Charlie Francis used to drop the number of reps in Ben Johnson’s strength work to about 60% as events drew closer. The lower reps still allowed the body to work hard and get the message to activate lots of muscle. At the same time, the reduced reps minimized fatigue and soreness, leaving Ben fresh to perform at his best. Dan John believes you have about ten good reps in you for each big exercise. Use them wisely.

Conditioning in this building phase should be minimized. Runs can be done at a relaxed pace to build the aerobic base, using nasal breathing as a guide. Beyond that I would advise no more than ten minutes of hard anaerobic, but I would do this using equipment like rowing machines, the Airdyne, or ski erg because they have been shown to have a better effect on fitness than a metcon using load. Remember, our goal is best effect for minimal time. Lift for strength, not for fitness. 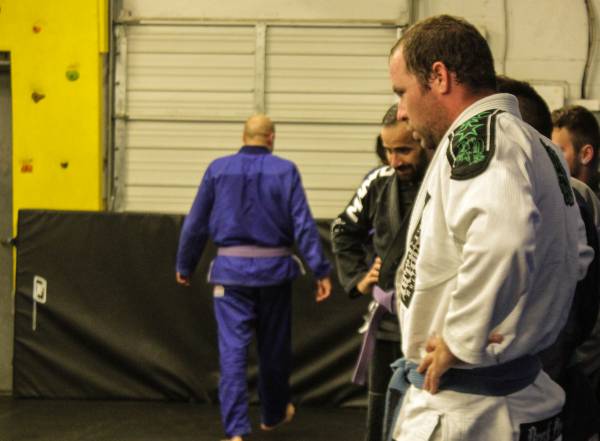 Save the all out anaerobic work for closer to your next event.

This means our program should consist of one or two big exercises done for around ten reps, along with some assistance abdominal work, and then a short amount of anaerobic training. The workouts will be short and sharp, leaving you fresh and wanting more. Save that for the few weeks before your fight so you can really turn it up close to your event. Here’s how it might look:

Don’t be scared by this minimal plan. Recovery is the key to gaining strength, not trying to fit as much as possible into your week. If you feel the need to add extra conditioning at this point of the year, stick to aerobic-only easy runs. Leave yourself fresh to work on your skills and you’ll have a bigger payoff at fight time as you’ll have more weapons to use.

Photos 1 and 3 courtesy of Breaking Muscle.