What if there’s a little magic in those mushrooms after all? The mushrooms cordyceps and reishi have been a part of Traditional Chinese Medicine and Japanese medicine for hundreds of years. But according to modern research, Western science backs up their use, as well.

Both mushrooms are considered adaptogens. According to PubMed, adaptogens are:

[C]ompounds that increase the ability of an organism to adapt to environmental factors and to avoid damage from such factors. The beneficial effects of multi-dose administration of adaptogens are mainly associated with the hypothalamic-pituitary-adrenal (HPA) axis, a part of the stress-system that is believed to play a primary role in the reactions of the body to repeated stress and adaptation.

In practical terms, this means these mushroom extracts should help you adapt to stress, sleep better, balance hormone levels, and maintain a healthy energy level by up-regulating or down-regulating your systems as needed. In addition, both reishi and cordyceps are thought to be beneficial for people suffering from diabetes, cancer, and high cholesterol.

So, if you’re supposed to take things like reishi and cordyceps on a regular basis to get these benefits, how do you do that easily? Four Sigma Foods came up with a solution – instant mushroom drinks.

These drinks come in what look like tea packets, but instead of being filled with leaves, they are full of a dual-extracted mushroom powder. Dual extraction, using both water and alcohol, is considered the best method for making the contents of mushrooms bioavailable to those consuming the extract.

While Four Sigma has a whole line-up of mushroom-based products, they invited me to try their Instant Cordyceps and Instant Reishi.

Cordyceps is said to increase both energy levels and sexual performance. It is believed this is due in part to a compound called cordycepin. Cordycepin is an analogue of adenosine, as in that stuff in adenosine diphosphate, which transforms into adenosine triphosphate, or ATP. ATP is, of course, the stuff that makes our muscles work and gives us energy.

According to Four Sigma, research has also indicated that cordyceps consumption may be able to increase your VO2 max. As such, it is indicated for people suffering from breathing problems like asthma or for athletes looking to increase breathing capacity.

The mannitol is also partially credited for the sexual performance aspect of cordyceps. It supposedly increases blood flow. And I’ll let you figure out the rest from there. I would also warn, though, that mannitol is a sugar alcohol and, therefore, also potentially increases other less desirable bodily functions.

Reishi is typically taken to reduce stress and improve sleep. Each packet of reishi powder contains 1,000mg of red reishi extract, which consists of 30% polysaccharide and 2% triterpene as the active ingredients.

Triterpene, or triterpenoids, are thought to help with treatment of diabetes, inflammation, and even cancer. In lab mice, triterpenoid treatment was shown to inhibit tumor growth.

The polysaccharides present in reishi are also believed to have anti-cancer effects. But more than that, the polysaccharides are believed to help protect cells from free radicals and have an overall positive benefit on the liver and its functions. This was shown in a 2009 study where diabetic rats were treated with reishi.

The Taste of Reishi and Cordyceps

The reishi, on the other hand, tasted good at first, but if I didn’t drink it all immediately it developed an increasingly bitter taste as it cooled down, which I found unpleasant. My husband tried both drinks multiple times with me, though, and he enjoyed the flavors with no complaints. So it may just be I’m more sensitive to bitter flavors (which is entirely possible, as I’m an aging supertaster).

Both the drinks dissolve easily in hot water. They are fine powders and barely require even any stirring once the water is added. Four Sigma suggests you can also blend the powders into smoothies, shakes, or other foods. They even include recipes on their website.

Both powders are also sugar free, caffeine free, gluten free, soy free, non-GMO, and all natural. Both are also vegan and no actual caterpillars or larvae are used in the making of the cordyceps. (That might be a relief for non-vegans, too.)

What Four Sigma Has to Offer

In addition to reishi and cordyceps, Four Sigma has other instant mushroom drinks available , including chaga, shiitake, maitake, and lion’s mane. Four Sigma is located in Finland and as such is amenable to shipping all over the world and accepting of a wide range of currencies through their online store. 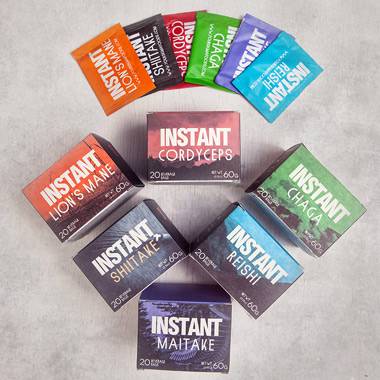 In the end, if you are a believer in the healing and medicinal powers of mushrooms, then I think these instant powders are a great way to regularly consume the active ingredients. And while it may seem like an expensive tea, it’s far less expensive than buying these actual mushrooms on a daily basis. Not to mention more convenient.

If you are someone who is dubious about the powers of mushrooms, but are willing to give it a try, then these drinks could also be for you, due again to both the convenience and the price point. Personally, I plan to drink up the rest of what I’ve got left of my boxes.