Most people don’t think of mushrooms as anything other than a textural addition to meals or a gourmet flavoring, but the truth is rather different. Thanks to the research collection skills of Dr. Joel Fuhrman and others, mushrooms are now recognized as nutritional beasts and may even be part of the formula for chronic disease prevention and longer life.

Here are five reasons why these fungi should be part of your regular diet:

Mushrooms contain unique lectins called antigen-binding lectins that when consumed seek out and stick to cancerous and abnormal cells. By binding to the undesirable cells, these lectins effectively label the cells for destruction by the immune system. Additionally, they prevent the bad cells from replicating.2 Basically, these compounds are like the advance scouts of anti-cancer Special Forces – they identify and laser-target the enemy within our bodies.

Viruses and abnormal cells are terrified of mushroom phytochemicals. Mushrooms also have compounds within them that enhance natural killer T cell function (NKTs), which detect infected or damaged cells and destroy them.3

Mushrooms contain high amounts of angiogenesis inhibitors. Angiogenesis, or the growth of new blood vessel networks, is required for both tumors and fatty deposits to continue to grow, and the compounds within mushrooms prevent these new blood vessels from being formed, thereby helping to stop both cancer proliferation and fat accumulation.4 Mushrooms simply leave cancer (and fat cells) with nowhere to grow.

They’re also powerful warriors against heart disease. According to recent studies, mushrooms seemingly prevent atherosclerotic plaque from sticking to our arteries, thereby helping to prevent our arteries from getting clogged.5 If the plaque-forming compounds have nowhere to stick, they just move along their way and are escorted out of the body. 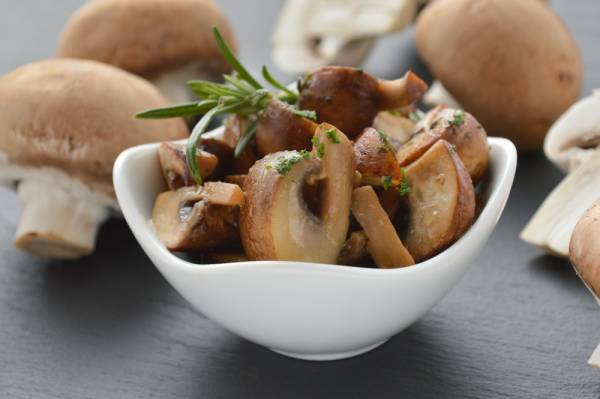 A tiny variety of mushroom might be a secret weapon for athletes. Cordyceps sinesis, a tiny fungus known in Chinese medicine for years but only recently becoming more popular in the West, has been show to significantly increase oxygen carrying capacity and fight adrenal fatigue, while also containing all of the cancer-killing functions of other mushrooms.6,7,8

Besides the cordyceps, which can be found in capsule form in any health food store, what kind of mushrooms should we be consuming to reap the benefits of all this disease-fighting and fat-destroying power? It turns out that when all mushrooms were tested for antioxidant levels, the lowly white button mushroom came out on top. Also ranking highly were porcini, cremini, and Portobello varieties.9

If you’re as convinced as much as I was by all these studies, then it’s time to start thinking of mushrooms as an essential part of your diet. Grill or bake some Portobello burgers (which also happen to be loaded with protein), add mushrooms to soup, chili, or a salad, or just simply sauté them with some onions as a side. And consider picking up some cordyceps capsules and see if it positively affects your performance in the gym.