From Pool to Ocean: A Personal Account of My Brief Open Water Swim Career

A lifelong swimmer, I had always competed in the pool until I was enticed to try open water swimming. Read on to hear my tale of the literal ups and downs of learning to swim the open water!

For as long as I can remember I have been swimming. I was never afraid of water. I braved the pool and the ocean at leisure. At a young age it appeared I had some sort of talent in swimming and so my parents did what most would and started me on swim team. From that point the pool became my second home, a place to work, something I took seriously. I trained and competed, but rarely relaxed at the pool. Relaxing in the water to me meant the ocean.

But in 2011 my feelings about the ocean would change. My friend Gracie van der Byl threw a challenge at me: to join her and her team of La Jolla Cove swimmers in crossing the Maui channel from Lanai to Maui. Bear in mind at this point I was training full time to swim the 50m Freestyle in the London Olympics. I remember my first reaction was “Are you insane? There are sharks there!” Then it moved into, “How far is the Maui channel, really?” Then to, “No way, I am a sprinter, my races last but thirty seconds!” And then finally, “Where do I sign up?” I was tricked! I was now hooked on this new challenge and as with everything that crosses my path in life, I was determined to succeed.

I immediately made two adjustments to my training. The first was adding two longer swim sessions, with pace work. This helped me in learning a comfortable pace I could hold over a longer swims. The second was to add facial stretching weekly to help me swim with a longer stroke that I could sustain for a longer period of time. I also switched to a high fat and low carbohydrate diet. Fat is a much more efficient fuel source, especially when you are exerting for longer periods of time. The last adjustment was to try and maintain an alkali system with the introduction of high pH water (between pH 8.0 and 9.5).

Before facing the ocean I decided to enter a couple of local competitions to swim the 1000yd Free and 1500m Free. I learned what it felt like to race for a much longer time than I was used to, with the help of flip turns and the safety of the pool. I tested my pace. I learned where it started to hurt and made stroke adjustments to cope with the length of the swim. 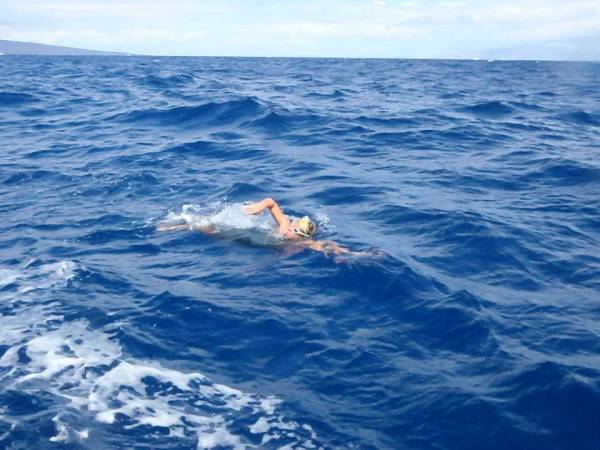 It was time to try the ocean, in non-race conditions first. Flanked by two world-class open water swimmers, Gracie van der Byl and Anne Cleveland (never swim alone, especially in an area you don’t know), we took on a two-mile ocean swim, with a gelid 61-degree water temperature at the Cove, without a wetsuit, and in the company of sea lions. My first impression was, “Hey there are no lines at the bottom, how do I know where I am going?” Easily fixed with bilateral breathing and learning to focus on a landmark on shore. Dealing with unpredictable water conditions, however, was a different story.

Maui came quickly, and I felt like I had barely “learned to swim” when it was time to race. It was a star-studded field with athletes like Olympic gold medalist Peter Vanderkay and Australian Open Water phenom Trent Grimsey. As part of a relay team, I was not expected to start, so luckily I was one of the middle swimmers, where the pack had spread and I didn’t have to fight for a line to swim. I did, however have to deal with being on a rocking boat for quite some time, and with a rocking boat comes motion sickness. I was inside the boat changing into the suit I was going to race in when the motion sickness finally hit me. With violent spasms, there was no time for modesty, and I was forced to run to the side of the boat, exposed to all, to eject the remnants of breakfast. Lesson learned, Dramamine, or any other anti-emetic could prove useful if I ever do this again. 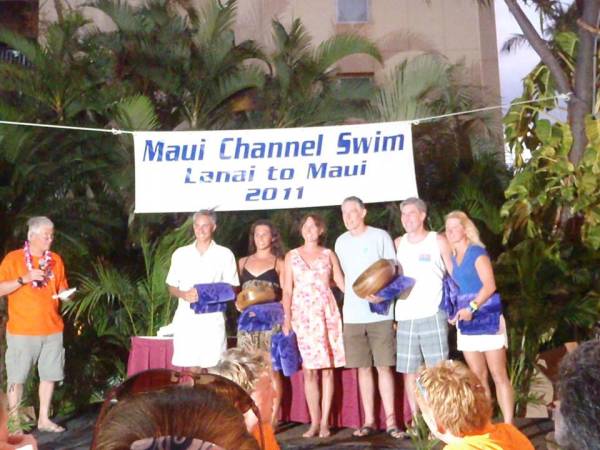 While preparing for the swim a few technical issues were important to ensure I was the most comfortable possible during my time in the water. Sunscreen to protect my skin, Vaseline or any other similar ointment to prevent chaffing from the suit, a comfortable swim cap, and I found that polarized goggles gave me the best views. Taking over from Diane Gleason, I got in the water to swim my leg of the relay. I remember rocking up and down; I felt waves constantly crashing on me. At some point I remember thinking I was on the set of The Perfect Storm. There were times I felt my arms didn’t even make it out of the water. But for some reason I wasn’t hurting, and I was actually enjoying it, despite the salt burning my throat and continuing to feel motion sickness from all the rocking. My team ended up finishing eighth overall, and first in the Mixed division, earning us the coveted Maui Channel crossing towels, and our name on the celebratory bowl.

I thought that would have been the end of my open water “career,” until unexpectedly, while in Brazil, friends entered me in an open water two-mile race, ten minutes before it was set to start. No boats on this one, so vomiting wasn’t an issue, and it was the crossing of a bay, so much calmer waters. It was time to deal with other common issues with open water swimming. Without guide boats I now had to find my own line, and in addition to that I had to fight everyone over my line.

In open water swimming anything goes! Elbows, fists, knees, kicks, whatever it takes to grab the best line to swim – there is no mercy. People will literally grab your legs and pull you if they need to (try adding some Vaseline to your legs and enjoy your competitors slipping when they try to grab you). Ultimately, it can get brutal, especially around buoys. The important things to note are that to make your swim the most efficient, find the best 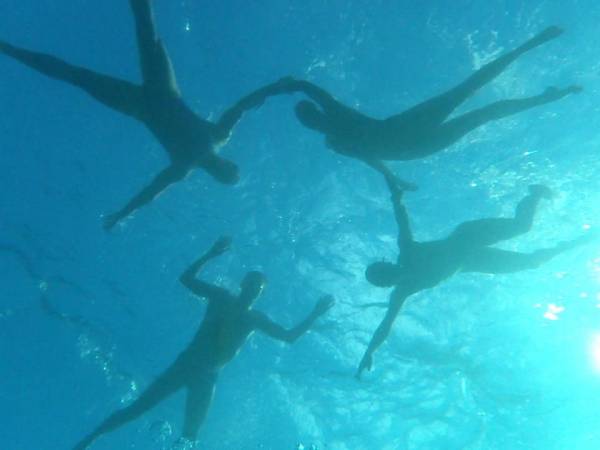 line and breathe bilaterally with a reference point on shore, so you don’t deviate from that line. It is common courtesy not to draft from other swimmers, but not all races enforce that rule. I will admit, I drafted off other swimmers – anything goes, no mercy right?

My open water career was fun, but short. Although I coach people to swim in open water I have no intentions to race in open water anytime in the near future. My strength is in the pool (and the gym!), and that is where I will stay.