Front and Center: The Best Exercise You Are Not Doing

If your goal is to move well, improve your core and posture, and get strong, this may be the best exercise you are not doing at the moment.

I don’t know what it is about the barbell front squat, but it’s treated a little like the poor cousin of the barbell back squat. Many people think that front squatting with a barbell is only for those looking to Olympic lift, where it plays a huge part. But that always makes me think, if that is the case, and Olympic lifters are the strongest athletes on the planet, then why the heck wouldn’t you want to do front squats?

I would argue that the front squat provides:

Let’s face it, it is a hell of a lot easier for the average gym goer to do the usual leg press, leg curl, leg extension, smith machine squat—and my favorite, the half-assed, half-rep back squat for their Facebook or Insta account—than it is to get under a heavy front squat.

The front squat allows the lifter to go much deeper (so there goes your half rep back squat bragging rights), but this, in turn, allows better glute activation due to the depth, The front squat requires considerable postural and core strength to stay more upright. There is also that pesky rack position which most people simply do not understand, and as a result, they think they have a wrist or mobility restriction. Most of the time people just don’t have the technique right. And because the bar usually sits up against the throat a little, it can be uncomfortable. So, unfortunately, front squats often get thrown in the “too hard” basket.

So what variations of the front squat are there? What is a great way to progress to one? And if you don’t want to do a front squat with a barbell in the rack position and wanted the same benefits, what could you do instead?

Well, I am glad you asked.

As human beings, we learned how to squat from a very young age—and usually from the bottom up as part of our developmental patterns. Children often spend lots of time in this position and as a species, we spent a lot of time shooting the breeze hanging around fires and making things here, too.

Many grown adults have lost the ability to do something that they could do as children. We stopped moving, started sitting on chairs and toilets, and lost a fundamental movement pattern. The reality is many of us, due to our sedentary lifestyle, have lost the ability to squat well, so the first step to me in learning any loaded squat is to regain a relaxed flat foot squat that we could do as a child.

In many countries, people still go to the toilet and spend long periods of time resting in this position. It is often called the third world country squat for this reason. I remember on a trip to Vietnam a few years ago, an elderly lady was waiting for a train alongside us for an hour or so.

If we cannot rest comfortably and breathe easily in this position, for at least a few minutes, then we probably haven’t yet earned the right to squat with load under a bar yet. If you can get to this step and can relax, then congrats, you’ve reclaimed the movement you had a kid. Isn’t that cool?

Work on Your Thoracic and Ankle Mobility 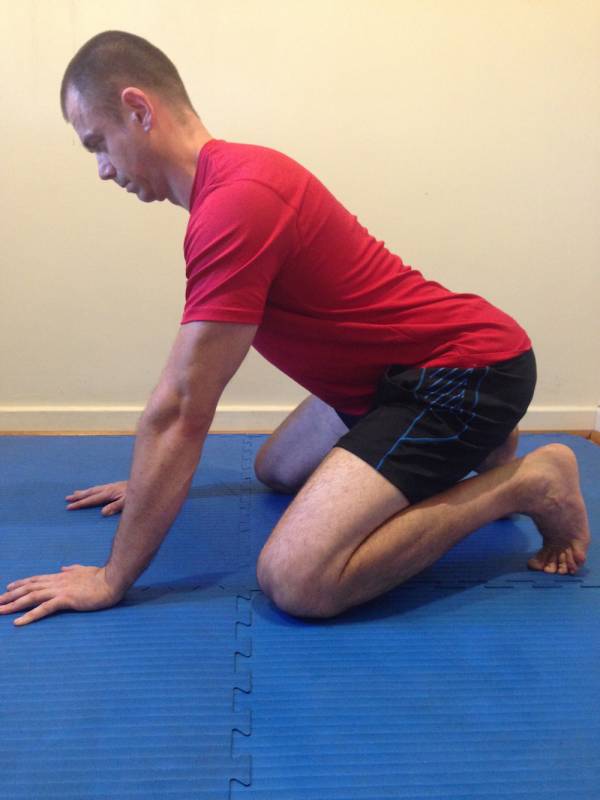 Two areas that should be mobile, but often are not, are your thoracic spine and your ankles. When it comes to the front squat or squatting in general, in my humble opinion most people struggle more with ankle mobility (and more specifically with dorsiflexion) than they do with hip mobility. The ankles and feet get no love, and we take what they do for granted.

With modern footwear often taking the need for our feet and ankles to functional optimally out of the picture by doing all the work for us, and doing all sorts of nasty things to our feet and toes, it is often a surprise for many to learn how bad their feet and ankles are when it comes to mobility, especially as they get older.

Combine this with one of most common injuries being inversion sprains of the ankle, then the ankle joint often has very little of the 3.5-4 inches of ankle dorsiflexion that it should. If you are struggling with an ankle ROM challenge, then all you have to do is Google or YouTube ankle dorsiflexion or ankle mobility to find a vast amount of material on this. 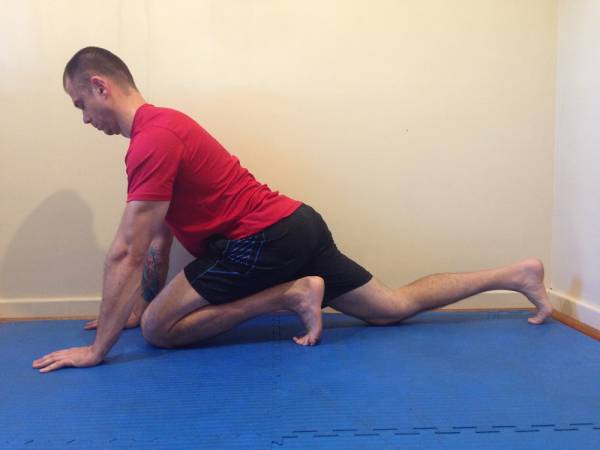 Another prerequisite for the front squat is that the torso needs to stay very upright on the lift. This great for lower back health compared to the back squat which often is more a lower back exercise, and often why it is prescribed to athletes that require a thick back like rugby league and union players.

As a result of this upright positioning, many struggle with the thoracic mobility required to do so. Tight lats play a huge role in making the front rack position harder than it needs to be with keeping the upper arm parallel to the ground and the elbows high, so look for any thoracic extension, lat mobility, and thoracic mobility material that will help you stay upright. 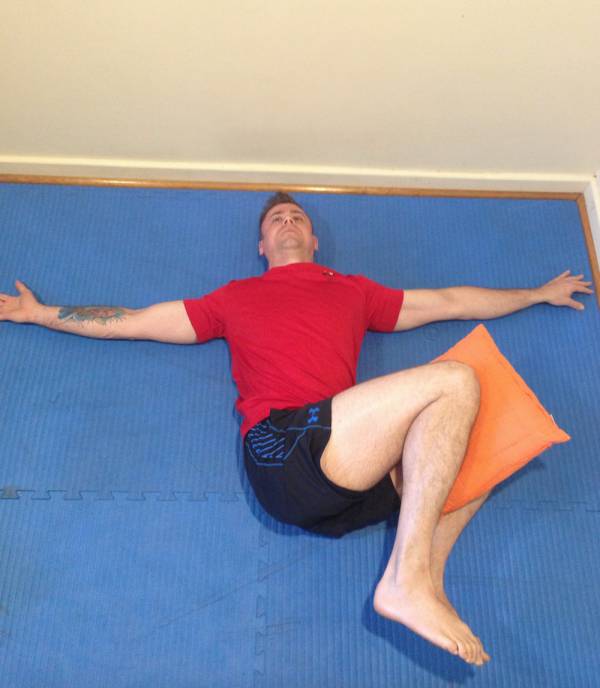 Learn How to Goblet Squat

Popularized by Master RKC Dan John, proficiency with the goblet squat should be obtained before progressing on to pretty much any other squat progression; it is that good. Whether it is holding onto a medball, dumbbell, kettlebell, or whatever you have lying around, learning how to goblet squat well, like they are taught on an HKC or RKC certification, should be your next go to.

The goblet squat will start to teach the body to remain upright while holding a weight in front of the body up around the chest connected to the sternum and midsection so it starts to mimic the same movement pattern and requirements of a good barbell front squat. Sometimes chocking the heels up on some weight plates will help the pattern by giving added ankle dorsiflexion or a band around the knees to engage the glutes and hips properly may also help make your goblet squat awesome.

The next step in working to your barbell front squat or taking your kettlebell practice to the next level is with the kettlebell front or rack squat, held in one hand (which can sometimes be supported by the other hand).

Yes, this is an asymmetrically loaded squat that really starts to test keeping the elbow up and thoracic spine upright in the squat as you rest the kettlebell in the “v” between your chest, forearm, and bicep—and is a more challenging version than the goblet squat from a positioning perspective. Add another kettlebell to the picture and you have the double kettlebell front squat—a staple of double kettlebell lifting and probably the best way of getting someone strong with two bells.

With the kettlebells in the rack position connected to the body (and up high), it really emphasizes the quads and tends to force you to lean back to counteract the weight, keeping you more upright. I would argue that in many ways this is much harder and often feels heavier than its barbell cousin with the same weight. Don’t take my word for it. Grab two 32kg or two 36kg kettlebells and squat them for reps. It is the master of kettlebell grinds and an essential exercise to master for any double kettlebell work. 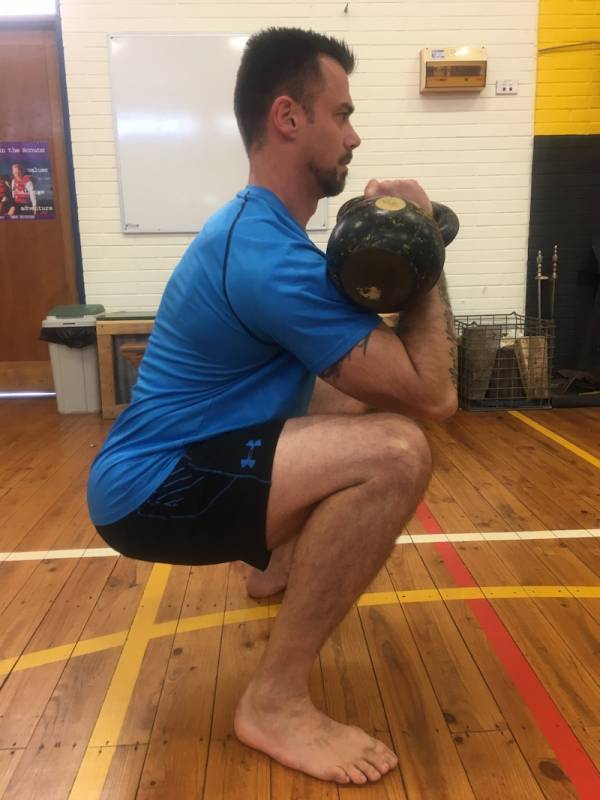 When I first saw the Frankenstein squat, the name didn’t resonate so much to me. It looked more like a zombie from The Walking Dead or Night of the Living Dead with the arms outstretched. This variation of the front squat utilizes the bar only, resting on the upper chest/shoulders and up against the throat as the regular front squat will, so it’s an awesome variation for building confidence and getting used the bar up against the throat.

It helps to continue to develop the understanding for the position of both arms in relation to the floor and if the chest pitches forward and/or the elbows drop too low, descending into the squat, the barbell will roll off the arms and drop to the ground. So it is a great place to start with the barbell.

Finally, to the front squat. By now with the previous progressions, you already have plenty of squatting practice. You have the prerequisite mobility and stability and have a great squat pattern going. You are acutely aware of how important the positioning of the upper arms and the torso are, particularly at the bottom of the squat as to not drop the bar. You’ve also done some zombie squats so you are also comfortable with the bar on your throat.

The last piece of the puzzle is the rack position. This position is always the bain for most beginner lifters who often feel that their elbows and wrists are going to snap under the load. The reason is simple—they often don’t understand the position. While some people may genuinely have some limitations and restrictions doing this lift, if you have 90 degrees of extension in the wrist, just like in a push-up, then you are good to go.

Some of the key points with the rack position are:

As a bonus, I had to mention the Zercher squat in this article as a barbell alternative, simply because it is my favorite squat with a barbell, and it usually has me feeling like I can walk through walls afterward. This variation is done with a barbell in the crook of the elbows, palms facing you like a bicep curl. Initially, it can be uncomfortable with the bar in the elbows, but this is easily remedied with a pair of fat grips, a towel, or some foam.

The Zercher squat can be an amazing alternative for those with shoulder issues or genuine wrist restrictions. The added bonus is that with the bar further out in front of you, the more core and posture control you need to maintain in order for you not to fall flat on your face. It teaches you to compress the abdomen and sit between your legs.

Because the bar placement is closer to the floor and further from the body, more recruitment of the hip and lower back musculature is required than that of two kettlebells. So, the Zercher, in fact, can often be a substitute for both the barbell back and front squat.

As the saying often goes, “if it was easy everyone would be doing it,” but sometimes it’s only “not easy” for us because we simply don’t understand how to do things. And as a result, we underestimate the value.

Don’t fear the front squat in its various forms. If your goal is to move well, improve your core and posture, and get strong, this may be the best exercise you are not doing at the moment. There is a front squat for almost everybody.