Game Day: A Mental Approach to Competition, with Kenny Kane

Last week we talked with CrossFit LA team coach Kenny Kane about the mental approach to training versus the mental approach to competition. All too frequently beginner or amateur athletes blur the line between training and competition, both mentally and physically. The tools and perspectives for training that Kenny gave us apply to sports far beyond CrossFit and could be put into practice by athletes of all levels and disciplines training for their events.

This week the focus of our talk with Kenny is competition and how the mental state differs from all that came before game day. Game day is about taking all the weeks of practice, experimenting, failing, and succeeding and, in a way, letting go of it all and just doing it completely. Kenny explained:

The biggest difference between the two is having that sense of urgency, without the panic of urgency. At game day it’s about going, “Okay, now we’ve done all these different preparations now it counts, we’re going for it.” You’re going to take that same attitude we’ve been practicing this whole time, which is “drop into the moment.” We’re going to have fun with this. We’re going to play for this, but you’re going to go after it and go at it with 100% intensity. That’s the biggest difference, is being able to have that switch that you literally flick on.

The ability to turn on and off the focus and the “moment” of competition is part of what separates professional and successful athletes from the rest of us. For athletes of all levels, however, the mine can still be a mindfield of obstacles to navigate. The thing Kenny has seen most often get in the way of great athletes is the element of fear – specifically, the fear of past failures repeating themselves.

Great athletes, great performers are those who can fail horribly but not have it affect their performance on game day. Love or hate Brett Favre he’s one of my favorite competitors of all time because in any given game he can literally throw four interceptions, yet he would forget that completely come back on the next set of downs, drive his team down, score a touchdown, drive them down again, score another touchdown, come down with forty five seconds left and win the game. How does that happen? Well, you’ve got to have amnesia. You’ve got to have self-confidence and amnesia.

The difference between the great athletes and what makes people really good and not so good is the willingness to let go of all the fear and the failure they had in whatever practices, put that behind them, and now trust that those new skill sets are there and they’re going to be able to allow those skill sets to come through – not cognitively but instinctively. That’s the distinction; you’re replacing the emotional component of fear with trust. 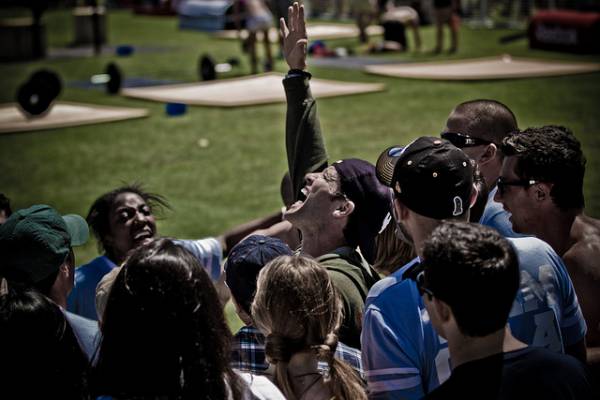 Kenny finds inspiration for this mind-set in the writings of Mihaly Csikszentmihalyi and in Taoist philosophy. In Taoism there is a concept called “wu wei.” Wu wei can be seen as effortlessness in your actions, that you are simply doing something without thinking or interfering in your own movement. Kenny explains how wu wei applies to competition:

That only comes after massive work and repetition to prepare yourself for those moments when you can be effortless. You drop into it through the hard work of preparation and the ego requisite to drive you to do that, but the humility to surrender yourself to the moment. The ego is the driving force, the fuel to get you into that position, but if your ego takes over during those game day moments, I do not feel you’ll be as competitive as you can be. I think if you can put yourself in that position and surrender yourself to humility once you’re in competition, then you can find another whole level you didn’t know existed, because now you’re totally absorbed. It’s not your ego. It’s not your past saying I won five bouts. None of that matters at all. That’s in the past.

And, as we all know, sometimes game day results in a win and sometimes in a loss. Part of the mental landscape for a competitive athlete is dealing with the aftermath of the event. Sometimes it may be you worked so hard and feel so good on a personal level that a loss might feel like success. Other times, however, a loss just feels like a loss.

As a coach, how does Kenny handle an athlete who is dealing with disappointment?

You took it on the chin and you’re going to take it on the chin for another week or two as people critique you and you critique yourself, but at some point you come back to the preparation and the accountability for the preparation, and then the recognition of whatever admission of what went wrong in preparing yourself so that very thing doesn’t happen again. Those things take a while to get over, but they are also great fuel.

For Kenny, taking big chances and using disappointments as fuel has allowed him to achieve success both as a competitor and as a coach. For Kenny, the biggest rewards come with the biggest risks:

Read part one of our two part series with coach Kenny Kane – Fun & Flow: A Mental Approach to Training, with Kenny Kane