Pause repetitions are a tried-and-true method of adding muscle and strength and should be a mainstay in any true strength-training program. In this article I’m going to address the generally accepted use for pause reps, the underlying physiology that makes them work and a simple aspect of pausing that, though incredibly important, is often overlooked.

One of the aspects of human performance that has always fascinated me is the variability of strength. There are a number of different athletes that could all correctly be called “strong” despite possessing wildly different physical attributes and performing very different tasks. Both a lifelong martial artist and a competitive powerlifter will posses a real and measurable level of strength despite having completely different functional capacities.

A close friend of mine has a habit of saying, “Strong is strong.” The comment usually follows him shaking his head at one of my academic deconstructions of some athletic feat or movement. When I see something that doesn’t make sense to me, I want to analyze it piece by piece. Him? As long as he’s putting more weight on the bar and he’s not in pain, then he couldn’t care less about his available degrees of thoracic extension or the best mobilization technique for his anterior hip capsule. To him, strength is simple: the ability to overcome challenges.

In truth, there are a number of different approaches to moving the bar and many different systems at play. On a physiological level, strength is generally comprised of three things:

This is the degree to which your body is capable of controlling your muscles and is a rather complex topic in and of itself. Nervous innervation refers specifically to the ability of your nervous system to recruit and fire as many motor units as possible as quickly as possible. It could also, however, refer to things like motor patterning or muscle memory, your body’s ability to utilize the right muscles to produce the proper movements suited to the task.

It’s one thing to have properly innervated quadriceps that will fire hard and fast when called upon. It’s quite another to have your entire body under such fine motor control that each complimentary muscle group will fire precisely the amount required to provide the next link in the kinetic chain. Proper nervous innervation of a single muscle is the mastery of an instrument. Proper motor patterning turns your musculoskeletal system into a symphony orchestra with the kind of chemistry that can only be earned from years of playing together.

There are a number of different types of elastic tissue in our muscles that have a range of capacities for storing and releasing energy. First and foremost, we’ve got our ligaments, the tissue that connects bones to other bones. Ligaments were never meant to be utilized actively, as they’re not terribly stretchy and have a hard time returning to their original length when stretched too far. Unfortunately, that doesn’t stop many of us from doing so (intentionally or otherwise) and often leads to a whole bunch of injuries.

In addition to ligaments, there’s the parallel elastic component, which is all of the elastic stuff surrounding the actual muscle fibers and the series elastic component, which is more or less a fancy term for your tendons. Each of these tissues can function something like a rubber band. They are capable of storing energy as they are stretched, which can then be released and utilized to perform mechanical work when the tissues are allowed to shorten. Unlike a rubber band, however, the elastic components of our body will only store the elastic energy for a short period of time and it will dissipate if not quickly utilized.

The third and probably most obvious physiological factor in strength is the sheer number and size of your muscle cells, colloquially referred to as swoleness. The bigger your muscles are, the more force they can produce. Not terribly complicated.

While it’s not technically a central factor in force generation, it’s worth mentioning that mobility (or more specifically, lack thereof) can significantly inhibit force production. Conversely, if you’re incredibly strong and incredibly immobile, it’s also possible that your muscles will straight up tear themselves or something else important off of your body. Mobility matters. 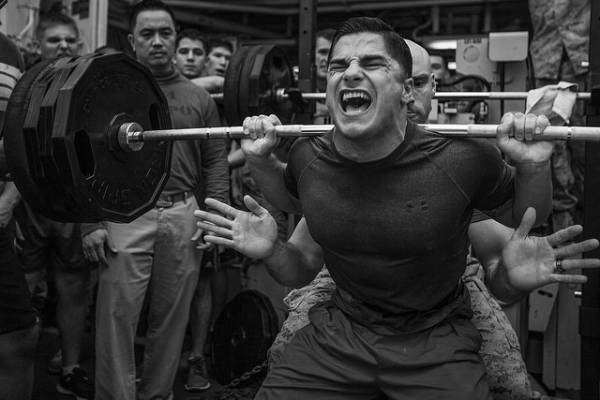 Being explosive is in vogue right now. That’s not to say that it isn’t valuable or legitimate. It absolutely is. The unfortunate aspect of this type of training, however, is that often the simple foundational factor of strength is forgotten. Everyone focuses on form and power, how to move quickly and open the hips explosively. That’s all great, but your form isn’t going to make up for the fact that you’re weak.

The Case for Pause Reps

Pause reps are the opposite of ballistic or plyometric training. Rather than seeking to take advantage of increased nervous innervation or an increased function of the elastic components of our muscles, pause reps force you to face your challenge with strength and strength alone.

Pausing at the bottom of the repetition allows the elastic energy to dissipate while simultaneously breaking your momentum. There is no stored energy to take advantage of, no kinetic energy to roll with. When you pause, all you’ve got is your muscles to produce the force you need. No tricks, no cheats, just pure strength.

Some people go hard with pausing, stopping for a full two or three seconds between reps. There is certainly some validity to this approach, particularly if you’re training to compete in a powerlifting federation with notoriously long pauses (cough IPF cough). That being said, you only need a small pause to get the advantages pausing provides. Just long enough that you know your momentum is broken.

If you pause long enough that getting the weight to move again is probably going to suck, then you’re doing it right. I advocate pausing on all repetitions unless you are specifically training speed or power. If you’re going for strength, pause.

Humans, particularly academics like myself, have an unfortunate habit of overthinking things. We complicate our approaches to simple goals. Pausing is the essence of simplicity. On top of the obvious benefits it offers, there’s one more that I particularly like: pausing forces you to lower your weight to a load you can handle.

It’s easy enough to slap on a belt and some shoes and bounce through a set of heavy squats. When you have to mindfully lower yourself and pause at the bottom without releasing any of your tension and then initiate the concentric phase entirely with sheer muscular strength, then there’s not a lot of room for interpretation. You can lift the weight or you can’t. Your technique tricks won’t help you.

I’m an enormous advocate of simplicity in my approach to all things. This is why I love pause reps. Simple, straightforward, and honest. If you want to get strong, take a second and learn to pause.