Get Stronger Today With Lessons From Old-Time Strongmen

There is a lot more to learn from great athletes of many years ago. If you take just a few ideas from them regarding strength and training, you too should be able to become as strong.

In order to get better today sometimes its necessary to look backwards at what history can teach us. I’m a huge fan of the old-time strongmen. This term usually refers to professional weightlifters and exhibitionists around the period of 1880 to the 1930s.

These strongmen were around long before the advent of steroids. While none of them were even close to the muscularity of today’s bodybuilders, their strength was quite legendary. Because of the advances in technique and specific practice done by Olympic weightlifters, those lifts – the snatch and the clean and jerk – have been improved greatly over time. However, there were certain lifts performed around a hundred years ago that still stand as records to this day. In fact, they may never be broken.

Let’s look at some of the strongman themselves, what they accomplished, and a few words regarding how they felt about strength.

One of the impressive old lifts is the bent press as done by Arthur Saxon. This is a rare exercise you won’t see much of today where a barbell is put overhead with one arm. Unlike a standard press, you’re not really pressing the barbell. In fact, you’re bending down and getting under the weight as the arm is straightened. Arthur Saxon successfully put 370 lbs. overhead in this manner. That’s more weight lifted overhead with one arm than most people can lift off the ground with two.

Here’s a quote from Arthur Saxon’s The Development of Physical Power that regards not just strength, but endurance, and health:

“Genuine strength should include not only momentary strength, as proved by the ability to lift a heavy weight once, but also the far more valuable kind of strength known as strength for endurance. This means the ability, if you are a cyclist, to jump on your machine and ride 100 miles at any time without undue fatigue; if a wrestler, to wrestle a hard bout for half an hour with a good man without a rest, yet without becoming exhausted and reaching the limit of your strength. Apart from sports, enduring strength means that the business man shall stand, without a breakdown, business cares and worries, that he shall be capable, when necessary, of working morning, afternoon and night with unflagging energy, holding tightly in his grasp the reins of business, retaining all the while a clear mind and untiring energy, both of body and brain. The man who can miss a night’s rest or miss a meal or two without showing any ill effect or without losing any physical power is better entitled to be considered a strong man than the man who is only apparently strong, being possessed of momentary strength, which is, after all, a muscle test pure and simple.” 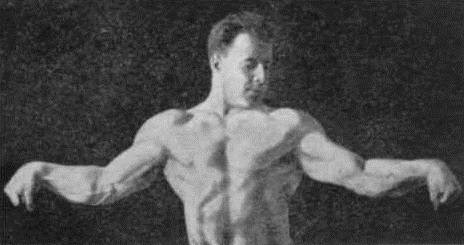 Jowett grew up as a sickly kid, but this developed in him a great desire to become strong. And he did. No slouch in the bent pressing department, he successfully put 285 lbs. overhead in that same manner. He also did a strict one-arm military press of 140 lbs. I don’t know of many people alive today that could match that.

Jowett’s most famous book, The Key to Might and Muscle, contains the following:

“The truth of exercise lies in the value it accumulates, and like a steadily growing bank account, it develops and earning power.” 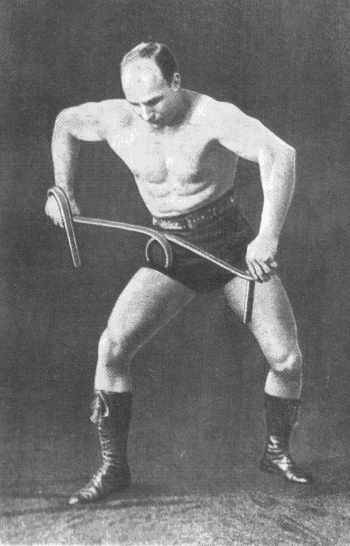 Alexander Zass wasn’t a weight lifter. Instead he performed in the circus as a strongman, where he was known by his stage name the Amazing Samson. Some of his feats of strength included bending thick pieces of steel. In fact, as a prisoner during World War II he successfully used his strength to escape his shackles and gain his freedom. (And it was just one of several times he escaped imprisonment!)

Here Zass offers his secret, in his autobiography, The Amazing Samson, to becoming strong:

“The secret of all improvement in feats like this is gradual progress from one stage to another, the severity of the test only being increased by degrees that are hardly noticeable.” 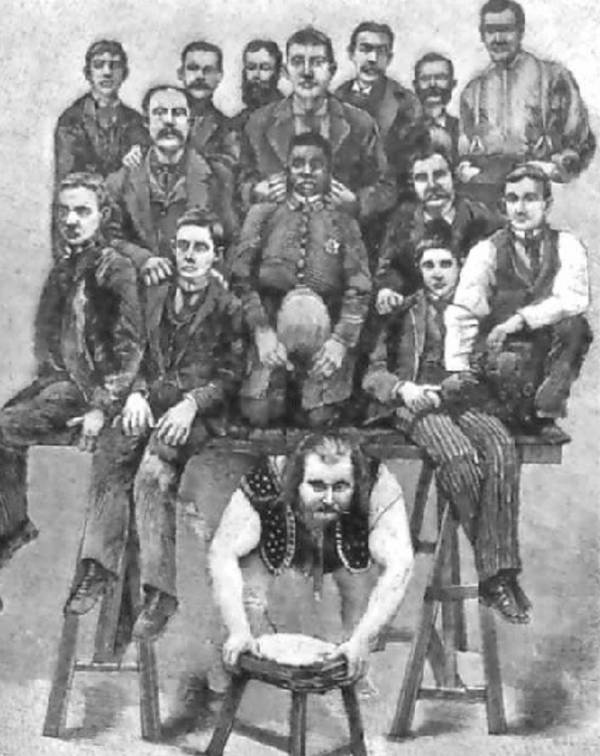 Louis Cyr was a large man. In fact, an upcoming French movie is being made of his exploits. One of his most famous feats was the back lift. This is a very short-range lift or support. A platform was placed across his back and 18 men got on top of it. Using his legs and arms he supported a total of 4337 lbs. in this manner.

“Greater than ever he felt the power of his conquest, and on every trial of force he strove to outrival his previous best performance. Big as he was, Louis was never lazy. He was a rare fighter. Put him up against something that was more difficult than he had encountered, and it was as though he was smitten upon the shoulder with the Titan rod. He would rise like a giant from his fastness and hurl himself against his material foe. There was no laying down for him. He eyes would snap with fire as his frame responded, and he has been known to lift until he bled from his exertions.” 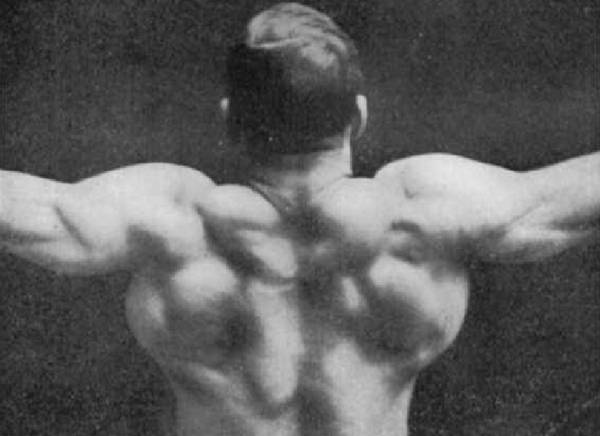 Max Sick decided to change his name when he came to the conclusion that having Sick in his name would not be useful in teaching people health and fitness. He was the biggest advocate of a form of exercise known as muscle control. This involves the controlled flexing and relaxing of muscles. And he credited it for his weight lifting success, which included being one of the first people ever to put double bodyweight overhead in the jerk. At a weight of 145 lbs he lifted 322.5 lbs.

Here Maxick explains how muscle control will not only make you stronger but will increase your mental powers of concentration as well:

“THE SERIOUS student of muscle-control will soon become aware of the fact that his willpower had become greater, and his mental faculties clearer and capable of increased concentration. Thus it will be observed that the controlling of the muscles reacts upon the mind and strengthens the mental powers in exactly the same proportion that the control of the muscles strengthens the body and limbs.”

Lessons of the Old-time Strongmen

There are many lessons we can learn from these old-time strongmen. The way they trained was as different as it is among people today. Arthur Saxon favored long sessions with lots of heavy weight lifting. Maxick practiced controlling his muscles daily and only trained with weights enough to practice the technique in them. Jowett was a fan of started his pupils off with free hand exercises then moving towards weights in the future. Some liked to train to failure, although that term wasn’t used back then. Though more often then not, the majority of them said to exercise without creating too much fatigue and not to work out the muscles. 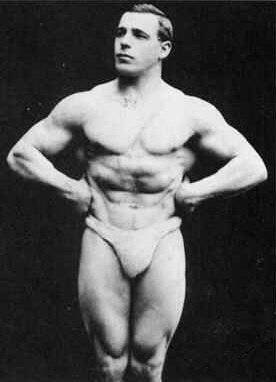 The selection of exercises they used also differed amongst strongmen, but in general, there was quite a bit more variation than you see in many gyms today. The focus was seldom on isolating exercises. Machines for lifting had not been invented yet. Everything was full body, with just changes in focus. In competitions there weren’t two lifts (like in Olympic lifting) or three (as in powerlifting) but many more. The British Amateur Weight-Lifters Associaion (BAWLA) had 44 different lifts that it kept records for. These included one hand swings, one hand deadlifts, hold out in front, two hands clean and jerk with dumbbells, and others. In any case, more lifts led to more well rounded weightlifters and athletes.

The old-time strongmen were also all advocates of natural food. And that was back in those days – I could only imagine what they would say about our food supply today. For them, it was a simple matter of eating more food if you wanted to put on muscle along with lifting. Obesity wasn’t nearly the problem back then that it is now, but the case for correcting being overweight was just as simple. Eat less.

Lastly I will add another important difference between modern training and old-time strongman training. For the strongmen there was always a call to focus on what they were doing. With more mind power behind whatever exercises you do, you will bring better results than if you do it mindlessly. Furthermore, you must stay focused on your end goal to achieve truly great results. If you want to become super strong it takes dedication to do so. This is one thing every strongman would agree on.

There is a lot more to learn from these great athletes of many years ago. And if you can take just a few ideas from them regarding strength, and even their training methods, you too should be able to become as strong as you need or desire.