Get the Rhythm in Your Bones for Safer Squats

The bad squatting advice of the past has led to so many injuries. But now we know it’s all about the flow.

I love to squat. It’s by far one of my favorite exercises. It took me a long time to fall in love, but once I did, I was long gone. But it has not always been a great relationship. A few of my most painful moments have been caused by technique breakdowns that resulted in some monumental back blowouts.

I thought I was bulletproof for most of my lifting career. I was the guy who would walk in, hit ten kettlebell swings, and then start loading the bar. My first big accident was underneath 465lb. On my fourth rep, I felt a pop. I spent the next two weeks in pain. The next time was a measly 185lb. On the very first rep, that pop was more like a bomb going off. Another two weeks laid up.

Because of how the spine is loaded in a back squat, when something goes wrong, it’s often catastrophic. For me, a tight psoas led to my demise. I was afraid of further injury, so I went on early retirement from squatting and took several years off. I was heartbroken.

And then I found Dr. Eric Cobb and Z-Health Performance Solutions. Z-Health is a remarkable system that puts the nervous system in the spotlight. I decided to study with Eric in 2007 and completed my training in 2009. Among the hundreds of gems that I learned while studying, bone rhythm was one of the most impactful and immediate fixes for my squatting woes.

The Guard on Duty

Before we can dive into bone rhythm, we need to understand how the brain operates when it comes to performance. The brain and nerves combine to form the Central Nervous System, or CNS. The CNS is responsible for managing, operating, and controlling every system in the body. From breathing, to our sensation of pain, to hitting a PR in a barbell snatch, the CNS is the master controller.

The brain’s number one duty is to keep us alive. If the body is telling the brain that there is a problem – from a jammed joint, nervousness or fear, or even a poor eye position – the brain will begin to pull the plug on our ability to fully produce muscular force so that we don’t hurt ourselves.

If you have trouble getting this deep, the problem may be between your ears, not in your legs.

The brain is like a security guard who is always on duty. If it finds any kind of issue that could potentially be a threat, it will power down the system to ensure safety. What constitutes a threat? Almost anything. An uncomfortable room temperature, sleeping in an awkward position, or the angle of your head during a lifting attempt all could be something the brain decides is a threat. When that happens, the security guard goes on duty and we are left with what he decides is safe. This can result in large percentages of strength and power being stripped from the system. It can also manifest as pain.

Pain is simply a message to the body that something is wrong. In the case of severe pain, something is very wrong. The brain wants you to stop. Once an injury has happened, the brain locks the system down so that person will stop hurting themselves. Muscles in the neighborhood seize up to protect the injured area and the athlete is functionally immobilized. It’s quite an elegant system, when you think about it.

The Bad Old Days of the Squat

Some of you old-timers probably remember the old trends in squatting technique. I’ve been in the weight training game for almost thirty years now, and I can remember having next to no coaching. We just got under the bar, went as low as we could go, and then found a way out of the hole. Remember “toes up” squatting? How about the sit back-back-back squat, where it damn near was a good morning before we started bending our knees? I’ve tried them all, and been punished for doing so.

Regretfully, some of these techniques are still taught today. In an attempt to get their weight as far back into the heels as possible, many lifters been coached to sit as far back as they can before beginning to lower their bodies and the bar. Some lifters bend the knees first and the hips have to catch up, which is just a hot mess.

The biggest issue with all of these variations is that they kick up our threat response.

What Is Bone Rhythm?

In the squat (or lunge), the bone we are speaking of is the femur. When the leg moves during the squat, the pace of the proximal head of the femur in relation to the distal head determines whether or not we are in rhythm. In other words, how fast is the hip bending compared to the knee? In a sit-back squat, the hip begins to move before the knee begins to bend, so the pace or rhythm is off. We are looking for a synchronicity in the flexion of the two joints. If the hip moves an inch, the knee should move an inch. That is bone rhythm.

Hinging at the hip, or worse, bending the knees before the hip moves, disrupts this rhythm and can set off a threat response. Even if the joints start together, one of the two can get ahead of the other and disrupt the rhythm. This sends a message to the body to stop, and the system-wide lockdown begins. Bone rhythm eliminates this threat in the squat.

To the CNS, a threat is a threat, even if you aren’t immediately aware of it. Just because you aren’t bellied over in pain and agony doesn’t mean the threat response hasn’t started tightening muscles up in an attempt to protect the area that is giving off the signal.

In the case of my back episodes, my psoas would seize up on my left side. The psoas is an extraordinary muscle that attaches directly to several vertebrae. Now, take a big guy who’s under a heavy load, and using a threat-inducing technique (sit-back). It makes sense that the brain would decide to protect me by tightening the muscles in the vicinity. BAM! My left psoas would seize, literally yanking my spine out of alignment.

You don’t have to load a bar up with a ton of weight to experience the benefits of bone rhythm. Stand up and try this with just your body weight. Remember, you are trying to synchronize the bending of the knee and hip so that they mirror each other. It might take you a few tries to feel it, but when you do, you will know.

Almost out of the gate you will feel two major benefits:

I was working with an intern the other day, and he couldn’t hit an ass-to-grass squat without his heels coming off the ground. In ninety seconds, I explained bone rhythm to him, showed him what I wanted, and asked him to try it. The very next rep, he hit bottom and his heels were firmly planted on the ground.

In that example, there was a visible threat response in his squat. His ankles would begin to neurologically tighten to protect him, limiting dorsiflexion. When his rhythm was corrected, his ankles were not put on lockdown by the CNS, and he was able to squat fluidly without any restriction. 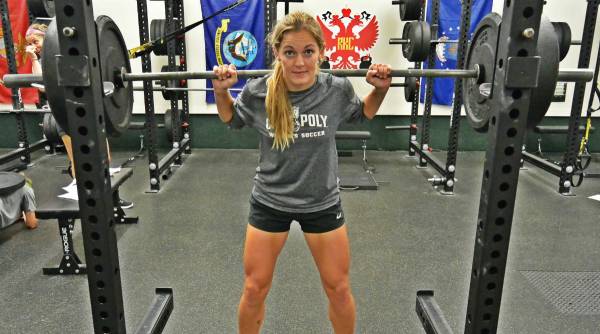 Don’t rush the movement. Slow down to feel the rhythm, until it becomes automatic.

As you squat, remember that speed is irrelevant. Your first time out, you will likely dive down into the squat. That’s because the only way to get this sensation is to speed it up. I urge you to really take your time. At first, go as slow as possible. Have a training partner or coach scrutinize your movement so he or she can alert you when the rhythm gets lost. It won’t take long to identify how to pair up the two joints. Within moments, you will find a cozy groove. Don’t speed the process up until you can automatically pair the joints.

This technique can accommodate many of the engrained motor patterns you already have. If you insist on sitting back as far as you can, you can still maintain a quality bone rhythm while forcing your hips back. If you are a “straight down” squatter, you are probably close to doing this already. Just monitor your speed and become comfortable with the idea of bone rhythm before loading a heavy attempt.