High grip strength and your marital state have been found to correlate independently to a healthier life in old age. So, researchers decided to see what the combined effect of a strong marriage and a strong grip would have on the quality of life in older age. Sarcopenia, the loss of muscle as a natural part of aging, does mean a decline in health over time, but research from Columbia University’s Mailman School of Public Health investigates how grip strength relates to being married.1

“Our results hint that women may be favoring partners who signal strength and vigor when they marry,” said Vegard Skirbekk, PhD, professor, Columbia Aging Center and Mailman School professor of Population and Family Health.

“If longer-lived women marry healthier men, then both may avoid or defer the role of caregiver, while less healthy men remain unmarried and must look elsewhere for assistance.”

These data were matched with the Norwegian national death registry. Hand grip strength was assessed using a vigorimeter, a device that asks participants to squeeze a rubber balloon.

Grip strength is particularly important for older adults and has implications for a host of health risks—for heart disease and fractures, physical mobility, the capacity to be socially active and healthy, and to enjoy a good quality of life. At the same time, marriage confers many of these same benefits. 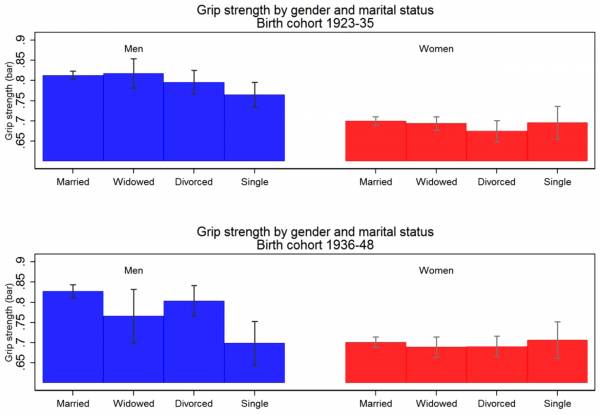 The researchers found greater numbers of unmarried men with low grip strength in the second cohort—those born 1936-48—than in the first cohort, reflecting societal trends that have increasingly deemphasized the importance of marriage.

“In recent decades, women are less dependent on men economically. At the same time, men have a growing ‘health dependence’ on women,” says Skirbekk.

“The fact that many men are alone with a weak grip—a double burden for these men who lack both strength and a lack of support that comes from being married — suggests that more attention needs to be given to this group, particularly given their relatively poor health.”

Policies to help this population might include housing arrangements that encourage social interaction and counseling to better prepare these individuals for old age and information on how to avoid negative health consequences of independent living.

“New technologies may potentially offset some of the limitations that low grip strength may imply,” says Skirbekk. “Social policies could also increasingly target this group by providing financial support for those who suffer the double-burden of low strength and lack of spousal support.”

The Limitations of this Study

We’ve had some fun with this but there are limitations to this kind of research. For one thing, this research shows a relationship between grip strength, martial status, and health but it doesn’t really offer any direction on causality such as the origin of grip strength earlier in life or the quality of the marriages in question.

This is an analysis of data that shows observable patterns of behavior but can’t really say that the secret to a great relationship is for a guy to go and practice his grip strength. Just in case you wanted to know, you might want to take grip advice from legendary Strongman, 68-year old Odd Haugen of Newbury Park, California, and his formula for strengthening your grip.

Douglas Perry is a journalist who turned his passion for technology into his profession more than 20 years ago. Since then, he followed, reviewed, and wrote about trends and products that define our mobile lifestyle today. He helped create several technology publications in Europe as well as the US in the past; these days, Douglas earns his living as a technology product and content strategist.

Three teenage athletes at home keep him busy during his free time, but have allowed him to get just enough training time in to remain competitive in road cycling and swimming. Less frequently than he would want to, Douglas manages to squeeze a Criterium ride in his schedule, and occasionally a casual bike race and a 5K with his kids.