In January of 2011 Dale started Dale’s Raw Foods and began handcrafting his own raw vegan protein bars. Little did he know it would turn into a million dollar business in only 18 months.

Dale Buchanan likes things his way. And that’s a good thing for the raw food industry and as an example of how to run a small business successfully. As the owner of Dale’s Raw Foods, Dale started with almost nothing and in just eighteen months he is running a million-dollar business, selling mainly all online and with hardly any advertising.

Since 1982, when Dale was a senior in high school in Washington D.C., he has been involved in the fitness industry. He studied nutrition as a teenager and trained clients with weights. Arnold Schwarzenegger’s movie Pumping Iron was a huge sensation and inspiration then and bodybuilding had become extremely popular.

That’s where it all began, and every step since has been a conscious effort for Dale to improve his own physical fitness as well as find the right fit to help improve other’s fitness. Along this journey, he became proficient in a couple martial art forms, learned the ins and outs of managing a fitness business, and a couple years ago he became an RKC instructor in an effort to combine modalities for what he feels is the best workout.

Four years ago, Dale came to South Florida with a job offer to run a Gold’s Gym. The job lasted one week. And though South Florida is oversaturated with personal trainers and gyms trying to make it – Dale calls it the “Mecca for coming and going in the fitness industry” – he decided to stay. He felt with his experience, knowledge, and business savvy he could make it despite the odds.

Though Dale’s gym, Supreme Ultimate Fitness, in Boca Raton continues to do well, his most recent and what has proved to be his most impactful endeavor was starting Dale’s Raw Foods in January of 2011. This particular venture was born from Dale seeking the best way to heal himself. In 2010 when Dale started teaching kettlebell workshops, he was not feeling well and decided to go on an extensive raw food cleanse with the guidance of a hydrotherapist to clear up life-long digestive issues and skin problems. He felt great after the cleanse, but he noticed that he lost a good amount of muscle mass. He felt if he was to continue with a mainly raw diet, he would have to find higher concentrations of raw protein sources. Though there were raw protein powders on the market, he could not find a raw protein bar that fit his standards of nutrition and taste. He decided to make his own. He began passing out his homemade bars to his personal clients and to those taking his RKC workshops. They were blown away by the taste and the nutritional content. Every client and friend who ate his bars all said one thing: “You have to sell these to the public.”

Dale knew the fitness industry, but he knew nothing about the food industry. He rejected the suggestion for a while until the urgings could not be ignored. Dale knew how good the bars were, and apparently so did everyone else. Stepping into unchartered territory, Dale decided to go for it after his friend and fitness marketing specialist Rocco Castellano told him this was his calling. 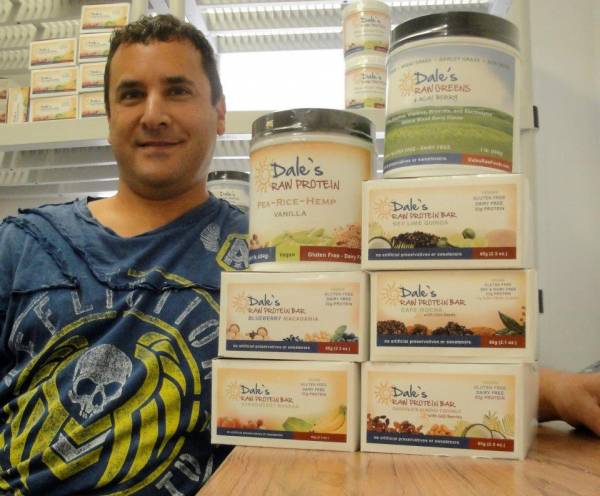 With only one hundred and fifty dollars, he built a website, made a logo, and contracted out the manufacturing of the bars. Dale couldn’t believe he sold two thousand dollars worth of bars in the first month. After two months, molding and quality issues caused Dale to fire the contracted kitchen. He rented out a commercial kitchen to hand make the bars his way. Then the business really took off. All sales are done online. The bars are also promoted and sold through his connections in the fitness industry.

In August, Dale built his own, brand-new commercial kitchen where “only raw foods have ever touched the machines.” He built the kitchen with personal credit cards and the money he earned from sales during the first few months in business. He took out no loans, had no investors, and most importantly, he now has no debt. “This is a cash only business. We only buy what we need and have the money to spend,” says Dale. “I built a million dollar business through my fitness connections even though I started with almost nothing.”

The bars themselves are all vegan, gluten-free, chemical and preservative-free. They are not dehydrated, but packed immediately and shipped fresh. Most impressively, every bar is still handmade. They use raw nuts, seeds, and fruit, plus hemp, pea, and brown rice protein. As a sweetener, Dale uses mainly dates and some coconut nectar. Each bar packs twenty-two grams of protein. Dale now sells a variety of other products such as his proprietary protein powder, and his newest venture – a raw recovery powder. “You don’t have to be a vegan to enjoy my products,” Dale says. “Most people who buy the bars are not vegan, yet they appreciate the fact that they get the highest quality ingredients from plant-based sources in their diet.”

Dale shared what he feels is his most important message for other budding fitness entrepreneurs:

There’s a lot of trust developed in our industry, and if you have an idea related to fitness or to health and wellness, do it. Follow that dream and do it. I think a lot of people come up with good ideas and feel it’s not possible, but I’m here to tell you that it is possible. Start slowly and build it up. Don’t get in over your head. Just get your product out there.

Dale’s tenacious drive and sticking to what he knows is best when running a business and making a high-quality product contributes to his success as well.