The other day I was talking with a colleague of mine who just so happens to be a medical doctor. All the anatomy, biomechanics, and nutrition classes that we, chiropractors, are exposed to during our academic studies enamored him. He shared that he was surprised his schooling had left much of that stuff out. I think he was let down by that. It made me proud, however.

For a good three and half years of my life, after completing my undergraduate degree at Texas A&M University, I studied the human body. I spent hours in a classroom, studied cadavers in lab, and palpated as many humans as possible. Chiropractic school gave me a solid foundation of the human body and movement. It wasn’t until I became immersed in CrossFit, however, that I began to truly see the strength and adaptability of the human body. I began to understand the dynamics of each individual. In many ways, watching CrossFit was a case study of biomechanics in practice.

As a chiropractor, I’ve been treating CrossFit athletes for almost four years now, from beginners to Games competitors. As a CrossFit athlete myself, I’m still a novice, having only been doing CrossFit less than a year. As a doctor, I would get CrossFit athletes coming into my office saying things like, “Yesterday when I was snatching…” or “During my fourth round of kipping pull ups…” I had a general idea of the movement, but honestly, no true understanding of the movement. It’s been a joy to dig deep into what my patients do each day. It’s important to me to relate to my patients and their endeavors.

As my journey as a CrossFit athlete matures, so too does my career as a chiropractor. In the last year, I’ve developed internally which has resulted in numerous benefits in all aspects of my life.

As a CrossFit athlete, I’ve learned to be present at a particular moment of time. One of my favorite coaches always says, “Concentrate on the task at hand.” Nothing else matters other than that hang clean you are about to conquer or that pull up you’re about to nail. This translates into me, Dr. Mathews, being fully present with each patient of mine and connecting energies from the beginning of the appointment to the end of the appointment.

I’ve learned to confront adversity and conquer what lies before me. There are times when I’ve faced a barbell that weighs more than me, but I try to keep things simple and let my body do the work. There are long grueling workouts I’ve faced in 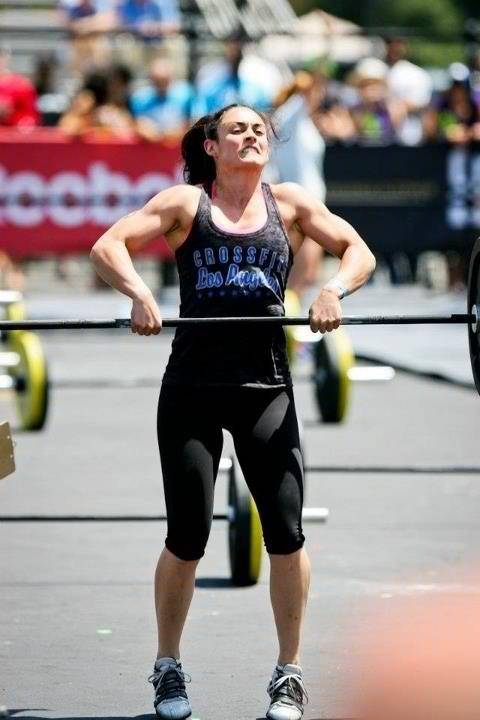 which I’ve had to break them up in my head so that I stay moving and feel the progression throughout. The long chipper workouts I actually love because I feel like I’m checking tasks off of a to-do list. As a doctor, when I first started practicing, I made numerous small goals that I began to check off, which led to bigger goals. And believe me, sometimes there is nothing that a good cry won’t fix, whether it be a workout or bad day in the office. By conquering skills and workouts in CrossFit, I feel empowered and unstoppable.

As a CrossFit athlete, I’m training for this thing we call life. In Greg Glassman’s Foundations he states, “The CrossFit Program was developed to enhance an individual’s competency at all physical tasks. Our athletes are trained to perform successfully at multiple, diverse, and randomized physical challenges.” As doctor, woman, and athlete, my goal is to be the fittest I can be so that, someday, I can bring a healthy child into this world. I believe in practicing what you preach and through CrossFit I think I am able to embody that healthy lifestyle.

Anyone who views CrossFit as a purely physical experience is missing the boat, in my opinion. I’ve grown mentally as much or more than I have physically while training CrossFit. Though it may sound corny, when I walk up and see that whiteboard for the first time each day, I truly believe I’m training mentally for the tasks (patients) that walk into my office each day. I see an ailing human body as a problem to be solved – much in the same way that today’s AMRAP is a task that needs completing. Efficiency, the ability to adapt, and success both in my office and in the gym are more similar than they are different in my opinion. In that regard, I owe a big thank you to CrossFit.

Lindsey Mathews is a chiropractor who specializes in the biomechanics of the body and balancing the musculoskeletal system. She focuses on women’s health, perinatal chiropractic, and pediatrics. Lindsey aspires to create purity in pregnancy in today’s modern world and empower women to become “birth fit.”

Lindsey was born in Houston, Texas. She grew up on the river in New Braunfels, Texas. During high school, Lindsey participated in cheerleading and played soccer. While in college, she played intramural soccer and maintained her gymnastic skills while working at the Center for Student Athletes at Texas A&M. She is the proudest member of the Fightin’ Texas Aggie Class of 2005.

While on a medical mission trip to Tanzania, Africa, Lindsey decided that she wanted to enhance people’s lives in a natural way - without pharmaceuticals. Lindsey decided to become a doctor of chiropractic. She moved out to Los Angeles and completed her doctorate at the Southern California University of Health Sciences.

Lindsey worked at the International Sports Performance Institute from 2009-2012. She currently works at the American Health Lasers Los Angeles Clinic. She also owns her own business that specializes in pregnancy lifestyle coaching. Lindsey has treated numerous active people such as Olympic and professional athletes, CrossFit athletes, and CrossFit moms, and traveled the world to be on set for demanding stunts in film and television.

Lindsey practices what she preaches. She eats a paleo diet, exercises five to six times a week, gets adjusted, and takes fish oil. She currently is enrolled in and donates one weekend a month to the International Chiropractic Pediatric Association (ICPA). She is immersed in research and is relentless in her mission to naturally improve the lifestyle of women, mothers, children, and others. Lindsey lives with intention and is a proud member of Team Original.