Eating disorders a staggering number of people in the United States. The National Association of Anorexia Nervosa estimates that 1.5% of American women will suffer from anorexia in their lifetime. What’s worse is that most eating disorders (bulimia, anorexia, binge eating disorder, etc.) are often accompanied by mood and anxiety disorders. Up to 10% of women suffering from eating disorders will end up with substance abuse problems.

The effects of eating disorders on the body are very visible—everything from drastic weight loss to pale skin to noticeable frailty. But did you know that eating disorders also take a toll on the mind? According to one study, eating disorders can affect the way your brain controls your need to eat.

A team of researchers at the University of Colorado Anschutz Medical Campus found that women with eating disorders have the ability to override the neurological imperative to eat. They studied over 50 women—half of whom had eating disorders—to see how their brains reacted to sugary flavors.

Brain scans showed that the women suffering from eating disorders suffered from noticeable alterations in the brain pathways that governed appetite and taste-reward. The white matter in the brain and the hypothalamus of these women was significantly different from the healthy women, with weaker influence on the body and opposing directions of brain signals.

The hypothalamus is one of the appetite centers of the brain, so one of its jobs is to ensure that you get enough food to survive. In the cases of women with bulimia and anorexia, their brains had been rewritten by their eating disorders. Their avoidance of sweet foods (seen as “rewards” but also perceived as the foods most likely to cause weight gain) not only led to mental conditioning, but actually rewrote the circuits in their brain responsible for controlling food intake and appetite. Fear of eating certain foods may negatively affect the hypothalamus. 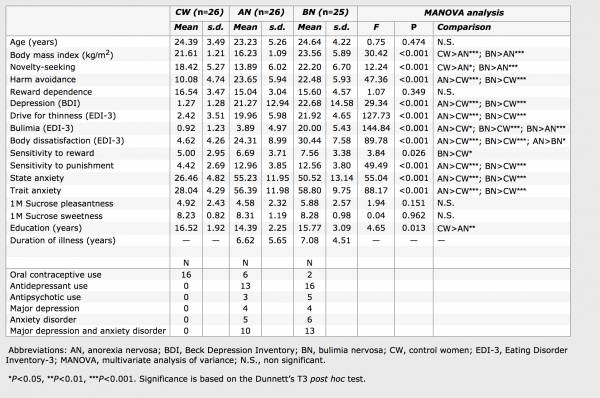 It makes sense that so many women with eating disorders also suffer from mood and anxiety disorders. The hypothalamus plays a central role in your emotional state. If that part of the brain is being rewritten as a result of the eating disorder, it stands to reason that the changes go beyond just your desire to eat.