How My Jacket Convinced Women to Try Weight Lifting

As a coach I was blessed with a genetic predisposition for packing on muscle and sometimes inadvertently frightening female prospects. So my jacket became my tool for initiating women into the gym.

My co-worker Michael came into my office and said, “You’re going to want to put on your jacket for this one.” It was a sunny afternoon in Los Angeles, and as one of the head coaches at CrossFit LA, it was part of my job to meet with prospective students and conduct an introductory session. Despite the fact that it was warm out, Michael felt I ought to wear my jacket.

My co-worker Michael came into my office and said, “You’re going to want to put on your jacket for this one.” It was a sunny afternoon in Los Angeles, and as one of the head coaches at CrossFit LA, it was part of my job to meet with prospective students and conduct an introductory session. Despite the fact that it was warm out, Michael felt I ought to wear my jacket.

Michael suggested my jacket because he figured I would scare off the prospect otherwise. You see, as it turns out, the state of your womanhood is directly related to the size of your biceps. At least that’s what I’ve discovered. Or rather, I’ve discovered that’s what other people decide when they meet me. And I know I’m not the only one dealing with this issue. In fact, it’s only called an “issue” because women at all locations on the masculine-feminine spectrum are struggling to identify themselves and muscle size seems to be one criterion.

Michael had met my prospective female client at the front door and after a brief conversation surmised that she was not interested in “bulking up.” I, on the other hand, was blessed with a genetic predisposition for packing on muscle and sometimes inadvertently frightening female prospects. So, my general approach was to wear my jacket, get to know the person, and if it seemed appropriate I would remove layers of clothing later in the intro session – like when I was demonstrating proper pull up form for the assessment workout.

Some women were inspired by seeing me do a pull up. They really wanted something like that for themselves and it seemed unfathomable. “I love your arms,” they would say. “They’re so toned.” Other times I would keep my jacket on through the whole intro, stifling as it might be. I could tell when a particular woman wanted to be fit and needed healthy influences in her life, but maybe wouldn’t understand that no matter what she did her genetics wouldn’t allow her to look like me.

Some women just have this fear of “bulking up.” A fear of looking like a man. A fear that growing muscles will slide them down to the wrong end of the masculine-feminine spectrum. And no matter how cute I looked in my lululemon gear, if I wore make-up and a ponytail, too, my bulbous biceps always led these women to believe I was somehow less female and they backed away from me.

This particular day I ended up taking the jacket off on purpose. After talking with the visiting woman about her goals I realized that our gym just wasn’t a good fit for her. She wanted to do cardio and Pilates. She was curious about weight lifting, but it wasn’t for her. Her friend told her to check out CrossFit, and I think she had scheduled an intro out of obligation. Suspecting it was also possible the woman had shown up because of ego, because she didn’t want her friend to outdo her or think she wasn’t good enough for CrossFit, I didn’t want to straight out tell her that she shouldn’t join our gym. I feared she might join out of spite, which would be no good for either of us. So, I decided to let her come to the obvious conclusion on her own.

And then she actually said it out loud, which I have to say I respected. “No offense,” she said, “but I don’t want to look like you.” And in her mind all women who did CrossFit ended up looking like me. Muscly. Manly. “I get it,” I replied. “It’s not for everyone.” And I let her believe what she believed so she could move on, guilt free, and find the right place to fit her mind and her goals. 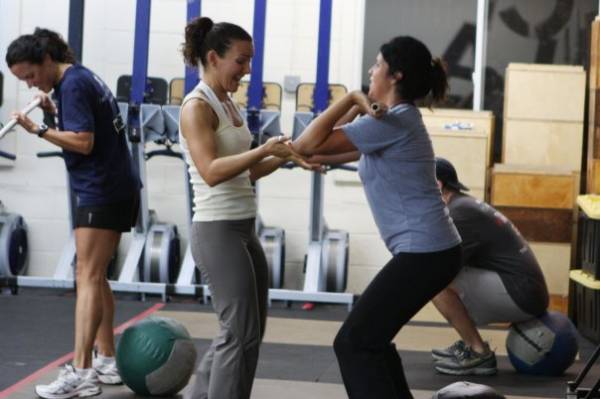 Were I more stuck on myself and less interested in her finding the right home, I might have said, “No offense, but you couldn’t look like me if you wanted to.” And I wouldn’t have said it out of ego, but based on the truth that I’d look like I look no matter what gym I belonged to. It’s how I am. Like many other men and women, I come from a long line of strong, blocky people. Only it’s cool if you’re a man, not so much if you’re a woman. Truth is, I couldn’t be waifish if I tried (and in my younger years I did indeed try). Just as this woman I met that day could never really be bulky, but the fear of manliness kept her from ever dipping her toes in that water, the murky water of lifting weights.

And that’s why I wore my jacket. My passion was to share the confidence and freedom that strength training brought to me – the love for my body and what it could do that grew in me as my muscles grew. I knew I wasn’t alone in this struggle with my body, and I knew other women could benefit, mentally and physically, from lifting up heavy stuff. The last thing I ever wanted was to frighten a woman – of any size of body type – away from her possibilities and potential simply because I have short limbs and maybe more testosterone than the average girl. So I continued to make that strategic choice, to wear the jacket or not to wear the jacket, to inspire with demonstrations or to carefully lead to the edge of the stream.