How often have you heard the advice to pedal in circles? This seems a logical statement considering that the means of propelling a bicycle is to rotate the pedal cranks and the only way to do this is to apply a force that is acting at right angles to the crank.

Our legs are very good at pushing down using the large quadriceps muscle group, calf muscles (gastrocnemius and soleus), and gluteal muscle groups. However, the muscles that perform the actions to pull backwards and up (hamstrings group, hip flexors, and anterior tibialis) are a lot weaker.

If we were to plot the force applied to the pedals as they rotate through a full circle, we get a diagram that looks like this: 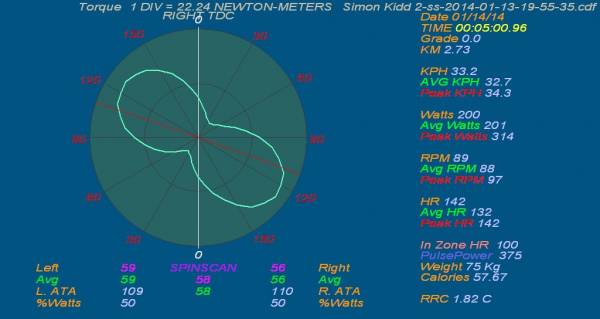 The chart (produced on a Computrainer) shows the amount of torque applied to the rear wheel as the pedals rotate.

The advice to smoothly pedal in circles, makes the reasonable assertion that by deploying a range of muscle groups to apply force for the full pedal rotation (push down, pull back, pull up, push forwards) more energy can be applied – or more efficiently applied – than simply pushing the pedals down. From a qualitative perspective based on my own experience and that of those I coach, trying to apply a more circular pedalling pattern certainly seems to increase speed. Although I have been unable so far to find much independent research that would support the efficacy of a more circular pedalling style.

So, this year I thought I would put some numbers on this in a personal trial. My hypothesis is that if I could “improve” my pedal stroke, this could be shown by being more efficient at a fixed power and cadence. Over the next few weeks I will be trying to improve my pedal stroke expecting to see some greater efficiency. Initially, I analyzed my pedal stroke after a warm-up during a five-minute session holding 200 watts at a cadence of 90rpm. I then repeated this test while attempting to pedal in a more circular manner, and again at the end of a 45-minute interval set.

The first picture (above) was from my first session. It shows that my maximum pedal force is a little late, as the pedal has already passed the horizontal position. Both legs are similar, producing equal amounts of power, but the left leg has a slightly better ratio of peak to mean power (59 vs. 56). My end heart rate was 142 beats per minute.

This next picture is from my attempt at pedalling more effectively: 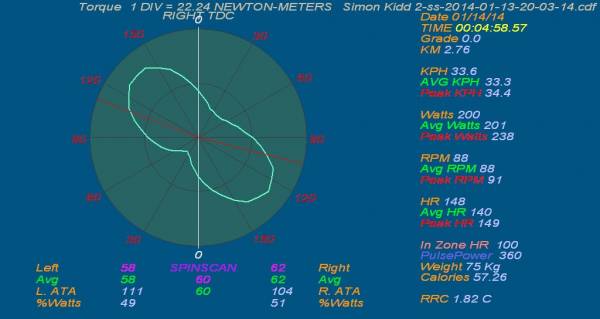 The diagram looks slightly more rounded and the peak to average torque ratios are slightly higher (58 vs. 62). I did find this required significant concentration and it did feel harder as muscles were recruited in a slightly different manner. This is also reflected in a higher heart rate.

The test at the end of the interval set was very similar to the first test.

It takes several thousands of repetitions to recruit muscles in a slightly different way and so I was not expecting an immediate improvement. While it may subjectively allow me to create more power out on the road, trying to pedal in an unnatural, more circular pattern than normal was actually less efficient for me as exhibited by the higher heart rate. It takes several thousand repetitions to acquire a new motor skill, and up to 91 days according to research by Philippa Lally, so I should only be expecting a natural improvement by practicing over a significant time. Thus, I will be practicing this over the next few weeks and report back in another article.

A lot more information can be obtained from a pedal stroke analysis and I will be looking at that next time. Have you experimented with your pedal stroke? What has your experience been? Post to the comments below.