Weight loss and low levels of body fat can have substantial impacts on health and performance, and those effects can be good or bad. In a recent review published by the Journal of the International Society of Sports Nutrition, the metabolic changes that occur during weight loss were examined in depth.

Being lean without sacrificing muscle is one of the most important physiological aspects for many sports. Because maximizing lean mass while minimizing fat mass improves both strength-to-weight and endurance-to-weight ratios, virtually every athlete benefits from being leaner, with a few exceptions.

In the study, investigators noted that the knowledge available for extreme changes to body composition is hard to find. Because of the nature and complexity of such a task, they chose to focus specifically on metabolic changes during weight loss that might be relevant to athletes and coaches.

Here are some of the key notes they found:

In general, both weight loss and low body fat were associated with more hunger, more catabolic hormones, and lower metabolic rate. This certainly is no surprise. It is interesting to note that despite increased catabolism through dieting, losses in muscle through dieting are generally insignificant.

Metabolic rate decreases with low-calorie diets, which can often frustrate athletes attempting to lose weight. Each of the four components of daily energy expenditure, including both resting and non-resting energy expenditures, were shown to decrease during dieting, and this reduction persisted for a time after the diet ended.

The mitochondria, which are where energy is created in your body, become more efficient with calorie restriction. 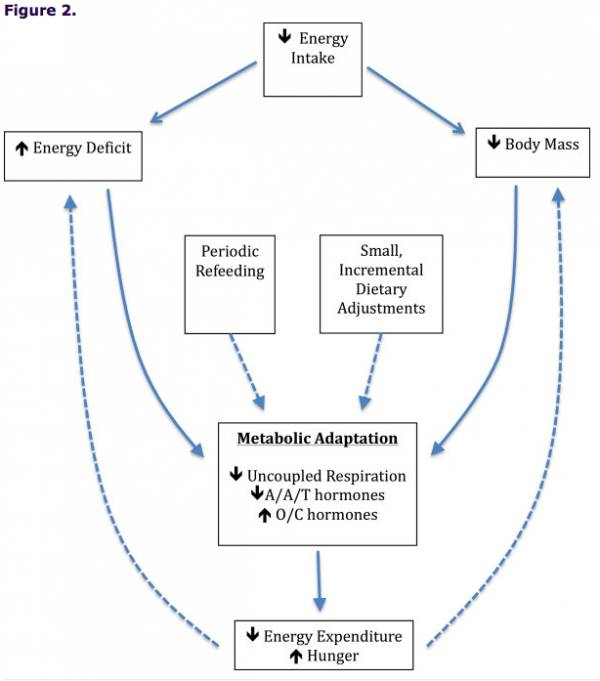 For athletes who have to lose weight, the researchers had a few recommendations. The first was to reduce calories only as far as necessary to promote weight loss, as extreme changes may exacerbate the negative effects noted above.

They also mentioned a technique called refeeding. Refeeding is essentially the practice of increasing calories for a 24-72 hour period weekly during dieting. Although the researchers noted it needs more research, it could potentially help keep favorable hormones chugging along. Finally, once the diet comes to an end, the researchers recommended a gradual increase in calories.

Ultimately, the research for athletes is fairly limited, and the outlook isn’t great if a lot of weight needs to be lost rapidly. Preventing weight gain to begin with seems like the best idea. If you need to lose a large amount of weight, it’s best to maximize your energy expenditure and minimize the need to cut a lot of calories.