How to Get Strongman Strong With the Bent Press

The bent press is a unique way to build strength, and it’s all about technique.

<strong”>The bent press is a unique lift that was once quite famous due to the strongmen of the golden era. But as it is quite technical, it was considered a trick lift by some and became largely discarded. But as we learned in my article on the Jefferson deadlift, just because something isn’t popular, doesn’t mean it’s not useful.

And frankly, I think we need more trick lifts in our exercise routines. And really, it is not just a trick. The bent press builds lat strength and the ability to handle massive weights overhead, which aids in other sorts of pressing.

Not to be confused with the bench press, the bent press gets its name because you bend over as you press the weight. Actually, the truth is you are not pressing it so much as you are supporting it while lowering your body to get under it. It’s essentially a moving support (which, I know, is a bit of an oxymoron).

Another name for the move is the screw press. This accurately describes how the exercise is done in that you screw your body under the weight, rather than just bending.

“For best results it is important to practice – a lot – and with light weights in the beginning.”

The reason for the bent press’s fame is that with this exercise (and, of course, after a lot of practice) you can put up a heavier weight with a single hand than in any other manner, including the one-handed jerk.

The record in this lift has stood for almost a hundred years now. The great Arthur Saxon did an amazing 370lbs in this lift. That’s a weight most people can’t even lift off of the ground with two hands. To put it overhead with one is barely believable.

Many other strongmen typically performed the bent press in the 200-300lb range. In my opinion, getting up to bodyweight-equivalent weights is pretty good. My current best in this exercise is 135lbs with a barbell as you can watch in the video below.

Lessons From a Strongman Legend

Since Arthur Saxon was so great at the lift I offer up his instructions on how to perform it followed by some of my tips in how to get started:

Having gotten the bell to the shoulder with the elbow firmly placed on the hip, the first thing to do is to get the feet in the proper position. As may be supposed, when one is pressing, say, 200 pounds, it is not easy to shift the feet about without destroying the balance, and causing the weight to fall. Therefore, get your feet placed in the correct position before you commence to press. Another point I will mention here is that the eyes must not at any portion of the lift, be taken off the weight.

Holding the bell at the shoulder, fall away from same, but do not allow the elbow to move from off the hip until compelled to do so, as you can support far more in this position, without tiring the muscles, than you could if you allowed the weight to fall on muscles alone, without supporting same rather by bone strength than muscle strength. In allowing the body to fall forward, the speed of the movement must be at all times governed by the balance you feel you have attained. Of course, it is best to get the lift over as quickly as possible, but a fair speed in pressing may be obtained only when it is felt that a perfect balance has been gained, otherwise to hurry will only be to cause the weight to fall. 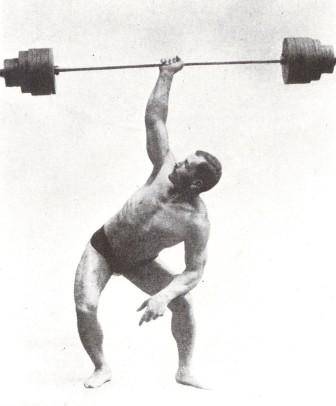 Another hint is that the bell should not be held any longer than absolutely necessary at the shoulder before commencing to press, as your strength begins to wane immediately as the bell reaches the shoulder. Having pressed the weight to a straight arm, then you must not endeavor to rise until you are certain that you again have gotten thorough control over the weight. Your position at this point should be such that your hand is held over your shoulder, which, in turn, should be over the shoulder belonging to the disengaged arm. This shoulder, in its turn, should be over the left knee, so that a straight line could be drawn from the right hand to the left foot, and if this line be broken or thrown out in any way, the weight, if a heavy one, will pass out of your control and fall to the ground.

If you feel that you are holding the weight firmly, then you may bend the right leg a little to bring yourself well beneath the weight, and by pushing firmly with the left hand or forearm at the left knee, you will be able to stand erect, when the bar bell may be changed from one hand into two, and so lowered to the chest and then to the ground. In the body press, I hold my elbow well to the back and fall forwards. Some weight-lifters hold their elbow more to the front and fall sideways, and such men, of course, will have to be very supple, and a disadvantage, to my mind, in this position is that in falling sideways the right shoulder has to be pulled up close to the right side of the face, and it becomes very difficult to lock the shoulder in its right position at the end of the lift, so that often such a lifter will press a weight to a straight arm, and then be compelled to drop same.

The barbell is probably the most difficult tool to use for this exercise because of its leverage and balance. You’ll notice that with any implement the weight turns as the exercise is done. So all it takes is a small slip up and the weight can come crashing down. Even getting the weight into place at your shoulder can be a challenge (and is an article by itself for a future time).

Easier, but still great to use are dumbbells or kettlebells. As the weight sits in closer to the hand, there isn’t as much of a balance issue. With the kettlebell, the weight is even below the hand and slightly behind your arm, which can help you to maintain the best position in this exercise. For these reasons I recommend starting out with a kettlebell as it helps pull you into the right position. 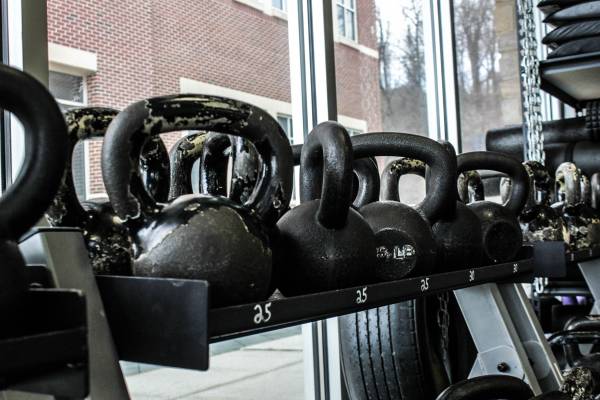 It’s All About Technique

Because most of us are so used to pressing weights, it can be hard not to press at all in this lift – to rely fully on our structure. My video above does not demonstrate perfect form as you notice once I am mostly bent over I end up pressing the weight slightly to get the final lockout.

While I recommend practicing this lift on both sides of your body, be aware that your non-dominant side will tend to lag far behind your dominant side. To put it simply, with my left hand this movement just plain feels awkward to do.

“With the kettlebell, the weight is even below the hand and slightly behind your arm, which can help you to maintain the best position in this exercise.”

Also be aware that this is a highly technical lift, just like an Olympic snatch or jerk. As such, for best results it is important to practice – a lot – and with light weights in the beginning. I wouldn’t be surprised to learn that Saxon did 20,000 bent presses in his life.

I recommend spending ten minutes or so simply working on the technique at the beginning of your workouts. After you’ve done that, then move onto your normal training. As learning and working the bent press should be treated as a practice, you might check out my other articles for more helpful hints in improving your “practice” skills .

Find Your Inner Strongman (or Woman)

It may be an old lift, and some might consider it a “trick,” but I say give the bent press a try. While it will take some time to get any sort of groove going, if you take to this lift, you may find just how strong you can become. Will you be the one who beats Saxon’s record?