Gait – the movement of our limbs during locomotion. Our gait changes as we move faster or slower, as well as when we change terrain.

Many people have poor gait mechanics that limit their ability to perform to their fullest potential. Sometimes this limitation results in pain. Other times there may be no pain, but perhaps diminished power, speed, or strength.

Gait is really how we move in any environment, hopefully in a natural movement. There will always be times when movement isn’t quite “natural,” such as skiing or rowing. But by adapting to our environment we can move efficiently and effectively.

RELATED: How Gait and Posture Change With Age and Exercise

The loss of proper gait often comes from injury patterns, both past and present, poor movement habits developed over time, and overall health. Believe it or not, your health and particularly your nutrition can actually influence your gait.

Refocus on the Mind-Body Connection

Natural gait movements are essential not just for proper joint mechanics, but also for a healthy nervous system. Take, for example, a quadrapedal motion (QM), such as the MovNat foot-hand crawl. This cross-crawl pattern is something we’ve all probably done in our lives, but most likely not for a long time.

When you revisit this movement as an adult, you’ve got to focus on it to redevelop the pattern. Perform the movement going backwards and you really have to concentrate until your nervous system picks up the pattern and takes over. If your body is stressed out for whatever reason, the motion will be more difficult to do, and may prove impossible for some.

Who hasn’t looked right when someone asked you to look left? Or been asked to step forward with your left leg, yet you step with your right? Many doctors, including myself, would call this neurological disorganization, and it’s a sign something is taxing the health of the nervous system. Performing a cross-crawl pattern like a foot-hand crawl forward, and especially backward, is not only a great exercise for your muscular and cardiovascular systems, but it’s also a great way to improve the health of your nervous system.

“Muscle imbalances, often due to past and present injuries, are a major reason for gait disturbances.”

Sometimes these patterns just don’t work right, and no matter what coaching cues you receive you can’t get it. Maybe it’s because you’re in pain. Or maybe it’s because your nervous system is too stressed – it’s essentially disorganized – and natural movements are a long forgotten pattern. Often this problem is because of injuries or dietary issues causing muscle imbalances (more on the nutrition aspect in my next article).

Muscle imbalances, often due to past and present injuries, are a major reason for gait disturbances. These muscle imbalances will almost always have some trigger point associated with them, either in the muscle itself, or perhaps distant from that muscle, making it sometimes difficult to figure out a treatment point.

RELATED: You’re Not Getting Stronger Because You Don’t Know How to Move

Trigger points are termed as hyperirritable points in the muscle and fascial matrix that alter nervous system function and can therefore alter gait. They are described as hard nodules, tight bands of fiber, or “knots” in the muscle or fascia.

Where there is a gait disturbance, muscles are (ab)normally working against one another – for example, a hamstring and a quadriceps. But opposite limb joints can be also get of sync – for example, a left hip and a right shoulder. Stretching will not change a muscle that is neurologically facilitated (in spasm) and exercise of any type will not benefit a muscle that is neurologically inhibited (weak) more than temporarily.

“Trying to push through and alter the gait to make it look better when you have muscle imbalances is like painting over rust.”

A trigger point is more often in the inhibited muscle. That’s the one that feels weaker to you. Many want to treat the muscle that feels tight and is perhaps in spasm, so they stretch and do some deep pressure therapy in that muscle. But this often does nothing but perhaps temporarily relieve pain. Mechanical sensory receptors, after all, are larger than pain receptors. So any direct therapy to an area will typically provide some pain relief, even if it’s temporary. 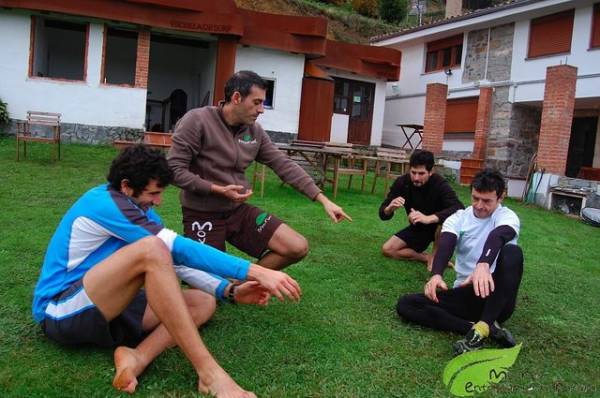 But instead of this, look for the trigger point in the muscle you feel isn’t functioning well or in an area that, when you hold a specific point (the trigger point), you experience more range of motion. For example, if you are having trouble raising your arm over your head and your deltoid is just killing you, press with the fingers of your other hand into various areas of that delt and the surrounding muscles. Find one that helps you raise your arm higher. That’s the treatment point.

“The loss of proper gait often comes from injury patterns, both past and present, poor movement habits developed over time, and overall health. “

Ideally, when you treat a trigger point, you’re pressing on it just hard enough, but not too hard. It’s something you have to get a feel for, and it can sometimes be difficult to do on yourself. You can hold a trigger point, rub it in a circular motion (either direction), or work the trigger point in a back-and-forth direction. One method may provide a better result than another on a case-by-case basis.

Apply pressure or rub out the trigger point for at least ten to thirty seconds. If the pain is improving as you treat the point, then continue until there is no further relief. Sometimes you can actually feel the trigger point disappear beneath your fingers.

Start With the Basics

Trying to push through and alter the gait to make it look better when you have muscle imbalances is like painting over rust. The rust prevails. This is not to say you shouldn’t work on form. It is necessary to some degree. But it is to say your gait is a significant reflection of your overall health and fitness. The wonderful thing about gait is that when it’s all working correctly, performance takes off and you’ll feel better overall. 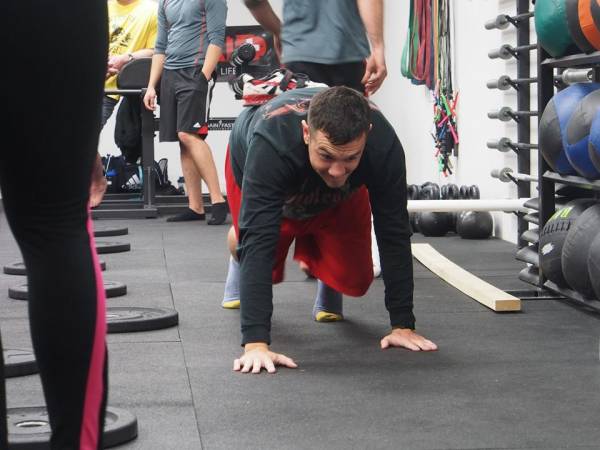 So work on correcting muscle imbalances with the method I described and see how it affects your overall gait. Then practice various gait skills often – not just walking, but crawling, running, swimming, climbing, and pretty much everything that moves your body.

Next time, I’ll discuss how a proper diet and nutrition are essential to proper gait mechanics.

Dr. Steve Gangemi is a chiropractic physician in his seventeenth year of practice in Chapel Hill, North Carolina. He specializes in holistic therapies for patients dealing with a variety of ailments such as hormonal imbalances, digestive disturbances, immune dysfunction, and musculoskeletal problems. His practice focuses on helping his patients move better and live healthier lives. He's barefoot in the office all day long.

Dr. Gangemi conducts Training & Treatment Workshops in the U.S. and Europe focusing on Natural Movement and MovNat principles for athletes seeking to improve performance and heal up injuries. Dr. Gangemi is a frequent contributor for Paleo Magazine, a Level II MovNat Certified Trainer, an amateur beekeeper, and a father of three often-outside and shoeless children.