On the heels of a story I wrote about the Dog Brothers’ annual Gathering of the Pack, I had the opportunity to interview in more depth Guro Marc “Crafty Dog” Denny, who is “the Guiding Force” of the Dog Brothers. What follows is my attempt to capture our conversation, reflecting the individual experience of being a Dog Brother (part one) and the philosophy and priorities of the collective (part two) from Marc’s perspective. Part one is below, and part two will be posted at a later date.

Part One: The Individual Experience

Marc noted in a separate interview with Matt Numrich that he has been involved in upwards of 140 fights at Pack Gatherings. When asked to describe the experience of being in a fight, he noted, “There’s no meditation that will put you in the here-and-now quite like when a stick goes buzzing by your head.” In that moment, he continued, referencing Carl “Mad Dog” Frank, you decide just which self it is you wish to defend.

He also commented that there are different types of logic for different types of fights. In a street situation there will be more explosion and “you go nitrous until (your opponent) is done,” because there is an element of urgency, obviously, related to actual survival. On the other hand, much hierarchical ritual combat, such as might be seen in a venue like the Ultimate Fighting Championships, is about stretching the fight out for the entertainment of a crowd; much more time is involved in trying to impose your result with a greatly increased emphasis on aerobic fitness.

Marc invokes seminal thinkers in his discussion of how the human male operates and why a Dog Brothers experience could fill a primitive need. At our core, humans are animals, he notes, notwithstanding the fact we may be distinct and slightly more complex animals than some. This basic identity means we are governed at least in part by primal urges, including aggression. Austrian Nobel Laureate Konrad Lorenz suggests aggression in nature has three purposes: territory, hierarchy, and reproduction. Normally, because aggression is defined as intra-species, hunting behaviors are excluded from the definition. In the case of humans, Marc would include hunting as a fourth behavior, which in modern society assumes the form of much criminal behavior (e.g,. stealing a wallet is like hunting for food). If the energy for these purposes does not have a proper outlet, it will build up until the subconscious creates a justification for it.

Additionally, Marc cites Carl Jung in observing there is little opportunity nowadays for boys to complete the ritualized journey to manhood that used to be more common and that still takes place in most indigenous cultures. 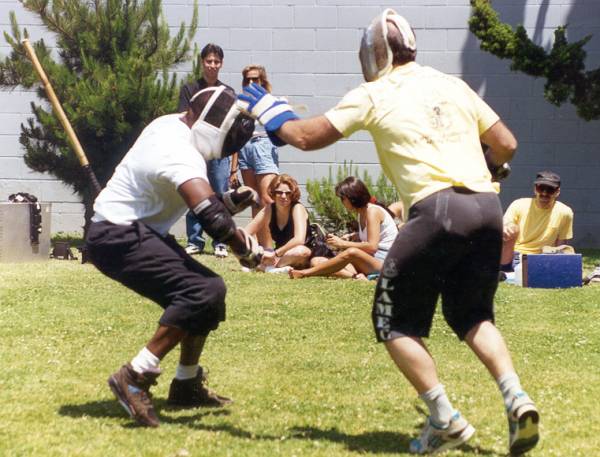 People who gravitate toward the Dog Brothers seem to understand this intuitively, that aggression must be given its proper expression, and that this expression relates closely to the ultimate goal of protection of the tribe. Dog Brothers and participants prepare one another to work together to protect land, women, and children. It’s not about referees, hierarchy, or trophies as much as it is about learning to strike a balance between the primal urge toward aggression and the calm centeredness of the “watcher” inside every human being, Marc says. This is the basis of the Dog Brothers’ credo: “The Greater the Dichotomy, the Profounder the Transformation. Higher Consciousness through Harder Contact” © DB Inc. Individuals must embrace both aspects of their innermost selves: the aspect that does the protecting (influenced by the adrenal response) and the aspect that stops short of damaging a tribe member (the calm centeredness of the watcher).

It is this watcher aspect of the individual, the ability of which to function in the adrenal state is installed by the Dog Brothers Gathering experience, that helps him steer any potentially dicey street situations into a positive direction, if at all possible, Marc notes. What we learn in a state of heightened adrenal response is the most powerful learning we can experience, and it is in this heightened state we can learn how to do what we need to without taking the situation too far, whether it is to defuse the situation with words or take it to a physical place if necessary. In that case, the adrenal learning means we don’t wait for a referee to stop us or control what the watcher controls, because we have learned to access it within ourselves. 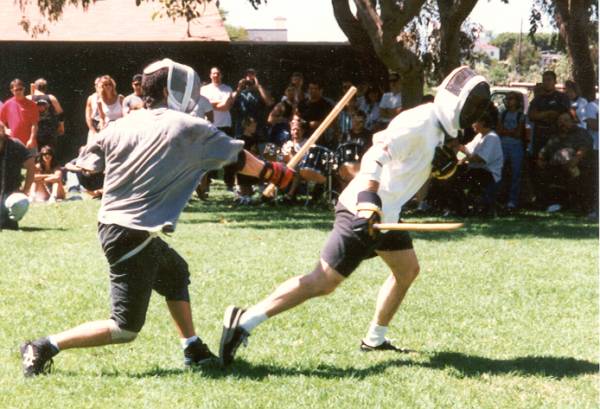 Pack Gatherings and training sessions are generally accompanied by drumming and rhythms. According to Marc, working with rhythm in training enables individual practitioners of different skill levels to work together. It facilitates experimentation, to determine whether certain moves would actually work. In a real fight, you don’t just make a move and wait for the other person to make a move. But if you have two people working in rhythm, you have a sense of whether the moves you make are plausible. You aren’t just reacting; you have your watcher observing what’s going on. You’re not just going hard and fast; you are analyzing what’s working and not. Rhythm also heightens the tribal feel of the movements. Friend of the Pack Brent Lewis, of Earth Tribe Rhythms, generally provides the rhythms at Pack Gatherings, calling to the appropriate archetypes.

The warrior archetype pervades the experience of the individual Dog Brother or friend of the pack, prompting the Dog Brother Martial Arts mission statement of “Walk as a warrior for all your days.” While physical prowess peaks in midlife and then ebbs toward old age, Marc asserts that the individual can continue to protect home and family throughout his life. He cites a book by his instructor Guro Dan Inosanto that described how some men in their 80s dealt with burglars who broke into their homes. He also describes a clipping from the LA Times of a 125lb, 85-year-old man who subdued a 16-year-old intruder until the police arrived, marveling at the magnificence of a man married 60 years who was still able to defend his home. That is an example of a man walking as a warrior for all his days, which motivates Marc in his own training and reflects the mission of the Dog Brothers writ large. 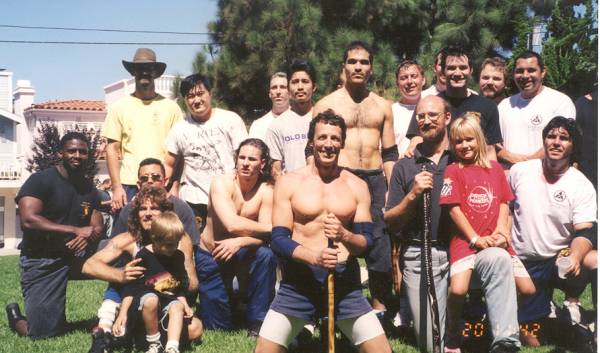 Practically, Marc notes the capacity to walk as a warrior requires the capacity to transcend the ego, which is more consistent with the old man walking this path than the martial artist concerned with hierarchy and winning. It also requires adherence to the three S’s: Avoid stupid people in stupid places doing stupid things. Doing so takes care of 95% of any possible issues and also provides useful information: If doing so does NOT defuse a situation, then the situation is potentially serious. But walking as a warrior for all one’s days enables the individual to tap into the adrenal state if necessary, even at an advanced age.

It also appears this requires a bit of self-deprecation. While Pack members describe themselves as “sweaty, smelly psychopaths with sticks,” Marc notes what they do is merely an attempt to tap into the primal rites of passage described above. Pack members do not put their lives on the line like first responders or members of the military. They are just dogs possessing a glimmer of recollection of the time when they were wolves—and they take the time to celebrate that glimmer.