Introducing Your Kids to Athletic Activity – What to Look For

How do you know when to start your kids in physical activities? And what activity do you choose? And how do you find a good coach? Expert kids coach Jen Flannery shares her advice for parents.

If you are a regular reader of Breaking Muscle, chances are you derive great and frequent benefit from physical activity – sports, weightlifting, martial arts, and the like. If you are a parent, perhaps you have wondered whether your children can derive similar benefits, and if so, how and when to start them in an athletic program. I asked seasoned coach Jen Flannery for some insight into these and other questions related to helping your kids reap the benefits of physical activity.

Jen is a brown belt in Brazilian jiu jitsu and the head women’s and kids instructor at Fifty/50 BJJ. She has been coaching in some form or fashion since she was ten years old, becoming a USA Swimming certified coach in high school, and paying her way through college as a coach. She worked with swim team members who ranged in age from four to eighteen, and the youngest child she has ever coached was a year and a half old. More recently, since 2009, Jen has been a full-time BJJ coach, of both kids and adults, at Fifty/50.

Jen brought her years of experience to bear on her responses to my questions about how to decide appropriate activities for kids, as well as appropriate ages, how parents can support their children in athletic endeavors, and how coaches who work with adults can learn to be better coaches of kids.

What to Look for in a Kids’ Coach

Jen loves kids. She has always had a natural ability to get along with them; she can easily get them to do what she wants without them trying to argue with her. That being said, it is possible to learn how to develop an affinity with kids. Using enthusiasm, big sweeping facial and body expressions, and other similar mannerisms are a good start.

Parents looking for an effective kids’ coach should first ask whether their children like the coach. If they don’t, there will always be a struggle getting the kids to go to class or practice. Jen asks the kids about school and remembers what they do on the weekends and where they go for vacation. She asks them about those things and truly wants to know the answer. She is concerned with their development as people, expecting them to say please and thank you, and the like. At Fifty/50, students who are eligible to test for stripes on their belt must get their teacher’s sign-off, indicating that they are doing well in school. The students are excited about being part of the team and eager to come to class. They are always happy to see Jen, because she is always happy to see them.

The takeaway here is that parents looking for an effective kids’ coach should be looking for someone who honestly wants to be there and isn’t teaching kids just because the job was open or because no one else would do it. Not only do you not want people like this teaching your kids, but the kids will be the first to sense that this is the teacher’s motivation, and they will not want to go to class. 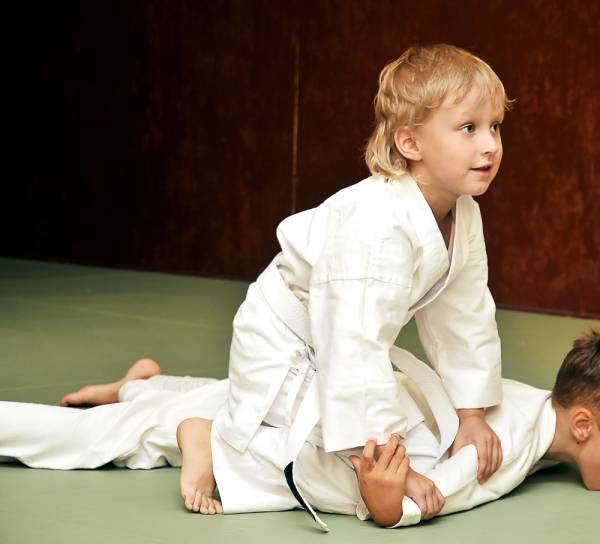 In addition, Jen feels the common practice of putting the lower belt or the less experienced coach in charge of the kids’ class is backwards; it should be the most experienced coaches who are teaching children. These are the coaches who can best break down the essential parts of a technique or movement, whereas lower belts or less experienced instructors might have difficulty executing movements themselves, let alone trying to impart them to others, especially young others.

Jen used to try to coach adults by talking to them the same way she’d talk to a co-worker. It turns out this doesn’t work in sports, especially when working with beginners. In fact, talking to beginners as if they are children works very well, because usually they are scared and don’t want to make a mistake. If you go step by step from the beginning and give them manageable chunks, they are less likely to get stressed out. Since they are involving their bodies as well as their brains, they sometimes cannot make the leap from a rational understanding of what they have to do to effectively get their bodies to do what they know they have to do.

And adults are more sensitive than one might think. While kids are used to heeding authority, adults argue with coaches in their head all the time; they don’t completely believe a coach who tells them what they need to do. It is visible in their faces. Jen has found that people in the stage of their career when they are still climbing the ladder, but before they have achieved the pinnacle, tend to be most challenging to coach. This is so because they have difficulty listening to authority, perhaps because they are trying to assert their own. And then once they achieve that pinnacle, they tend to be easier to coach again.

A common question about enrolling kids in a sports program has to do with what age is appropriate. Jen believes there isn’t really a “too early.” What differs is what you can expect the kids to get out of it. Jen does not believe in sports programs for kids that are glorified babysitters; she expects her kids to learn. But obviously, what and how they learn is going to differ, both in terms of their age and in terms of their upbringing, development, and personal characteristics. 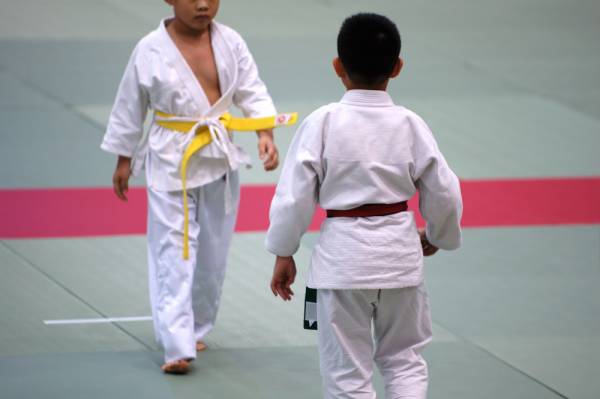 In swimming, Jen believes children should be started at two to three years of age. By nine or ten years old it can be difficult to overcome a fear of the water, if one exists. Martial arts are slightly more difficult because more discipline and more sitting still are required while techniques are being explained. The youngest child at Fifty/50 is almost four years old. Depending on the child, this could be a touch too young, particularly if the child doesn’t have a lot of experience being required to sit and focus. Younger siblings are generally more able to start at an early age because they want to be like their older siblings. So coaches can use this as leverage. “If you want to be with Suzy, you have to sit and be quiet for now while I explain the technique.”

Jen recommends that very young children not be grouped with children who are significantly older. Four-, five- and six-year-olds may effectively be grouped, but children who are older than that will be able to finish exercises more quickly because their bodies are more mature and coordinated. So older children may get bored more easily if they have to wait for slower, less coordinated younger children.

Speaking of which, Jen also works on coordination with her kids. Some kids have to be taught how to move and have to develop certain basic abilities. For example, she has worked with some eight-year-olds who do not know how to engage their quads to jump. She coached field hockey a few years ago, and when she had them do running drills, the kids complained that it was difficult because they weren’t ever required to run. On the whole, Jen finds the current generation of kids is playing outside less and less, which means they learn coordination and agility more slowly. So in her classes, she focuses on calisthenics and strength-building exercises as well as jiu jitsu technique. She fervently believes kids are capable of learning anything; coaches just have to manage each kid differently.

In the second part of my discussion with Jen, she reveals the single best thing parents can do to support their children’s athletic activity and discusses some home truths about kids in sports: How Parents Can Best Support Their Kids in Athletics