Later I learned that Amy, fearful and in pain after a wayward pull-up attempt, made an appointment to see a physical therapist before she even left the parking lot. The following day he prescribed rehabilitation drills for a small muscle tear. “Be careful and it will heal soon,” the therapist advised. One month later, she returned to Practice CrossFit, physically recovered, mentally not so much.

I was proud of her for taking the responsibility required to get fixed, not so proud of the fact that she had ignored my pleas to come in and let me find things for her to do. I understand now. I was the one that hurt her after all. Why would she ever trust me again? The guy who never told her that training is like a coin. One side is result; one is risk. You can’t have one without the other.

When you start CrossFit you will be overwhelmed by a sense of accomplishment. It hangs in the air like the smell of a pretty girl’s hair. You’ll feel like the mayor running for office in Pleasantville – kissing babies, shaking hands, making friends. But eventually you’ll learn you’re not in Pleasantville. You’re in real life, and CrossFit will hurt. Three years ago, I would have hidden that truth. Now, I think CrossFit’s ability to hurt is also its most commendable quality.

How do I know you will hurt? I am a CrossFitter and affiliate owner, and, like a bad ex-girlfriend, CrossFit hurt me. I have a tear in each patellar tendon to prove it. To be fair and as is often the case, I arrived at CrossFit from a life of poor training habits and I decided not to correct them as I dove in. CrossFit showed me my folly through large loads moved quickly. That was my first big CrossFit lesson. Amy was my most profound.

Amy taught me what I should have told her from the beginning. “Welcome to Practice CrossFit. It’s going to hurt.”

Perhaps then Amy’s minor injury wouldn’t have jarred her. Most people that walk into my box, like Amy, have no athletic background. They’ve spent their life sick – eating poorly and rarely exercising – and know discomfort but not pain. And they’ll do anything to avoid pain. Everyone, from our parents to our doctors, has told us pain is bad. 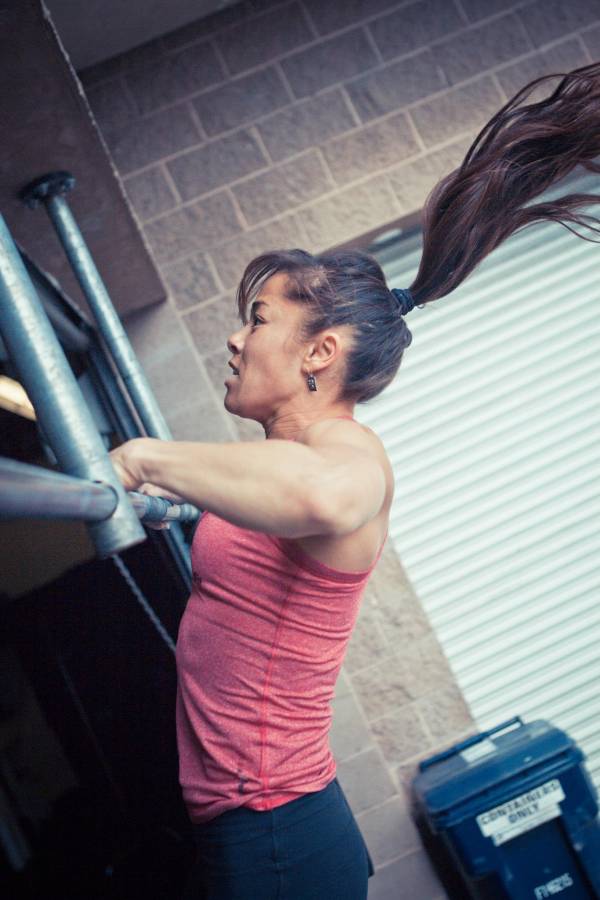 But as I’ve learned, a pain-free life isn’t necessarily a good one. My dad died at 59, fat and alone, and he avoided and medicated his pain away. Because of CrossFit, I’m fit and surrounded by true friends. And each day I endure pain in the WOD, and occasionally get hurt or injured, but I accept it as the price for this life.

To this day, after six years of constantly CrossFitting, I still get butterflies every time I workout. I don’t get them from imminent bliss – I get them from inevitable pain. Pain I choose to endure, risk I choose to take for the tremendous reward to follow. Rewards that look like chiseled abs and massive shoulders on the outside. Inside, my rewards feel like knowing I will become nothing like my father, nothing like those who do their best to avoid all forms of challenging and rewarding pain.

I failed Amy and others like her by not making them aware of the potential CrossFit brings for injury and pain. I did not prepare her for that day of reckoning, when she would be given the choice many of us will face: fight or give up. Either option will hurt. One is brief, now and on your terms. The other is chronic, an unwelcomed surprise that may never go away.

Amy’s month off turned into many months of mental reassurance that I believe could have been eliminated if I would have given her the common knowledge that keeps me moving no matter how much it hurts to do so: It’s CrossFit and not doing it is going to hurt much more than doing it ever will.

Haters try to destroy CrossFit’s reputation by telling stories of people getting injured because they pushed too hard in a WOD or local competition. Let them tell those stories. If there ever was a sales pitch for CrossFit, that’s it. Any exercise program that can motivate people to work that hard – to give their all – is exceptional and worth defending.

Continue by reading the the rebuttal from CrossFit coach Mike Tromello

From an early age Josh Bunch ventured into fitness, eventually finding his way to personal training and nutrition. For years Bunch dabbled in competitive bodybuilding personally, while training athletes such as marathon runners, hockey players, or every day health wannabe's.

Since 2000 Bunch has advanced his nutrional scope and training knowledge to the point to where he realizes, "there is a lot more to learn."

Having found a family and home as the owner of Practice CrossFit, Bunch now reaches out by way of national seminars dedicated to the way he believes will help those in need the most: Paleo + CrossFit.

Bunch is an accomplished writer, professionally writing for the CrossFit Media team as well as having written for several other publications through the years.

Soon Bunch will find himself with his first published book, tentatively titled "There Is No Such Thing as Natural Causes." A tale of nutrition, CrossFit, and higher living, it is a book he feels provides the missing link all food books leave out - people.