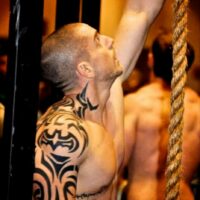 From an early age Josh Bunch ventured into fitness, eventually finding his way to personal training and nutrition. For years Bunch dabbled in competitive bodybuilding personally, while training athletes such as marathon runners, hockey players, or every day health wannabe's.

Since 2000 Bunch has advanced his nutrional scope and training knowledge to the point to where he realizes, "there is a lot more to learn."

Having found a family and home as the owner of Practice CrossFit, Bunch now reaches out by way of national seminars dedicated to the way he believes will help those in need the most: Paleo + CrossFit.

Bunch is an accomplished writer, professionally writing for the CrossFit Media team as well as having written for several other publications through the years.

Soon Bunch will find himself with his first published book, tentatively titled "There Is No Such Thing as Natural Causes." A tale of nutrition, CrossFit, and higher living, it is a book he feels provides the missing link all food books leave out - people.