There was a moment I questioned marrying my husband – when he told me he was wearing a kilt to our wedding. Now, years later, I have fallen in love with the Highland Games and all things Scottish.

I only remember one moment when I really questioned whether or not I wanted to marry my husband. We were sitting in the car talking about weddings, just three months after we first met. I was telling him about the brilliant wedding party color scheme I’d been dreaming of for years. My husband just laughed and shook his head.

“That won’t work if you’re going to marry me,” he said.

“Because it doesn’t match my kilt.”

My heart sunk. I really liked this guy and all, but did I really want to marry a guy in a skirt?!

Two years later I was happily walking down the aisle, accompanied by my daddy and a bagpiper, my kilted groom awaiting me. Then I attended my first Highland Games, and I decided I really liked this Scottish stuff after all. The music, the Highland dance, the single-malt scotch, the haggis, all captured me – but the Highland Games themselves, the heavy athletics, really stood out.

If you’ve never been to a Highland Games, you’ve got to check it out. It may not be as mainstream as other events, but it sure is one-of-a-kind, and the competitors are tough. It’s also a great way to spend a leisurely afternoon while also getting some athletic inspiration. And although you’ll see a good number of kilted men, Highland athletics have become more and more popular with women in recent years. According to a 2007 article in the San Diego Union-Tribune, in Scotland approximately 60-percent of the competitors are men and 40-percent are women.

The Highland Games are thought to have originated in ancient Scotland as a way to find the best warriors in the clan. In medieval Scotland, the games became official and were organized by the king to find the fastest and strongest men in the kingdom. They first came to America in the 1800s and have spread across the country ever since. Now you can find a Highland gathering in almost every state, although some are more prestigious than others. If you’re interested in serious heavy athletics, look for events that have professional athletes. The North American Scottish Games Athletics (NASGA) website has a great database of Highland Games where you can search for upcoming events and see current stats and rankings.

All Scottish Heavy Athletics games must have a minimum of five events. The rules are pretty straightforward, and many of the techniques resemble other more mainstream lifting events pretty closely. In fact, if you train with kettlebells you’ll probably find that Scottish athletics come pretty naturally. Some people even claim kettlebells originated in Scotland. (Of course, like the Irish, the Scots are quick to claim things as their own, so this may or may not be historically accurate.) Then again, some of the events, like the stone put and caber toss, may require a change of perspective, depending on your background.

As noted by Dan John:

It [throwing] is really the opposite of powerlifting. The squat, deadlift and bench press are sometimes simply summarized as “explode out of the hole” or “grip it and rip it.” The Olympic lifts, however, mimic the acceleration of the throwing events. The pull from the floor to the knees is certainly done at maximal speed, yet the athlete must hold the proper positions or all that speed will go to waste. The best lifts for the throws are the clean and press, the snatch, the clean and jerk and all the one-arm variations.

Highland Games are also a great way for amateurs and athletes of all levels to gain competition experience. Although professional classes are invitation-only, anyone can compete at the amateur level. NASGA recommends reserving a spot a few months in advance to ensure you get a slot.

Here are a few of the events you might find at a typical game: 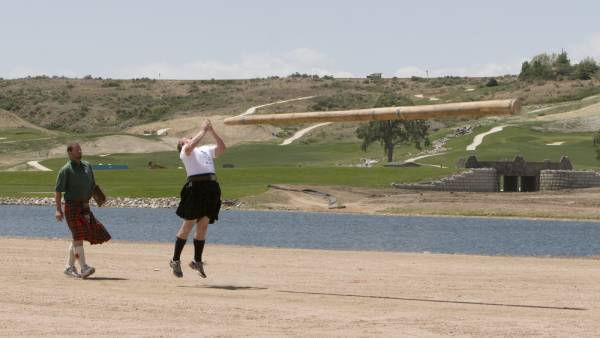 The caber toss may be the most famous event at the Highland Games, and for good reason. This event consists of each player taking turn “tossing” a giant wooden caber. The goal is to turn the caber so when it lands, it ends up as close to the 12 o’clock position as possible. However, turning the caber is itself a challenging feat, and anywhere between 9 o’clock and 3 o’clock is considered to be a valid throw. If the caber doesn’t turn, it is judged based on the angle at which it falls in relation to the judge, who stands behind the player during the toss.

There are two types of stones used in the Highland Games: the open stone and the Braemar stone. Basically, the idea is to throw the stone, which can be anywhere from 16 to 22 pounds for men or 8 to 12 pounds for women, with only one hand. For the Braemar stone put, the feet must remain stationary until the throw is complete. 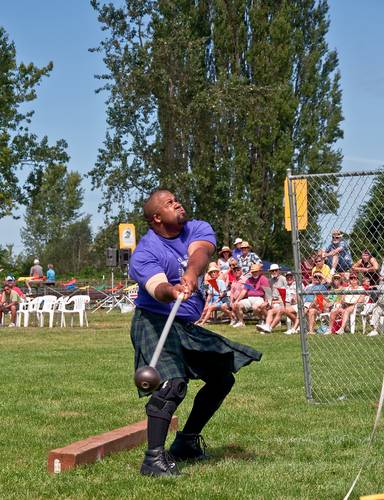 The Scottish hammer throw is the ancient predecessor of the modern hammer throw seen at the Olympics. According to the official NASGA rules, “The hammer head shall be spherical and made of metal, and the shaft shall be of wood, rattan, bamboo, or plastic (PVC pipe is sometimes used for increased durability). Rattan or bamboo is recommended over wood or plastic.” Women throw either a 12 or 16 pound hammer, whereas men throw a 16 or 22 pound hammer. The thrower can only move his or her feet after the hammer has been thrown.

These three events are the staples of most Highland Games, although other events include the weight toss for height and distance, as well as the sheaf toss in some areas of the country. Spring and summer are great times for Highland Games, whether you want to watch or participate.

Just remember, if you want to compete, you do have to wear a kilt!