It’s the Art: How an in-the-Moment Decision Continues to Pay Dividends

Once I tapped out a man I was training with and he threw an actual tantrum. What I said to him next impacted his life and mine for many years to come.

Several years ago, I was training with a man who had significantly less jiu jitsu experience than I. Indeed, at that time I had probably more than twice as many years under my belt (no pun intended) as he had months. So it wasn’t a surprise to me when he made an error that I capitalized on to apply a submission. He struggled and tried to escape, and then he eventually tapped. Immediately after I let go, he got to his knees and pounded his fist on the mat, yelling expletives and basically throwing a tantrum. The only thing missing from this infantile tableau was a diaper.

I was so shocked I didn’t even think to be angry or insulted at first. Instead, I pulled him aside to try to help him calm down. When I asked why he was flipping out, he responded in a predictable way: “Because I had to tap to you, and you’re a woman.” Yes, he was so upset he didn’t even consider that he was acting like a real jackass. But rather than yell at him, I remember deciding in the moment to try a different tack. After I got him to take some deep breaths, I said to him, “Over and above the fact that you’ve just insulted me, you realize you’ve just insulted jiu jitsu, right?”

He sat up and paid attention to this. “What do you mean?” I explained to him that his actions suggested he believed he could “put one over” on jiu jitsu, that he could pick and choose when the principles applied to him because he was just that awesome. I told him that what bested him when he and I were training was not me being so rad, but the fact that my selection and application of appropriate jiu jitsu techniques happened to be more effective than his.

“I didn’t beat you because I’m a badass. It’s the art. What happened just now just means the art works.” I reminded him of how long we had been training relative to each other, and then I asked him, “What are you here to learn? Jiu jitsu, right? So you must think there’s something to it. Otherwise why would you bother? But you can’t have it both ways. You can’t value the art enough to spend hours learning how to apply it but then get mad when it’s effective at your expense.”

His brain didn’t actually explode upon hearing this, but I think there was definitely some smoke. He immediately bowed his head and apologized to me. And I could tell he also felt bad about his outburst, about what it revealed about him in that moment. As I mentioned, the issue wasn’t about me, not really, which was important for both of us to realize. Rather, it was about this guy’s inability to own this aspect of his training in that moment.

In retrospect, I realized by framing the issue in this manner, I had given this student a way to square the realities of what it takes to learn BJJ with the requirements of his ego. I had provided a cognitive loophole. Yes, I was the one who beat him, but I just happened to the agent of jiu jitsu at that moment. That didn’t need to be the focus for either of us. 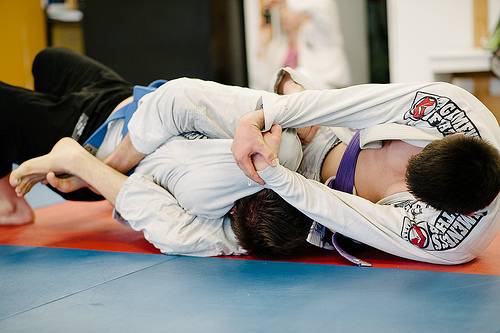 n subsequent months, this guy became a positive force for his fellow students and a cheerleader for me. Many times I overheard him advising newer, perhaps frustrated, people that “it’s the art,” which, of course, made me smile. He even seemed to get to the point where he liked getting tapped, taking it as a point of pride that the art he loved so much was working. In other words, he seemed to reorient himself toward embracing a more effective process for learning BJJ, even the parts of that process his ego traditionally didn’t like.

So why am I mentioning this? Well, for me, there were several takeaways from this story, takeaways that revealed themselves over time. In other words, this one decision has provided food for thought and positive reverberations for the many years since the event occurred.

First, my in-the-moment decision to treat this student as someone in need of support and education rather than indulging in my own desire to give him a browbeating resulted in something positive. Equipped with some perspective, this guy surprised me with his commitment to doing what it takes to become a better grappler, and that included improving his attitude. This guy just happened to be naïve and frustrated, not inherently douchey or egotistical. He became one of my biggest supporters because I took the time to help him learn something rather than denigrate him for not knowing that something already. Of course, if he hadn’t responded so positively (because not everyone will), I might have brought out my inner bitch (my mom honestly loves that’s what I nicknamed my sense of self-righteousness.) But I learned we can’t ever predict who will benefit from a teachable moment or in what way, so it’s always worthwhile to try that first. If it doesn’t go the way we hope or intend, at least we know we tried.

Second, this idea of focusing on what the art of jiu jitsu enables us to do rather than who is doing it to us helps me with my own training. I may feel my capabilities relative to some components of the art are pretty effective. But I will only ever know a fraction of what there is to learn, and if I’m going to continue to develop, I have to take risks. However, if I can think about these risks in more dispassionate terms rather than as being pitted against a particular person, then it becomes more abstract and less an indicator of an innate shortcoming on my part. (Of course, all bets are off when it comes to competition and competition-style training. I’m talking about effective ways to expand our repertoire, which is something everyone, at all belt levels, can benefit from and must spend time doing in order to improve.) 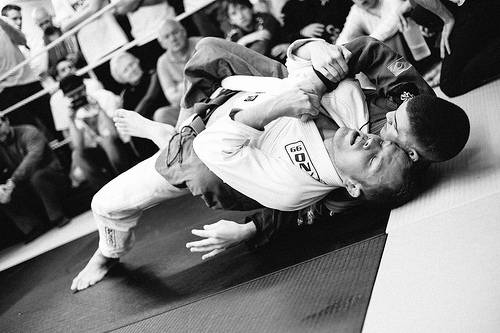 My coach and friend Seph Smith has an interesting perspective. He said when he’s training for his own development, he closes his eyes, and his partner in some real way ceases to exist, except insofar as that person is giving him reactions he can use to test his own execution of jiu jitsu. For him, it becomes an experimentation session, where the “winning” and “losing” falls away and the concepts of “more and less effective” take over. He is testing his application of the art, looking for optimal strategies, and his partner becomes the testing ground.

Third, framing in this way the discussion of winning and losing may help people who are doing more “losing” than “winning” (at least in their own mind) embrace the losses and build on them. As a corollary of this, it speaks to the comments I made in an earlier article about helping men and women talk to each other rather than past each other. I’m not a man, but if I were, I suspect I wouldn’t be open to constructive criticism if I were first described as acting sexist – even if it was an accurate characterization in the moment. (Maybe especially if it was an accurate characterization.) As a woman, if I want a man to understand where I am coming from, I have a hunch that leading with the S card is unlikely to be the most effective strategy.

So, perhaps framing a training session where a woman prevails over a man as an example of the effectiveness of the art could help men understand that it’s all part of the process. Indeed, anyone who wants to take a shortcut to expertise might benefit from this kind of orientation. Sure, this may not be as satisfying as calling someone a sexist pig, but 1) whose problem is that? (Hint: mine) and 2) if our intentions are sincere that we want to help others learn, the ones who are going to hear this at all in the first place will eventually figure out on their own that their egos are getting in the way, as my originally cranky training partner demonstrates. And who knows? That person you thought was a die-hard sexist/douche/hopeless case might be the one who becomes your most ardent fan and the loudest mouthpiece for good.

Have you ever made an in-the-moment decision on the mat or elsewhere that had unexpected reverberations? What did you learn, positive or negative, that has had lasting effects on your behavior or beliefs? Post your experiences to comments.