Katy Bowman and the Biomechanics of Human Growth: The Necessity of Monkey Business

During childhood, monkey bars are often blamed for playground injuries.

During childhood, monkey bars are often blamed for playground injuries. In fact, monkey bars and climbing structures in playgrounds have been a source of controversy since 1912, when the city of New York banned them in area playgrounds. As juicy a topic as it may be, I’m not here to discuss playground politics. What strikes me as interesting about this trend is the same thing that intrigues me about putting kids in ‘supportive’ shoes and minimizing barefoot time. Are hanging and climbing becoming extinct movements, in the same way that letting kids go barefoot has become a parenting no-no in certain circles? And do these missing movements have any impact on development during childhood and beyond?

I brought this question to Katy Bowman, a biomechanics expert specializing on natural human movement and development. In addition to her textbook smarts, she also has two little ones under two who have hanging skills that would impress any monkey:

Katy encourages parents to get kids started with these movements that prime upper body strength from a young age (whether they go commando is up to you). “Babies have the reflexes to become strong very quickly. But it is up to us as the guiders of the wee ones, to cultivate what nature has presented – just like every other animal.” So what’s the big deal about this particular movement? What do hanging and swinging do for upper body strength, not to mention the rest of the body? According to Katy, they do a lot more than we might think:

Hanging and the much more challenging action of swinging from object to object, use upper body strength in a general sense. Swinging requires the full participation of every bit of tissue from the fingers to the lower body. The largest contributing muscle force-wise, is the latissimus, which connects the arm bone to the pelvis. When we work our lats as adults, we’re used to fixing the pelvis and pulling the arms toward the ground. This way of training creates an entirely different load (and motor program) than when you pull the pelvis toward the arm as you do during brachiation. The resulting tone of a muscle regularly used in this whole-body fashion can aid in shoulder and sacral stabilization, which in turn are essential for the mechanics of breathing and pelvic floor function. We don’t typically associate ‘monkeying around’ with lung inflation and bladder support, but mechanically speaking they are directly linked. 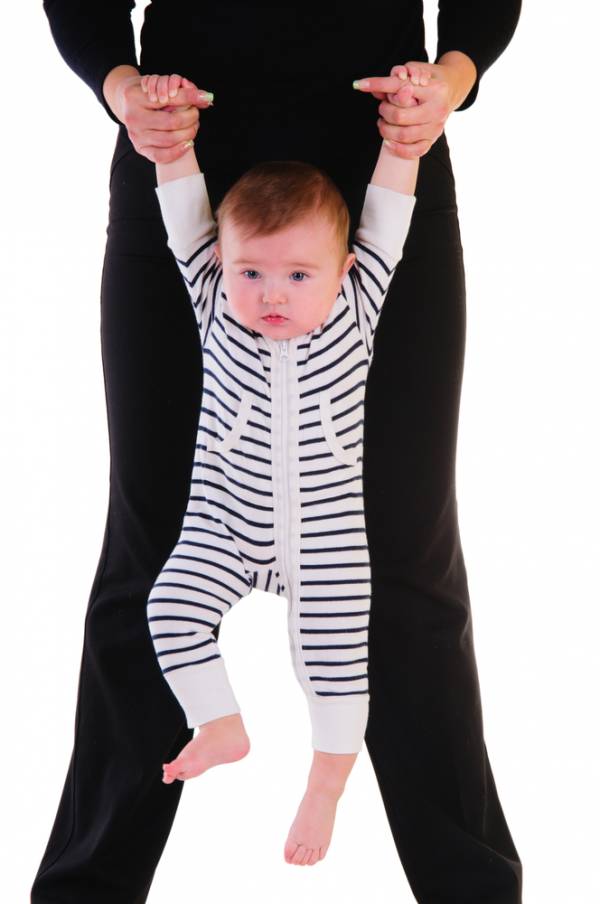 As a parent, this is fascinating stuff, but what’s even more amazing is that the strength required for swinging all starts way before kids find their way to the monkey bars. If you’ve ever held a newborn you’ve probably experienced that primordial response known as the grasping reflex. In addition to the stepping reflex (more on that here) reflexive gripping is one of the infant reflexes that drives human development. As Katy notes, “For the last hundred years, infant reflexes have been presented as vestigial; artifacts of our ancestral past. Many a scholar has written a paper on how these relics disappeared after a few months because they are unnecessary. Real development comes later, according to these papers, after the modern brain (implied as superior to our ancestral counterpart) was ready to be developed.” Which begs the question: Are infantile reflexes simply the leftover residue from our inferior ancestors, or are they something to be cultivated?

Katy says research shows strong evidence for the latter. “Early cultivation of these reflexes is essential to the health, strength and survival of children – even today. With skyrocketing bouts of children’s asthma and allergies, low muscular tone, abdominal herniations, diastasis recti, and just general malaise, a child’s development requires much greater attention than we are currently giving it.” In fact, when we look at the example of Katy’s kids (fourteen-month old Finn, in the video) it’s easy to call him a super baby, and move on. But what appears as super-strength is really quite average when you look at data collected from modern Hunter-Gathering populations. Did I mention Katy knows a lot about that too?

Data shows that modern H-G tribes like the !X un and Ju/‘hoan work specific exercises, multiple times a day, with their children in the first few months of their life. These children walk much more quickly (seven to nine months) and can hold their entire body early on. A deeper literature review reveals earlier research into the gripping reflex (1930s) and their conclusions that it was indeed a lack of practice early on that reduced the appearance of the reflex. They raised the question ‘What result would the practice of this function have on its retention?’ They found with cultivation, four-day old babies could hold their weight for a periods of time ranging from seconds to a full minute.

In my experience as a personal trainer, these are stats that put many adults to shame! 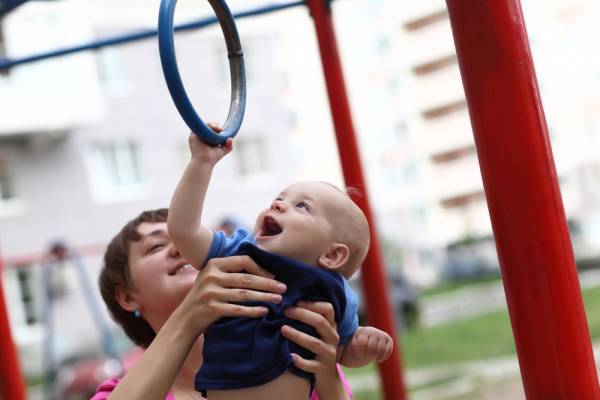 The next question is, “How safe is this?” Katy’s answer: it depends on the child’s mass and previous habits:. “A two- or three-year-old who’s never hung from his own arms doesn’t have the muscle to support his body weight,” says Bowman. “This load is then transferred this to the ligaments, which are not designed to withstand it, and can cause dislocation. This is where injuries like nursemaid’s elbow come from. When you progress appropriately – that is low and gentle tensile loads applied multiple times throughout a day for a few seconds each time – and you do it as they grow from eight to thirty pounds, watch out! Your kids will quickly become little circus performers.”

So if you’re a new parent sitting and staring at your infant in her swing, bummed that you missed your window to be able to ‘do’ something with her, there’s good news. There is a lot you can do with that baby to cultivate her reflexes and develop healthy movement habits, even now.

Start at the beginning, by loading your wee one the same way you would have if they were a newborn. Here is a video of a much younger baby Finn (wearing a diaper this time) cultivating his strength-to-weight ratio and pulling his own weight at just three months old. (No wonder he’s so good at those rings!):

These tips from Katy are a must-read before you get started:

1. Start cultivating the grasping reflex as early as you can. “Place a finger in their palms, letting them hold you. Then gently and slowly, begin pulling your hand away, giving them a chance to engage their muscles. Never yank, and, at a certain point, hold your position still and let them do some isometric work. They’ll stop when they are tired.”

2. Let baby pull up- don’t yank on your baby. “There’s a difference between you pulling on your kid and your kid pulling against something fixed. When you pull up on a child, you generate the load, which isn’t good because you have no idea of your force generation and how it relates to their current abilities.”

3. Pay attention to your baby’s signals. “You don’t know how fatigued they are – only they do. ‘Sessions’ with my kids (and in H-G tribes) are done just after a feeding and lasted maybe a few minutes tops. Teaching a few baby signs like ‘More’ and ‘All Done’ also help a ton with communication. You don’t want to be into it more than they are.”

4. Take it slow with latecomers: “For latecomers (kids who are already heavier than their muscles can adapt to quickly), start by ‘hanging,’ keeping the feet on the ground. Smaller progressions are more sound when it comes to injury prevention and optimizing your program. That goes for the adults too!”

Stay tuned for the final installment of this series: what Katy has to say about slings, cribs, car seats, and carrying your baby. If you missed it, make sure to read the first part of the series: Barefoot Babies.

As you can probably tell, Katy could write a book about this stuff- in fact, she is! Look for Katy’s book on natural human movement and how to find your reflex-driven body (or how to fix it if you missed out!), to be released in Spring 2014. Follow her Facebook at Alignedandwell for updates.