Lactic Acid: The Key to Metabolism

Once thought to be a waste product of anaerobic metabolism, lactate is now known to form continuously under aerobic conditions, the key to what is happening with metabolism.

Let’s take a little lactate acid 101 detour first: when your body is working out, it prefers to get its energy from aerobic activity, meaning using oxygen. But there are cases when the activity level is kind of intense, like a heavy lifting session, and your body doesn’t get enough oxygen so it switches to anaerobically generating energy. Through a process called glycolysis, muscle glycogen is metabolized into something called pyruvate. If the oxygen supply is there, pyruvate can be broken down for energy through aerobic channels. When the body lacks sufficient oxygen pyruvate goes through an anaerobic process to create more energy. The pyruvate is broken down into lactate, which enables glycolysis to continue.

Your body can for a few minutes produce a energy this way before lactate levels in the muscles increase resulting in acidity in the muscle cells. The use of lactate as fuel within the muscle itself varies with how well a person’s endurance muscle fibers are trained aerobically. Lactate can also be sent to the brain and heart for fuel, or to the liver to be converted to glucose, or move to active and inactive muscles and used as energy.

We know the value of lactic acid today, but it is still misunderstood, and in the past, it was even viewed as a muscle poison. We have George Brooks, a professor of integrative biology at the University of California, Berkeley, for helping to change our understanding of lactate. When Brooks first began investigating lactic acid sports physiologists saw it as a muscle poison that lowered performance. His research over decades has reversed that picture, showing that it is the body’s way of revving up for exercise or to fight disease. Clinicians are now planning clinical trials to use lactate to treat traumatic brain injury and a host of illnesses, including heart attacks, inflammation and swelling.

Starting in the 1970s, Brooks, his students, postdoctoral fellows and staff were the first to show that lactate wasn’t waste. It was a fuel produced by muscle cells all the time and often the preferred source of energy in the body: The brain and heart both run more efficiently and more strongly when fueled by lactate than by glucose, another fuel that circulates through the blood.

“It’s a historic mistake,” Brooks said. “It was thought that lactate is made in muscles when there is not enough oxygen. It has been thought to be a fatigue agent, a metabolic waste product, a metabolic poison. But the classic mistake was to note that when a cell was under stress, there was a lot of lactate, then blame it on lactate. The proper interpretation is that lactate production is a strain response, it’s there to compensate for metabolic stress. It is the way cells push back on deficits in metabolism.”

Gradually, physiologists, nutritionists, clinicians and sports medicine practitioners are beginning to realize that high lactate levels seen in the blood during illness or after injury, such as severe head trauma, are not a problem to get rid of, but, in contrast, a key part of the body’s repair process that needs to be bolstered.

“After injury, adrenaline will activate the sympathetic nervous system and that will give rise to lactate production,” Brooks said. “It is like gassing up the car before a race.”

Without this added fuel, the body wouldn’t have enough energy to repair itself, and Brooks says that studies suggest that lactate supplementation during illness or after injury could speed recovery. Over the course of decades of research, Brooks has discovered that there are at least three main uses of lactate in the body: It’s a major fuel source, it’s the major material to support blood sugar level and it’s a powerful signal for metabolic adaptation to stress. In a recent article in the journal Cell Metabolism1, Brooks reviews the history of lactic acid.

“The reason I wrote the review is that people in all these different disciplines are seeing different effects of lactate, and I am pulling it all together,” said Brooks. “Lactate formulations have been used for decades to fuel athletes during prolonged exertions; it’s been used widely for resuscitation after injury and to treat acidosis. Now, in clinical experiments and trials, lactate is being used to help control blood sugar after injury, to fuel the brain after brain injury, to treat inflammation and swelling, for resuscitation in pancreatitis, hepatitis and dengue infection, to fuel the heart after myocardial infarction and to manage sepsis.”

Brooks’s research has already benefitted endurance athletes. In 1989, he worked with a sports firm to create an energy drink called Cytomax that includes a lactate polymer that can give athletes an energy boost before and during competition. A combination of lactate, glucose, and fructose, it takes advantage of the different ways the body uses fuel: lactate can get into the blood twice as fast as glucose – peaking in just 15 compared to 30 minutes after drinking. Most sports drinks contain only glucose and fructose.

We all store energy in several forms: as glycogen, made from carbohydrates in the diet and stored in the muscles; and as fatty acids, in the form of triglycerides, stored in adipose tissue. When energy is needed, the body breaks down glycogen into lactate and glucose and adipose fat into fatty acids, all of which are distributed throughout the body through the bloodstream as general fuel. However, Brooks said, he and his lab colleagues have shown that lactate is the major fuel source.

Glucose and glycogen are metabolized through a complex series of steps that culminate in lactate. For almost a century, scientists and clinicians believed that lactate is only made when cells lack oxygen. However, using isotope tracers, first in lab animals and then in people, Brooks found that we make and use lactate all the time. 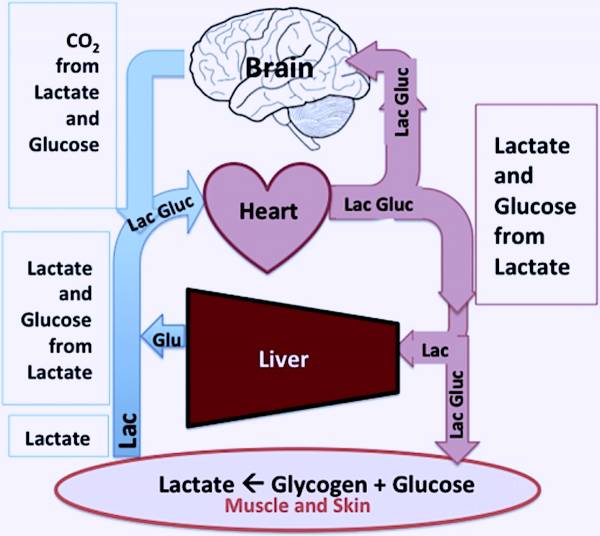 This is what he calls the lactate shuttle, where “producer” cells make lactate and the lactate is used by “consumer” cells. In muscle tissue, for example, the white, or “fast twitch,” muscle cells convert glycogen and glucose into lactate and excrete it as fuel for neighboring red, or “slow twitch,” muscle cells, where lactate is burned in the mitochondrial reticulum to produce the energy molecule ATP that powers muscle fibers. Brooks was the first to show that the mitochondria are an interconnected network of tubes – a reticulum – like a plumbing system that reaches throughout the cell cytoplasm.

The lactate shuttle is also at work as working muscles release lactate that then fuels the beating heart and improves executive function in the brain.

In discovering the lactate shuttle and mitochondrial reticulum, Brooks and his UC Berkeley colleagues have revolutionized thinking about metabolic regulation in the body; not just in the body under stress, but all the time.

For decades scientists and clinicians believed that in cells, glycogen and glucose are degraded to the lactate precursor substance called pyruvate. That turned out to be wrong, since pyruvate is always converted to lactate, and in most cells lactate rapidly enters the mitochondrial reticulum and is burned. Working with lactate tracers, isolated mitochondria, cells, tissues and intact organisms, including humans, Brooks and UC colleagues discovered what had been missed and, consequently, misinterpreted. More recently, others have used magnetic resonance spectroscopy (MRS) to confirm that lactate is continuously formed in muscles and other tissues under fully aerobic (oxygenated) conditions.

Brooks notes that lactate can be a problem if not used. Conditioning in sports is all about getting the body to produce a larger mitochondrial reticulum in cells to use the lactate and thus perform better.

Tellingly, when lactate is around, as, during intense activity, the muscle mitochondria burn it preferentially and even shut out glucose and fatty acid fuels. Brooks used tracers to show that both the heart muscle and the brain prefer lactate to glucose as fuel, and run more strongly on lactate. Lactate also signals fat tissue to stop breaking down fat for fuel.

“One of the important things about lactate is that it gets into the circulation and participates in inter-organ communication,” said Jen-Chywan “Wally” Wang, a UC Berkeley professor of nutritional sciences and toxicology. “Which is why it’s very important in normal metabolism and an integral part of whole-body homeostasis.”

Lactate is the Body’s VISA

In his review, Brooks emphasizes three major roles for lactate in the body: It’s a major source of energy; a precursor for making more glucose in the liver, which helps support blood sugar; and a signaling molecule, circulating in the body and blood and communicating with different tissues, such as adipose tissue, and affecting the expression of genes responsible for managing stress.

For example, studies have shown that lactate increases the production of Brain-Derived Neurotropic Factor (BDNF), which in turn, supports neuron production in the brain. And, as a fuel source, lactate immediately improves the brain’s executive function, whether lactate is infused or comes from exercise.

“It’s like the VISA of energetics; lactate is accepted by consumer cells everywhere it goes,” he said.

The fact that lactate is an all-purpose fuel makes it a problem in cancer, however, and some scientists are looking for ways to block the lactate shuttles in cancer cells to cut off their energy supplies.

All this presages a turnaround in the appreciation of lactate, though Brooks admits that textbooks – except for his own, Exercise Physiology: Human Bioenergetics and Its Applications, now in its fourth edition – still portray lactate as a bad actor.

“Lactate is the key to what is happening with metabolism,” Brooks said. “That is the revolution.”