In my experience, my relationship with Brazilian Jiu-Jitsu has had many of the trappings of a marriage. What’s your relationship like? Extended honeymoon or separate bedrooms? 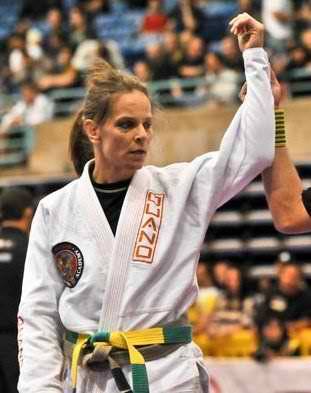 Sometimes it’s hard for grapplers to explain their relationships with Brazilian jiu-jitsu to people who don’t train. All the “civilians” see is their friend or loved one disappearing for hours at a time and returning, sweaty and sometimes banged up, spouting terms that sound like English but don’t compute. Even if they come to watch a grappling class, they don’t necessarily see the allure.

It’s not visible to everyone; perhaps it’s futile to try to make people see what they cannot. But on the other hand, perhaps it is useful to provide an accessible analogy. And in the many years I’ve been training BJJ, one of the better ones I have come across is the notion of the relationship with BJJ as similar to a long-term relationship. (This actually has legs – how many times have you said or thought to yourself about a friend’s significant other, “I just don’t know what s/he sees in him/her?” But as a dutiful friend, you are supportive unless and until “s/he” and “him/her” break up. And if they make it official, you buy them a toaster. Or in this case, a gi.)

When I first met jiu-jitsu, I developed a huge crush almost immediately. It was like nothing I had ever known before, and I thought about it all the time. I counted down the hours and minutes until I could be with it and lost all track of time when we were together. I was probably like the puppy falling all over the older dog, trying to get it to play with me. I stopped short of writing “Valerie Jiu-Jitsu,” “Mrs. Valerie Jiu-Jitsu,” “Mr. and Mrs. Brazilian Jiu-Jitsu” in my spiral-bound notebook, with hearts and flowers to dot the “Is”, but not by much. 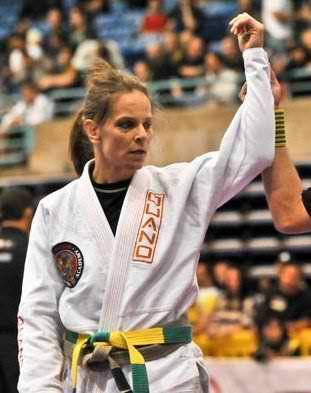 Over time, I fell into a good routine with BJJ. I knew I was going to see it all the time; we didn’t have to plan and I never had any doubts that it would be there for me. I was choosing it over other hobbies (I kindly told Spanish class and book club I was going to try to build something exclusive – and that it wasn’t them, it was me), and I liked it just fine that way. We were a solid couple, and I fit in other things around my time with it. I was really working on developing a solid, stable relationship. I felt fulfilled.

But of course, the initial crazy chemistry burned off eventually, as it always does, and as it has to, if something sustainable is going to persist. But as also happens when things regulate a little bit, after even more time passed I started to see some warts. I realized BJJ didn’t always make me happy and in fact sometimes was downright exasperating. It did the equivalent of things like leaving the top off the toothpaste and saying “Uh-huh” when it wasn’t really paying attention and couldn’t be bothered to stop texting. And sometimes it would hurt me even more than that, make me feel inadequate or insecure. Thoughts began to creep into my head like, “Why can’t you just be more like volleyball sometimes?” Or “You know, shuffleboard doesn’t treat me this way.” I even found myself stopping to eyeball the tennis rackets at sporting goods stores…that weren’t on the way home.

Eventually, BJJ and I underwent a trial separation for close to 12 months, after I had been training for several years. I had become burned out and just unhappy, like I wasn’t getting what I needed. But I loved it enough to never want to resent it. So I basically moved out. Instead of training, I went on walks. Was free on weeknights to go to happy hours and on dates. Reduced my cauliflower ear. Stayed up late on Fridays because I wasn’t getting up on Saturdays for training. And it was lovely.

Lovely but weird. And eventually wrong. Ultimately, the deep connection I felt with grappling prevailed, and we started talking again. After close to a year of sowing some different oats, I realized I wanted to find myself back with BJJ. So I resumed training, feeling my way and making sure not to fall prey to the more frenzied behaviors I had engaged in in the past. I wanted things to be steadier, more mature. 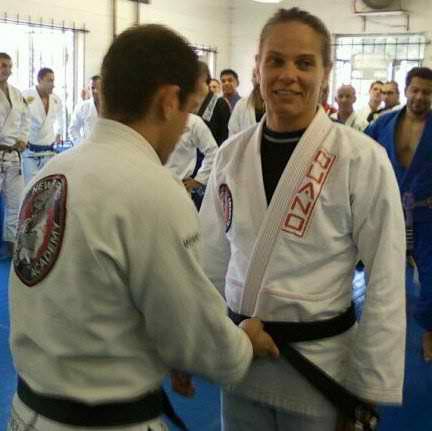 And now, lo these many years later, my relationship with BJJ is pretty much cemented. We have a groove going, we keep things interesting, we finish each other’s sentences. The passion is still there, but it is tempered by a deeper, more abiding connection. If I don’t train for a day or even for a few days, I miss it, but I’m okay with the other things going on. The original giddiness resurfaces sometimes, enough to remind me that I’m in the right avocation, but even when it doesn’t, the contentment and security I feel in my relationship with jiu jitsu is always present.

Maybe this description doesn’t explain WHY I love Brazilian jiu jitsu so much. But maybe it does provide a bit of insight into HOW the relationship has developed and deepened over time. And maybe it does so in language the civilian might be able to understand.

Right dear? (Picture me turning to BJJ, who is sitting on the couch next to me. Texting, of course.)