At a time when women are representing countries never before represented by females in the Olympics, Pakistani-American Kulsoom Abdullah is doing her part to forward the cause of Muslim women in sports. Kulsoom Abdullah is like many readers of Breaking Muscle in that she is a weightlifting enthusiast and sometime CrossFitter. She is perhaps different from some readers in that she is also Muslim and wears a traditional head scarf, or hijab, as part of her religious expression. When I had the opportunity to interview Kulsoom, however, I discovered the differences are not all that pronounced. In fact, Kulsoom’s experiences “lifting covered,” which is also the name of her website, reflect the experiences many of us have as athletes and thoughtful people, Muslim or otherwise. Ironically, it is the very clothing of her religion that is now becoming the center of conflict in her life as an athlete in the United States.

A dual citizen of Pakistan and the U.S., Kulsoom first began receiving media attention because she wanted to compete at a USA National weightlifting competition wearing more than the regulation singlet. Her expression of her religious beliefs includes the preference to cover her arms. However, weightlifting officials indicated this would be problematic, because if her arms were covered it would be difficult for judges to determine whether she is correctly locked out on a lift. Thus, she was initially told she would be unable to participate. 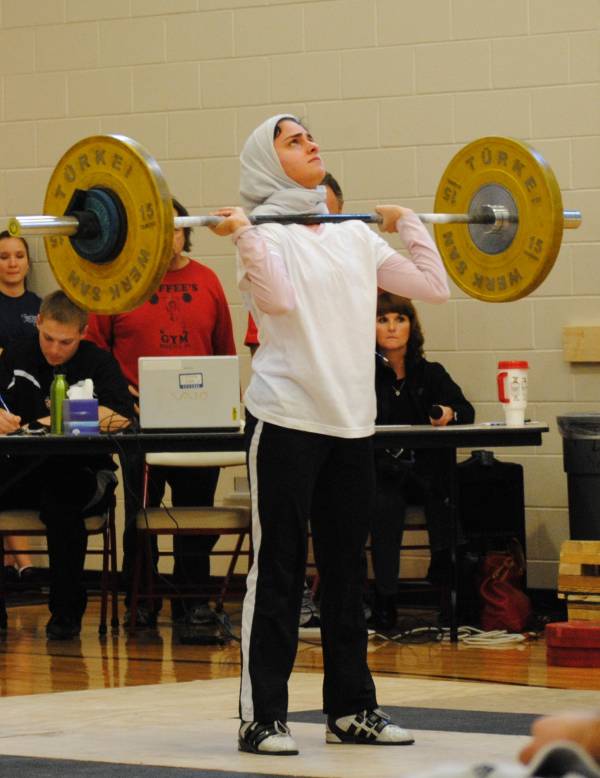 Undeterred, Kulsoom started her website, Lifting Covered, in 2010 to try to obtain some leeway for the clothing issue. The story about her denial had already gone international, with USA Weightlifting maintaining that it was following international weightlifting rules. A press release followed, which Kulsoom posted on Lifting Covered, and she used the website as a way to introduce herself, explain her story, and document her experience.

Like many of us, Kulsoom had wanted to be athletic as a child, but where she grew up in Florida she did not have any access to resources. Later, she moved to Atlanta to work on a doctorate in computer engineering at Georgia Tech, and upon her arrival, she tried taekwondo at the suggestion of an acquaintance. She felt comfortable wearing the uniform, which covered her in a manner consistent with her beliefs, and the instructor had no problem with her wearing a head scarf.

Due to her newfound confidence and enjoyment in learning a skill and getting exercise, Kulsoom decided she wanted to supplement her martial arts practice with weightlifting. She found stumptuous.com, which is maintained by one of our friends here at Breaking Muscle, Krista Scott-Dixon, and which provided Kulsoom with information about weightlifting, giving her the opportunity to work on more functional movements. 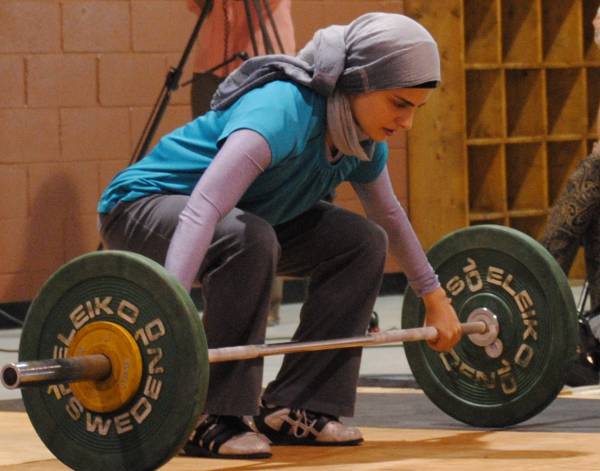 Kulsoom started out with powerlifting (e.g., deadlift, bench press) and eventually got into the Olympic lifts (clean and jerk, snatch) through the CrossFit gym she joined in 2007. Her coaches encouraged her to consider competing, and after some reluctance, she took up the standard in the beginning of 2010. Her participation in this local weightlifting tournament, at which she had quite a bit of fun, helped her overcome a deep-seated belief that she is not strong or competitive. It turns out she is both. And interestingly, her clothing choices were not an issue at this tournament.

Kulsoom’s clothing did not become the issue she describes on her website until she qualified for the USA National competition. Some coaches remarked that wearing the singlet shouldn’t be a big deal for her, and at first USA Weightlifting declined to make any compromises. Kulsoom pursued a course of action to try to gain permission to compete. She spent the first half of 2011 consulting legal advice and civil rights groups, the press release was posted in June of 2011, and she also wrote a letter to USAW, to no avail, asking if there was a way for her to stay covered but also demonstrate proper technique.

Things started coming together when she wrote a presentation explaining some ideas about how a compromise could be reached – clothing she had worn and could wear in the future that would accomplish the same goal – and brought it to the International Weightlifting Federation technical meeting in 2011. 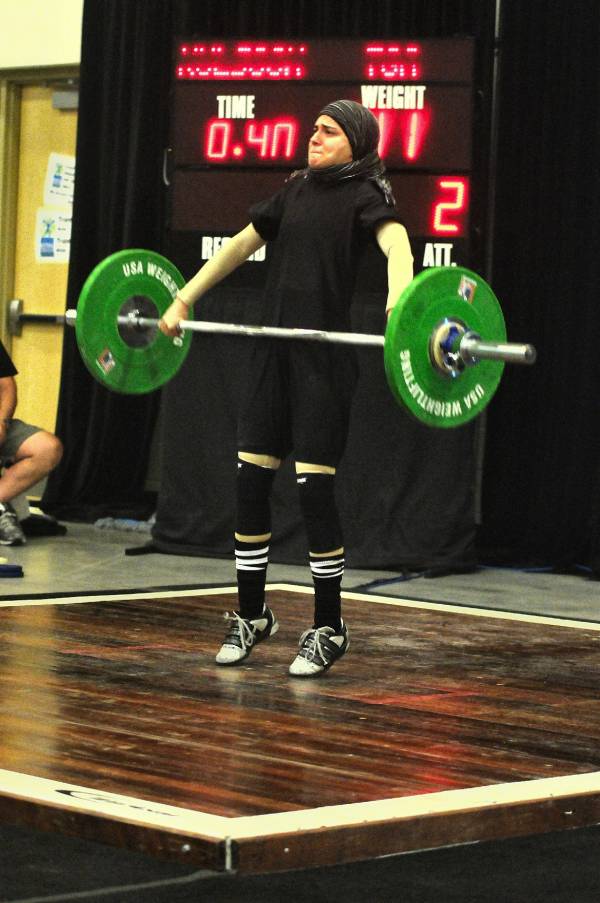 Ultimately, the IWF consented to a clothing modification in the form of a singlet over a unitard so the wearer’s arms and legs would be covered but so that lockout would also be visible. Fortunately, the IWF sets the standard for all of the more regional bodies, which means that once they gave the okay, Kulsoom had the okay to participate in the USA National Weightlifting competition. Not so fortunately, that only gave her two weeks to prepare.

Additionally, since Kulsoom was the first woman to ever compete covered, there was quite a bit of press coverage at that event. She competed in the world championship in France in November 2011, representing Pakistan, and then on to Korea in April 2012. Around that time, Kulsoom discovered there was a chance she could go to the Olympics in London with a wild card invitation, which is available sometimes to athletes whose home countries do not field a team in the sport in question. Kulsoom knew she was unlikely to medal on her own, which meant the wild card was her only option. Toward the end of June, after campaigning for a spot, she learned she wouldn’t be going to the Olympics, which was disappointing, but not a reason for her to stop training.

2012 would turn out to be an amazing year for athletes from the Middle East, with women representing Saudi Arabia, Brunei, and Qatar for the first time in history. Kulsoom has made her own history here in the United States and abroad, and possibly her Olympic dreams will come true in the future.

Read part two of our interview – Kulsoom discusses other aspects of the relationship between her religious practice and her training, such as diet and fasting.