Carries exist in a variety of forms. Here is a guide on how to squeeze the most athletic benefit from them.

Once we get to standing from all of the fundamental postures (lying, quadruped, and kneeling) we have three options:

There are no other options, and every exercise is a variation on one of those three. If you spend most of your training time in a bilateral stance, you will miss out on about 70 percent of the options available to you. And when it comes to increasing athleticism, you’ll find far more activities are dependent on a split or single-leg stance than they are on a bilateral one.

The Completeness of Loaded Carries

This is where loaded carries came in. They encompass all possible foot patterns. The movement begins by deadlifting the bells from a bilateral stance and then proceeds to be either single leg or split stance. If you can avoid dropping the bells and also maintain good posture, you prove that you have the following:

Carries exist in a variety of forms. Here is a guide on how to squeeze the most athletic benefit from them.

Perhaps the simplest carry is the farmer’s carry, or farmer’s walk. Simply begin by grabbing two objects of the same size and weight and carry them for distance or time. At RPT, we aim for every client to be able to handle multiple 20m laps with his or her bodyweight split evenly between each hand. Twenty meters is not a magical number, it is the rough length of the space we have.

The FMS crew is working on a test for postural control as part of their Functional Capacity Test that involves a 75 percent bodyweight farmer’s carry for a specific time. That elevates farmer’s walks on my list of useful movements to perform in the gym. Not only do they hit many functional markers, but they are also a useful systems check we can run on ourselves.

“When it comes to increasing athleticism, you’ll find far more activities are dependent on a split or single-leg stance than they are on a bilateral one.”

However, there are two drawbacks to farmer’s walks. One issue is they seem to help people put on muscle mass. While this is not a disadvantage for those who want it, there are large populations of athletes, such as runners and fighters, who need to be concerned about how much they weigh. In my experience, it is difficult to get people to cut weight while using heavy farmer walks.

Secondly, in terms of challenging the body, the farmer position is the easiest. Just like with foot positions, there are three possible hand positions – hands down, in the rack position, and overhead. These other positions are by far more challenging from a stability point of view.

A suitcase carry may be described most easily as a single-sided farmer’s carry. When I was young, I had to carry my own suitcase if I wanted to travel, rather than just wheel it about. I only mention this because some people may wonder why on earth it’s called a suitcase carry when you no longer need to carry a suitcase.

The reality of a single-sided carry is that it just doesn’t work well. If you use a moderately heavy kettlebell or dumbbell the weight will hit your leg and make it difficult to maintain posture. Your options are either to reduce the weight or choose a different variation, such as the rack or overhead carry.

The rack carry is perhaps the best combination of all for loaded carries. Keep in mind, the weight on your chest will make breathing difficult. The reason this is so important is that good breath function dictates how well you can do just about everything. If your breathing is compromised under load, you won’t own the necessary stability required in that position, and you will start to cheat elsewhere. If you’re looking to turbo-charge this version, I suggest bottoms-up carries. 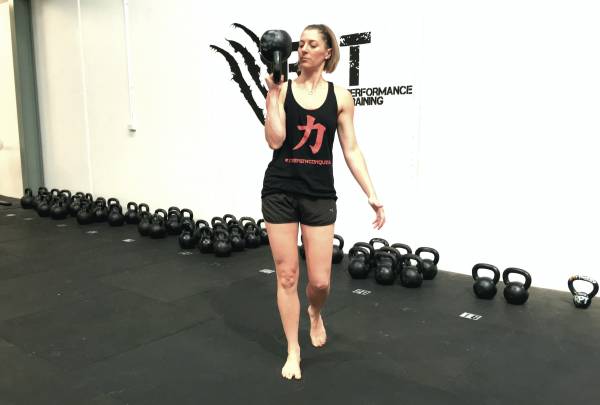 In the list of the hardest things I’ve ever done, log PT at SEALFit is close to number one. Holding something heavy overhead while maintaining good posture is hard. Even people with decent-looking pressing abilities may struggle when they have to hold load overhead for any period of time, and even the smallest glitches in their abilities will be highlighted.

If you decide to go with a double overhead carry, you may well end up with a few shoulder and neck issues from your clients. We discovered this at RPT when we started doing them frequently.

I always try to achieve as much as I can with every movement. While a symmetrical carry proves shoulder stability, midline stability, ownership of the three-foot patterns, and anti-rotational ability, we can make it even better by holding different loads in each hand.

By carrying two differently sized weights in each hand, and in particular by using rack holds and walks, we fire up the core musculature. Dr. McGill says of asymmetric carries:

“The asymmetric kettlebell carry uniquely challenges the lateral musculature (quadratus lumborum and oblique abdominal wall) in a way never possible with a squat. Yet this creates necessary ability for any person who runs and cuts, carries a load, and so on. The suitcase carry is another variation suitable for many advanced clients.”1

If you want to supercharge this movement, try using a large deadball, such as a 45kg+ ball, and placing it on one shoulder while walking or lunging.

Once you’ve worked with asymmetrical loads, the next logical step is to add in asymmetrical hand positions. Having one hand in a suitcase carry or overhead while the other does a rack carry is a unique challenge for the core. 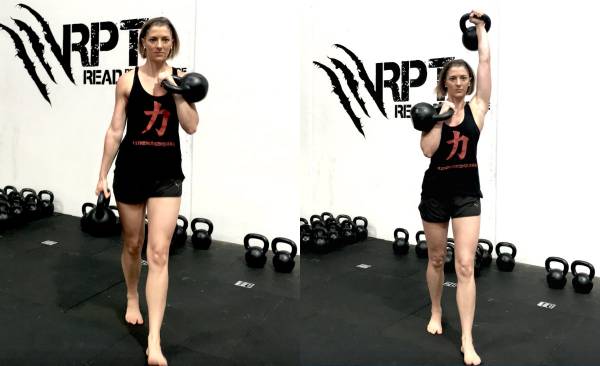 Having one hand in a suitcase carry or overhead while the other does a rack carry is a unique challenge for the core.

Keep in mind that for certain athletes (for example, those worried about their weight) carries may not be a great choice as they can lead to an overall thickening of the body. But if weight is not a concern, carries are a great way to improve both capacity and quality. By adopting unilateral or asymmetrical carries, you will hit even more qualities than if you opt for an even load in both hands.