Lululemon, Fat Shaming, and Turning a Profit in the Yoga Market

My Facebook wall has lit up with criticism over lululemon athletica’s founder Chip Wilson’s comments about the company’s trademark luon pants not being suitable for every size and shape.

Over the past few weeks, my Facebook wall has lit up with criticism over lululemon athletica’s founder Chip Wilson’s comments about the company’s trademark luon pants not being suitable for every size and shape. (You can read his comments here). In what must be the best-worst publicity ever, Steven Colbert even produced a segment naming Wilson his Alpha Dog of the week for this and other sexist comments. As an ambassador for this company and an often out-spoken feminist, I’ve been getting a lot of questions on my opinion. So, here it is, for those of you who asked and those of you who didn’t.

The Reality of lululemon

As much as I like to think lululemon is about goal setting, achieving a healthy lifestyle and building communities, the bottom line is it’s not. This is a publicly-traded clothing company, and its main purpose is to sell product and turn a profit for itself and its investors. I’m okay with that; I don’t think corporations and Wall Street tickers are the root of all evil. Even as a yoga teacher who decidedly does not do what I do for “the great pay,” I’m okay with companies out there making money on this industry.

Once I accept lululemon is a clothing company, I can put it in a class with other clothing companies at similar price points: Madewell, J. Crew, Urban Outfitters, even Nike, Under Armour, and Adidas. Admittedly, lululemon’s clothing is not made well for larger body shapes. But, are any of these companies making clothing that fits well on women larger than a size twelve? No. It’s not just lululemon. It’s every company out there. I don’t think these companies are trying to shame people into being thinner or trying to harm women’s self-esteem. They are making sizes that sell.

Here’s the harsh truth: while the national average size for a woman is a fourteen, this is not the most commonly sold size.1 Sizes six through twelve are the most commonly sold in America.2 There is a lot of speculation on why, ranging from the fact that larger women don’t shop as much to the income levels of women of varying sizes. I’ll leave out speculation and simply say this – it would be financially irresponsible for a company to invest money producing a product that will, statistically, not sell. While I don’t work for lululemon, I can assure you it has data analysts working hard to review sales numbers each day in order to better target its product and its marketing strategy. The company is simply responding to demand.

The Image of lululemon

A number of my fellow teachers have come out in statements against lululemon after Wilson’s comments. Admittedly, his statement was poorly thought out and came off as offensive. I don’t know Wilson personally, so I cannot say what his true feelings on the topic are. I can only say he needs to learn to think through his comments before putting them out in the public domain. This is not the first time he has crossed the line. In fact, the company has tried to distance itself from Wilson. He is no longer officially associated with lululemon. However, his role as their founder and a voice in the industry cannot be separated from the company’s image, so he should think before he speaks.

In addition to commenting on the issues with clothing for full-figured women, some of my fellow yogis have commented on their general feeling about lululemon, it’s products, and it’s corporate image. This is a hot topic debate. See, yoga teachers have this self-loathing guilt about making a career out of what we do. We all want to be successful in our careers, but we criticize anyone who actually makes it as a success, saying they only care about the money or they’ve sold out. I hear it time and again about companies like lululemon, YogaWorks, and CorePower, which recently sold to a private equity firm for $200 million. Somehow, because these companies have found success in taking yoga into the corporate arena, yoga teachers have decided they no longer represent “real yoga.”

This hate-The-Man attitude pervades much of yoga culture. In the words of one fellow teacher, “I’ve always been meant to feel like I needed to go along or become a part of [lululemon] to further my career.” While this is one opinion, mine is the opposite. I unapologetically support lululemon, even though it doesn’t always make sizes for larger women, even though its founder can say some really airhead things, and even though it’s yoga pants cost $98.

Why I Support lululemon

I practice yoga because I believe it is the path to my salvation. I teach yoga because I want others to find this path. But, when I chose yoga as my career, I also chose to make a product of my teaching. Because my livelihood is connected with teaching yoga, I have to market myself to my students and connect with my demographic. I do not feel I “need” to go along with lululemon for this. Rather, when a company approaches me and offers to connect me with a huge sector of the market – for free, so long as I support them too – I am thrilled. Is this selling out a bit? Yes, it absolutely is. But I think we all sell out a little bit each time we accept money for teaching yoga. I know my heart is in the right place, so I can handle that.

At the end of the day, whatever lululemon’s motivations, the company has helped make yoga a viable career choice for thousands of teachers and studios. So has CorePower. So has YogaWorks. These companies have expanded my market exponentially. There is more money to go around in the yoga market today because they have mainstreamed what it means to be a yogi. Lululemon has turned what we do into a tangible product. And, it should be mentioned, in addition to turning profits on this product, lululemon does some great stuff along the way. 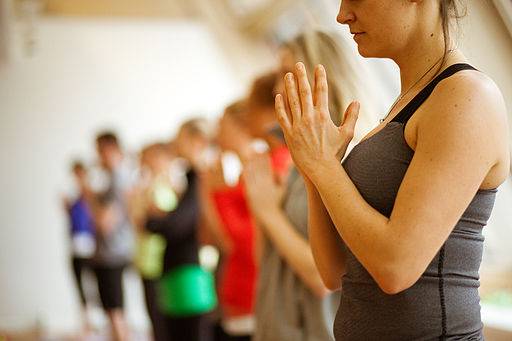 Lululemon stores across the country offer once-a-week free yoga. For many people, this is their first or only yoga experience. Lululemon pays for its employees to go take yoga classes, giving money to local studios in addition to bringing yoga to its associates. Lululemon encourages all employees to set lofty goals and think outside of the box in creating their perfect lives. I use lululemon’s goal setting sheets when coaching my junior varsity soccer team, and I find the values translate even there. Lululemon’s ambassadorship program is as close as any of us yogis will ever get to a sponsorship that helps us invest more fully in our careers. In exchange for this, we wear lululemon clothing (even though we are not forced to or even expected to). Twist my arm.

Candidly, I think lululemon makes the most durable – not to mention fashionable and functional – yoga clothing on the market. In particular, I think lululemon’s yoga mat, The Mat, is the absolute best surface out there. And The Mat comes with a lifetime guarantee. Seriously, I’ve ruined my own mat by washing it even though they told me not to, and they gave me a new one.

In gratitude for the many ways this company has helped me turn my spiritual path and passion into a viable career, I will always support lululemon. I may not support every comment that comes out of Wilson’s apparently far-too-open mouth, but I also recognize the views of one person do not reflect the views of thousands of associates in lululemon stores worldwide – many of who are a size twelve or above, by the way.