Male Body Image and the Pressure to Use Steroids

While girls typically worry about being too fat or too big, men are preoccupied with not being muscular enough – and sometimes feel the pressure to resort to steroids.

Poor body image and self-esteem issues are problems we usually associate with ladies, right? I have yet to see a man post a Facebook status complaining about how fat his butt looks or lamenting his lack of visible abs.

Poor body image and self-esteem issues are problems we usually associate with ladies, right? I have yet to see a man post a Facebook status complaining about how fat his butt looks or lamenting his lack of visible abs.

No, we ladies have the public displays of self-hate on lock, while the guys remain pretty much silent about how they feel about their bodies. We assume they must all think they look like a Calvin Klein underwear model. If they didn’t, they would tell us all about it, right? Apparently this is not the case. It turn out that dudes have body issues too.

The response was shocking to me because we never hear men complaining about how they look. There seems to be an unspoken man rule that goes something like this: Do not openly talk about your insecurities or you will be labeled weak or, in other words, man the f*&$ up and get over yourself.

As a result there are quite a few men out there who are suffering in silence. They are looking for approval from others. They are comparing themselves to other athletes, actors, and male models. They have insecurities just like the ladies; they just don’t shout it from the rooftops like we do.

I recently posted a status on Facebook saying I’d like to interview a few guys who have battled body image problems and were willing to talk about it. I thought I might get one or two men to reply.

I was overwhelmed and quite surprised with the number of men who volunteered to tell me all about their personal struggles with body image issues. In fact, there were so many I don’t have room to tell all of their stories.

As I learned of these men’s stories it became obvious to me that while girls typically worry about being too fat or too big, men are preoccupied with not being muscular enough.

Some who are not naturally lean also worry about being fat, but overwhelmingly men seem to feel pressured to match the stereotypical, super-hero physique of exaggerated muscularity combined with leanness and athleticism.

Young boys want to look like action stars, athletes, and bodybuilders. They want to fit into one of the categories that our society and media has identified as manly, attractive, or ideal.

Mark Wilson, who has battled with poor self-image since he was in the eighth grade, said of males he often saw in the media, “I wanted to be that man about as badly as I wanted a woman like that in the magazine to look at me so affectionately.” 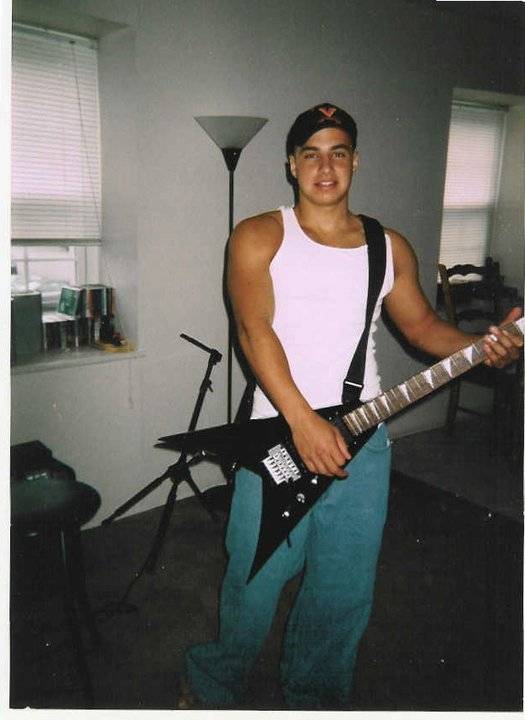 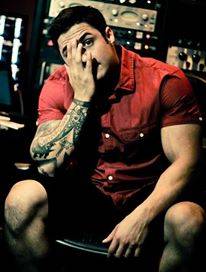 Which brings up another important catalyst for anxiety and negative self-image – puberty and the discovery of girls. Several of the men I interviewed said that when they began noticing girls and became concerned being attractive to the opposite sex, negative thoughts and anxiety about how they looked kicked into gear. Adam Pfaff, co-owner and coach at CrossFit Eastern Shore and former high school swimmer said:

It wasn’t until seventh grade or so that I started to think about what other people (primarily the more gentle sex) might be thinking of me as a scantily clad athlete. I always placed well in my events, so the idea of what I looked like still didn’t matter as much as winning did at this point, but the idea of “how am I looking outside of the lane rope” started to spread like wildfire. 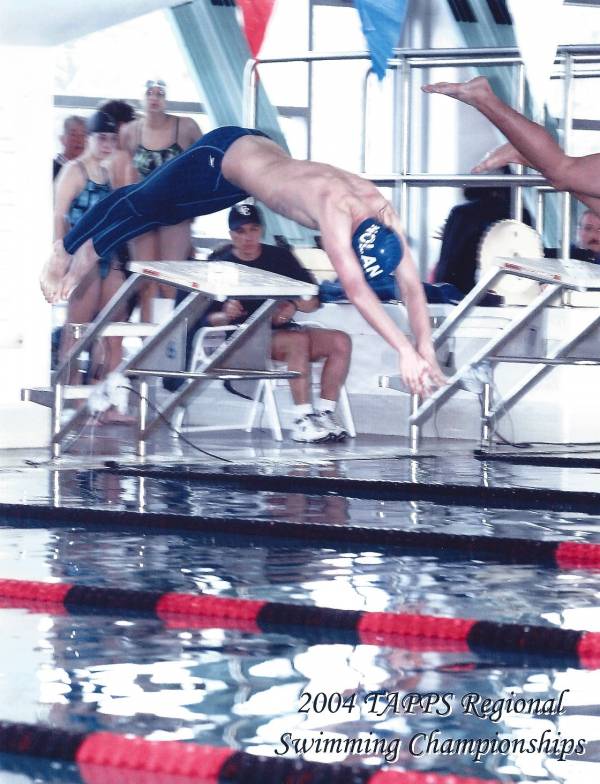 And what a very difficult ideal to live up to. Some of these ideals are in every way fake. No man could ever live up to the physical perfection of Superman, a truly made-up ideal created and brought to life via a pen, paper, and some illustrator’s vivid imagination. Nor could they achieve the muscularity and leanness they see in so many of the fitness magazines without giving in to the pressure to use illegal substances like steroids.

In fact, some men do end up using steroids in an effort to become more muscular and more lean, much like women who diet, purge, over exercise, and even develop eating disorders in an effort to match the images they see in magazines and on TV. 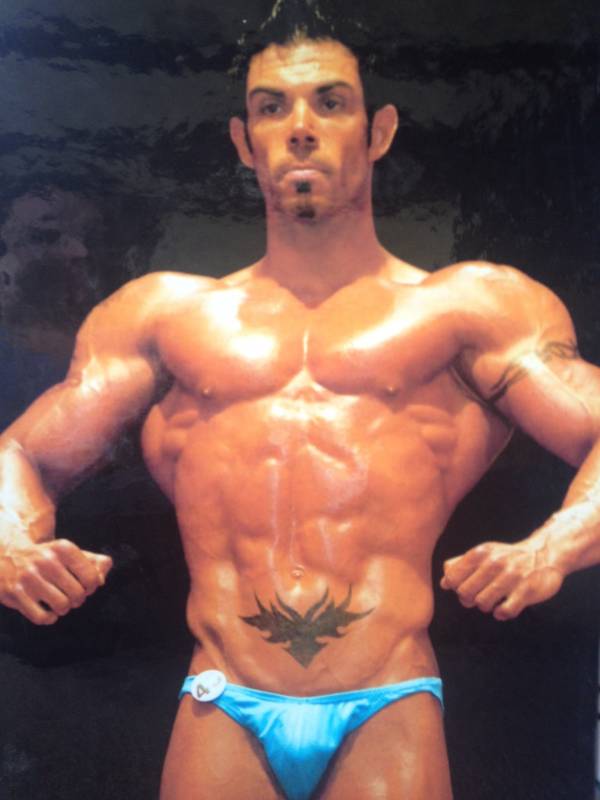 Even though Patrick was naturally strong, he was not naturally a large guy. He competed in a bodybuilding show and despite his best efforts still wasn’t as big and ripped as some of the other competitors. When he asked one of these men what he was missing, the man replied “You have to come to the dark side,” and so he did.

Patrick described that time in his life with mixed feelings. He was strong, powerful, and he certainly had finally achieved his aesthetic goals, but he also found that the steroids he used made him aggressive, edgy, and just not himself. 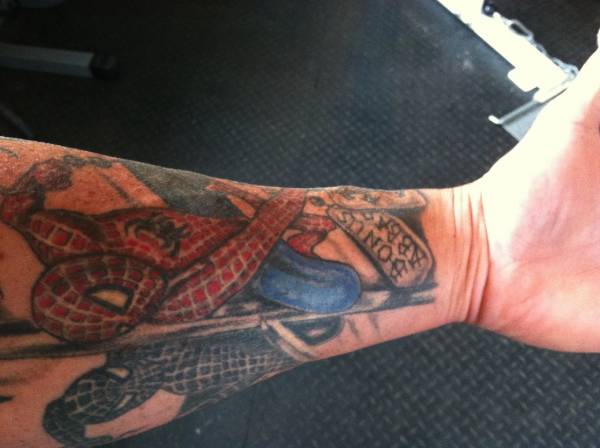 He has since given up steroids and says his daughter, Sidney, was instrumental in his decision to do so. He wanted to ensure he was his authentic self and that he was around to see her grow up.

He likened his experience with steroids to that of Spiderman when he dons the dark suit. Spiderman was stronger, more powerful, but also a nasty version of himself. Patrick now has a tattoo depicting the superhero to remind him of where he’s been and where he doesn’t want to return.

Mark Wilson also used steroids in an effort to gain size and become leaner, but he eventually gave them up because he wanted to come back to “center” and maintain a healthier, more balanced approach to fitness.

There were others like Chris Lofland of CrossFit EST, a former gymnast, diver, and baseball player, who felt the pressures to use steroids as well due to his naturally small, but athletic frame. However, Chris said the support from his friends and family and the feeling that using steroids would be cheating never allowed him to take that step.

But can you blame these guys? They were trying to achieve an ideal that just isn’t attainable without drugs for most people. It’s similar to the endless dieting, cardio, and diet pills that many women resort to in their quest to be thin.

Women and men alike feel pressured to match an image that is nearly impossible to attain, and certainly not naturally. Maybe it’s time we start paying more attention to men in this regard. Maybe we need to offer them the same positive body image messages so many women have benefitted from recently.

Now, I don’t expect men to start publicly declaring their love for their imperfections and we know we can’t change the media overnight, but as individuals we can each do our part to ensure we aren’t compounding the problem.

For instance, we girls could think twice before we post pictures of, say, Rich Froning, and then go on and on about how hot he is, in public, with no regard for our husbands, boyfriends, or male companions. Why is that okay for us to do but not men? And how does it make the everyday guy feel, who works his ass off at the gym but doesn’t look like an Adonis? Does he hate himself because he doesn’t measure up?

I think if we’re going to support healthy body image as a major piece of the fitness community, we should make sure it applies to both sexes. Let’s celebrate the smaller guy, the softer guy, and the guy who works his butt off in the gym but doesn’t have an eight-pack. Don’t they deserve the same support and respect? I think we all know the answer to that.