If you are interested in bodyweight training, you have probably read Combining Bodyweight Exercise And Weight Training For Maximum Benefit or, seen videos of Ryan Hurst on YouTube or Instagram. He made these tutorials for GMB Fitness, a company he cofounded to teach people how to move with strength and ease. There are many other videos of him playing around with physical skills and capabilities most of us only can only dream of achieving.

Recently, however, Ryan has been on an unplanned hiatus from his normal impressive repertoire of physical feats. In July of 2016, he broke his ankle while skateboarding with his son. He had surgery to pin his ankle back together, and it took a while before he was able to put any weight on it at all.

Most of us would view a significant injury like this as the end of the world; a kind of training purgatory. Getting back to even a remote version of our prior physical selves would seem daunting, and other than physical therapy, the wait would seem endless. But as Ryan and I discussed his strategy for recovery, I realized his strategy was a great example of what makes GMB so effective, and what drew me to GMB in the first place.

A Bodyweight System for Physical Autonomy

“What do you really need in your life to make you feel good about yourself?” ponders Hurst, during a Skype interview. We are discussing fitness, goals, and the general evolution of GMB. The ultimate goal is something Hurst and his team call physical autonomy.

When Hurst started GMB Fitness in 2010, together with his friends and fellow martial artists Jarlo Ilano and Andy Fossett, their goal was simple: to teach “fitness and wellbeing through bodyweight training.” While Hurst incorporates movements and principles from things like martial arts, yoga, and gymnastics, it’s not really any of those things. Instead, it’s a curriculum and a methodology for developing usable physical abilities. It gives you the confidence to do “what you want to do, when you want to do it.”

I stumbled upon GMB in 2011, as they were launching their online programs. At the time, there were only two programs available: one centered around gymnastics rings training and the other around parallettes. As a longtime yoga practitioner, I understood the value of strength, but I was bored with traditional weightlifting, and wanted something that would give me both strength and body control.

As the company grew, so did their programs. In addition to parallettes, rings, and floor skills, they added programs to address general motor control, with regressions that broke skills down into manageable pieces.

Physical autonomy means you can do what you want, when you want, with your body.

The AAA Framework for Progress

One thing GMB doesn’t promise is shortcuts or hacks to achieve impressive skills. The GMB method is about consistency. “We have to go through that stage of being bad before we can be good,” Hurst says.

As someone who’s always been considered “naturally strong,” this is the aspect of skill acquisition that stumped me for years. When I wanted to learn how to handstand, I decided to fling myself up into the air several times in a row, a couple days a week, and assumed my body would get it. I tried this for a month, before getting bored with my lack of progress.

Finally, I abandoned the goal and moved on to things I can do. Why deal with my weaknesses when I could focus on my strengths? What I neglected to realize was this: until I worked on the different components of handstands and practiced the basics first, I was never going to consistently stick a handstand. This, and I needed to do a lot of bad reps in a thoughtful way before any sort of semblance of a handstand would reveal itself.

The foundation of all of the GMB programs is the AAA framework:

This framework can be applied to any type of physical goal. For instance, if you decide your goal is to deadlift 300lb, but you haven’t deadlifted in 25 years, the first thing to do would be to assess your ability to hip hinge. How is your form? Where are you getting stuck? How is your mobility? Next, you would address your weaknesses by improving mobility in restricted areas and working on motor control to perfect your form. These exercises might look simple, but they are laying the foundation for the complexity of the deadlift.

After working on this consistently for 3-4 weeks, you might retest your deadlift with light weight and see how it’s coming along, before demanding the strength, mobility, and motor control required to lift heavier weights. In other words, you start by building a solid foundation in order to hold the weight of the complex skill.

Train Where You Are Today

The AAA framework can also be used at different points in our training cycles. Hurst has used it daily since his injury to assess how he feels compared to the day before, address his current mobility and strength, and apply his improvement to more challenging training.

“Instead of doing bear, monkey, and frogger for 3 minutes each,” he says, “I did it for two minutes, and I broke it down into one-minute sections. I slowed things down so that I was really feeling the range of motion in the ankle, instead of cranking out a bunch of stuff. And I did the rowing machine because there is minimal impact to the ankle.” The day before, his ankle had been achy. So instead of pushing through the discomfort, he had his wife do acupuncture and massage on it, letting it rest. “It’s not that I’m not doing something. I’m just being smart and adjusting according to that day.”

There is a wisdom in this mindset that comes from experience. Hurst is in his 40s and says, “you can come back from injuries if you are true to yourself, listen to your body, and don’t do stupid stuff during rehab.” Nobody wants to be injured, but life happens. In his case, it was a freak accident that no amount of strength and conditioning would have prevented. For some of us, it’s a little more mundane, like overuse injuries from not cycling through workouts, or stepping into potholes while running in the dark (which I totally did this morning).

We tend to ignore what our body says during workouts. We push too hard, try to come back too soon, and get frustrated when the recovery process is set back, the strength we want isn’t there, or the skill or PR we are working toward eludes us. Learning to listen and accept where we are each day is what allows us to move forward and break through plateaus. 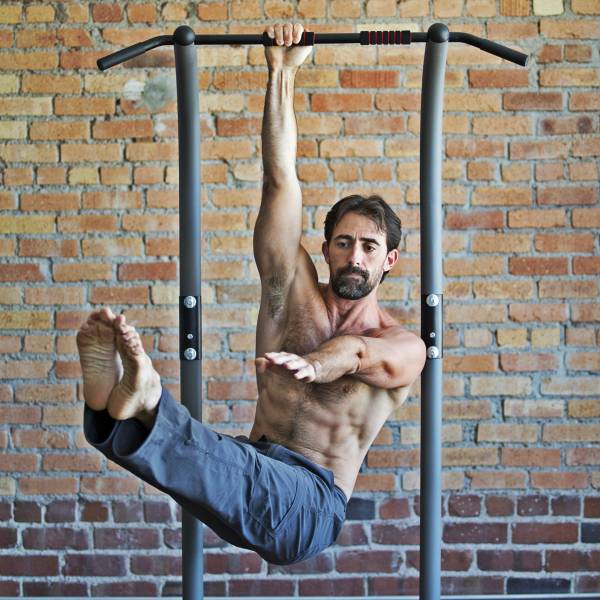 If you don’t listen to your body, you’ll only sabotage your own progress.

Learn to Move Without Fear

The underlying goal of GMB is physical autonomy, which is the ability to use the body in all the ways you want and need to use it. The most basic program, Elements, focuses on improving strength, motor control, and flexibility in a surprisingly profound way. Elements taught me that years of running hills and doing lunges did not translate to the ability to move in a deep squat for minutes at a time. It was the work I did in Elements which finally gave me the shoulder mobility required to access a more consistent handstand. It also addressed basic mobility deficits I had been ignoring.

One of the things that drew me to GMB was this idea that strength, mobility, and motor control can empower you to move in an uninhibited way. Fitness tends to be neatly separated into compartments. You can be strong, flexible, or endure, but is it possible to have all three at once? GMB says yes, you can have all three.

“Do it for yourself,” Hurst says, while discussing why people should train their bodies. Does your exercise program help you in other areas of your life? Does it allow you to do things you want to do, when you want to do them? If you have a fitness hobby (i.e., running, yoga, martial arts, parkour), is your program helping you be better at those things? When you take time to discover your “why,” the bigger goal tends to unveil itself.

As we get older, our goals and perceptions of ourselves change. Hurst says recovering from his current injury has given him an opportunity to evaluate the next stage of his life. “Here in my life right now, I’m not an athlete, nor do I need to train that way, nor should I. It’s forced me to go back to the very basics, refine my technique, and look at my ease of movement, as well as the quality of my technique.”

Figure out your why, and allow your exercise regimen to support it. “It’s not about six-pack abs,” Hurst says. “It’s just not. Once you get those six-pack abs, what’s next?”

If you’re looking for a shortcut, don’t hold your breath:

Jenn Pilotti is a movement educator, awareness, mobility, and strength specialist, and general nerd about all things movement. She holds a B.S. in exercise science with an emphasis on physiology, an M.S. in human movement, and has written two books about movement, the first of which, “Body, Mind, Movement: an evidence-based approach to mindful movement” is available now. More information, including upcoming events, can be found on her website.