There’s a frequent debate between vegetarians and paleo diet enthusiasts over which is the healthier option. And for good reason it seems, as both sides seem to have legitimate health advantages. Anyone with a scientific and logical bent, however, sees this issue as perplexing.

How is it that two diets that are almost complete opposites can reasonably claim to be healthier? In a study published recently in the Nutrition Journal, researchers think they might have found an answer. Of particular interested in this study was the enzyme called alanine transaminase (ALT). ALT has been shown to correlate more strongly to obesity than other typical health and metabolism factors, like cholesterol levels, blood pressure, and even blood sugar.

ALT is a key component of the alanine cycle, an important energy-producing system of the body that is often ignored by exercise enthusiasts. It typically takes a back seat to the lactic acid cycle, another important energy producer during intense exercise, but it is now being brought to light. While ALT has natural ebbs and flows, especially after anaerobic exercise, the researchers believe it is genetically higher in many people. This means the alanine cycle is also more robust in these individuals. Since the alanine cycle uses protein to create energy, the researchers believe this to be the key difference granting health benefits to both vegetarian and paleo diets.

The essential idea is that excess macronutrients are used to meet energy demands and energy storage. That’s pretty basic stuff that most of us know. Once we factor out the fats used for structural components like membranes and hormone production, as well as the proteins used for muscle and enzymes, we have whatever macros remain of a meal, and our body needs to deal with them. Because carbs are best used to create glycogen and to produce immediate energy (think: “sugar high”), carbs in a meal will be used mostly for those ends. Fats are best used as – no surprise – stored energy. Protein is slower digesting than the other two, but it can be used for either immediate energy or stored energy, with a preference for the former.

When both carbs and protein are present in a meal, carbs are used first to supply immediate energy needs, since they absorb faster and are typically only used for energy production. Once the slower digesting protein is absorbed, the immediate needs are accommodated already by the carbs, and thus any excess protein becomes fat. This process is exacerbated in people with elevated ALT, who have a greater capacity to convert protein into energy (immediate or stored). This ALT factor has wide reaching and substantial implications for athletics, obesity, and health for people of every diet. 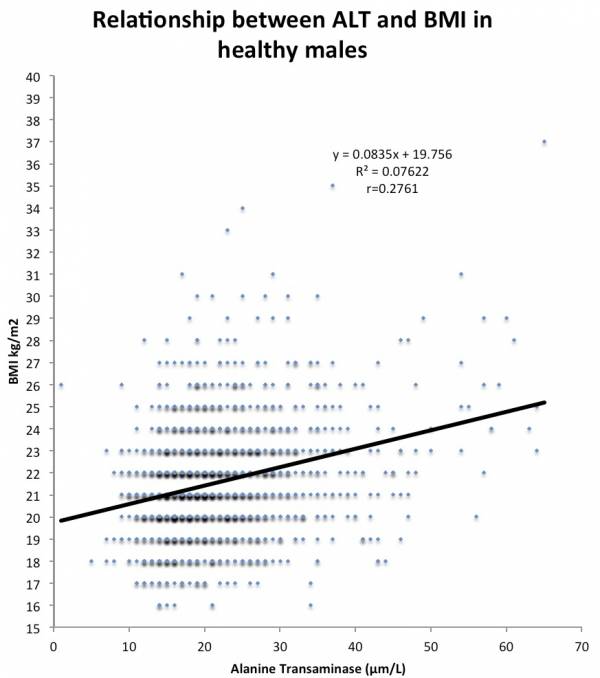 While the finding is significant for nearly everyone, it requires a massive body of literature to elucidate its details. Until we get more information, we have a plausible explanation for the health consequences of vegan versus paleo diets. And don’t forget to watch out for those high post-workout carb-to-protein ratios, which we now know to be less important than we thought. They may actually create more fat than you think.