Everyone wants the easy fix these days. They want the magic bullet, that one thing that will take them from ordinary to extraordinary.

The fitness industry doesn’t help either. We allowed people to be fooled for years into buying products like Six-Minute Abs, (we all know five minutes won’t work – the extra minute makes all the difference). We went from doing twenty sets per body part, up to one hundred sets per session, and down to a much more minimalist approach.

This is where the book Movement Restoration, written by Brandon Hetzler of the Athletic Development Institute, comes in. Brandon is a crazy smart guy who comes with a legit research background in exercise science. Some of his work on kettlebells opened my eyes to a better way forward when it came to training. So, when he told me he was writing this book, I was pretty excited.

A Better Way to Train

The rise of minimalist training has seen the rise of minimalist corrective work, too. We want to be able to find one exercise that takes us from a low point of function to a higher one. Lately it seems like crawling has become the one-size-fits-all fix for everything that ails you. While developmental patterns – drills done in lying, quadruped, and kneeling – are a great way to get people quick fixes, crawling isn’t the only answer.

The problem for many people comes when they start to dig a little, perhaps by going to the Functional Movement Screen (FMS). The FMS is the world’s number one corrective system and relies heavily on the use of developmental patterns. But it’s also a convoluted web to follow for many, with seemingly endless options and a bewildering array of choices to be made. So people once again look for a single option to fix everything.

For people who have been to FMS or SFMA it is common to feel a little lost as the choices seem like they’re never ending. When you add in the works of Thomas Meyers (Anatomy Trains) and the host of work done on the NDS (neurodevelopmental sequence), you’re starting to look at a vast quantity of possible directions to go in, so it’s no surprise that people get confused, or don’t know where or how to start.

But movement doesn’t fix the body by itself, and if you look closely, all the top minds in both strength and corrective work address tissue quality first. Movement Restoration has an excellent chapter on mobility, stability, and motor control for that exact reason. Personally, I found that to be reassuring because I have been preaching to a mostly deaf audience for some time about the need for greater attention to stretching and mobility work. 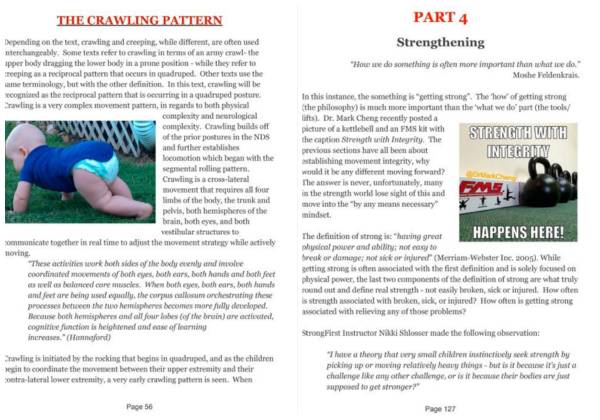 Using the FMS and SFMA as the starting point, Movement Restoration covers a lot of detail and science in easy-to-understand chunks. While I am a geek when it comes to reading about training, I don’t necessarily want to be bogged down with heavy science, particularly in a field like neuroscience. It’s just not my thing and it won’t help me get better at my job.

Movement Restoration gives you seemingly simple solutions to many of the questions people have post-FMS. There are a number of helpful charts in the book, illustrating which movements of the body are picked up in each of the screens. Many people assume that each movement will be picked up in a single screen, but they’ll be surprised to see just how many built-in back-ups there are within the screens themselves.

These charts are also matched by others showing how the screens tie in with Thomas Meyers’s work, which is something I’ve never really been able to wrap my head around. That’s the sign of intelligence – taking something confusing and delivering an elegant and seemingly simple solution. Movement Restoration is like the iPod of how to tie developmental and corrective work together.

The highlight of the book for me was the detailed description of what is actually happening in various stages of early learning. From reaching and rolling to the action involved in standing (hint – it’s different than what you think), the ideas were simply explained so they could be immediately useful.

My only complaint with the book was that the proofreading must have been done in the dark. There were a lot of small errors, and as someone who spends a lot of time writing, I found it frustrating. I understand the book has been re-edited now and hopefully those errors are gone, as they reflect poorly on what is otherwise a fantastic read.

Countering that, though, is the way Brandon’s work moves quickly from basic movements such as crawling to integration with traditional strength and conditioning methods. Usually people seem to get stuck in either a performance mindset or a corrective mindset and struggle to reconcile how to be in both at the same time. Movement Restoration shows a way forward that more people should be paying attention to.

If you’re interested in learning more about the work of the Movement Restoration crew (which is comprised of Brandon as well as former Master RKC Jeff O’Connor and Senior SFG Jason Marshall) you can follow their Facebook page. Not only do they have another book in the works, but they also run workshops that cover the entire gamut of subjects, from corrective exercise, to movement quality, to strength work.

“Movement Restoration” is available for $33.16 at Amazon.com.