There has been a lot of interest in concurrent training in scientific literature lately. Concurrent training means developing your cardio and strength goals within the same week, instead of breaking them up as you would with many classic periodization models. The literature usually focuses on the effect of strength training on running, but the results of these studies are of interest to other athletes as well, especially those who do a jack-of-all-trades type of program like CrossFit.

One such study came out this month in the Journal of Strength and Conditioning. The research was the first of its kind to compare muscular endurance protocols and strength protocols through a full training program and through a detraining period as well.

The routines were simple enough. All of the runners were already doing a simple endurance workout with resistance bands. This routine was a circuit run twice through with 25 reps each of four leg exercises. The control group kept doing this normal routine. The strength group did supersets of a strength lift and an explosive exercise for 3 sets each, with either 70% of their max for the strength lift, or their bodyweight for the explosive exercise. The muscular endurance group did a few basic leg exercises for 3 sets of 20 reps with 40% of their max. All of the runners kept up with their normal running routine.

Of particular interest to runners and anyone else doing relative load exercises like pull ups, dips, and push ups was the focus of the routines. The workouts were designed to avoid weight gain but still improve strength and performance. Indeed, after twelve weeks of doing each of the three programs, there was no change in bodyweight doing any of the protocols.

Despite no change in body mass or body fat, both the muscular endurance and strength training groups improved strength, running economy, and peak velocity. Even more importantly, the strength training group improved their actual 3km time trials, indicating an actual transfer of these results to performance. Additionally, the benefits obtained during these programs were maintained by their normal routines for five weeks after ceasing the programs. 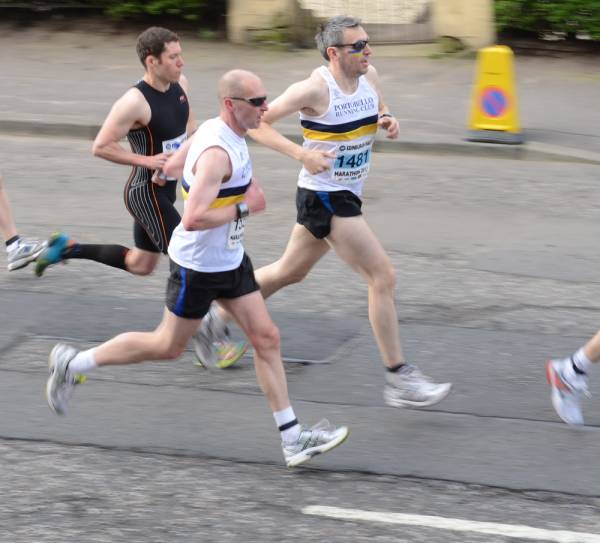 There were a few unique aspects of this study that made it interesting. First, the program the athletes did normally was similar enough to the muscular endurance protocol that it might have stunted their results. If there had been more of a difference between the muscular endurance routine and the few leg exercises that the runners regularly did, the results might have been even more significant. Even more interesting was the examination of the effects after a five-week detraining period in which the runners returned to their normal routines. Many of us wonder how much our normal routines maintain any results we gain, or if we just lose them as soon as we stop.

Before this study, it was fairly well established that concurrent training is the way to go, not just for people with varied goals, but also for endurance athletes. This study provided further evidence that muscular endurance training combined with strength and power training is effective, although the latter seems like it might be more useful. Perhaps the most important result is that so long as we can keep up some form of training, our hard-earned results will probably stick around, even if we need to take time off.