I flunked out. The past four years of pursuing professional baseball at all costs was valiant in effort, against the odds, but I fell short of my ultimate goal. Much like my collegiate clock ran out in 2011 while I was recovering from a broken hand, so did my self-imposed clock on how long I could pursue a shot at Major League Baseball.

My name is Dan Treccia and I have signed contracts in America’s top independent league, the American Association of Independent Professional Baseball. I’ve also had the honor of playing in the Intercounty Baseball League in Ontario, Canada, joining the likes of former MLB players Fergie Jenkins and Scott Thorman, among others.

Me back in my baseball days.

After my release from the Grand Prairie Airhogs this spring at the age of 27, I decided to switch my competitive focus to CrossFit. I made my baseball career with a foundation of fitness. I spent as much time working out to get stronger and faster as I did hitting, throwing, and practicing baseball. To hit home runs and run fast, I put in hard winters pushing and pulling weight in the gym, so it seemed like a good idea to transition to a sport that required working out.

I had previously seen CrossFit on television and wondered to myself, “Do people really want to watch people workout?” My guess was no. I couldn’t have been more wrong. And that wasn’t the only thing I was wrong about when it came to transitioning from pro ball to (hopefully) pro CrossFit.

CrossFit and baseball are both sports, but that is where the similarities end. My baseball training was centered around becoming explosive on my feet and hitting the ball as hard as possible. That framed my training around heavy lifts, which I worked up to over the course of the off-season. My focus was on the powerlifts (squat, deadlift, dumbbells for bench pressing) and maximizing my peak strength sometime around February.

“As a baseball player, I had to have a ground-up training approach and maintaining flexibility was of ultimate importance. I didn’t do some upper-body exercises like the bench press and the military press, not to mention the Olympic lifts, because the risk for injury was too great.”

After I had maxed out, my training would switch to pushing and pulling sleds, a lot of sprinting, and rate-of-force-development workouts consisting of plyometrics performed as fast as possible with minimal weight. I worked a lot on acceleration, and the maximum time I spent sprinting, performing sled sprints, and doing hill runs was no longer than ten seconds at a shot. This was so I would develop peak speed, while maintaining peak power and strength.

In contrast, CrossFit requires me to mix in endurance, which is a challenge after years of focusing only on peak speed, power, and strength. For example, I am used to squatting in sets of 3-5 reps with 80-95% of my 1RM. Going to strength-endurance sets of 10 reps at 70% of my 1RM has not only been taxing on the muscle, but on my cardiovascular system, as well.

The easiest part of this transition has been my attitude. I can take a challenging workout and grind through the misery loving every bit of it. I have not hit a wall yet and I attribute that both to smart programming (not diving into elite CrossFit right away) and a sound fitness base I attained while training for professional baseball over the years.

Right now I consider myself to be quite strong at 6’2” 230lbs with a 555lb deadlift, 455lb squat, and 325lb bench. I can run a sixty-yard dash in 6.5 seconds and metabolic conditioning is nothing new to me. Having a solid base of fitness and strength can only benefit me in starting each lift or CrossFit WOD. Sometimes I get off to a 1:25 pace on the C2 rower for my first 300 meters, and while this intensity obviously fades the longer I row, it is nice to know I can pick up a great pace when I need it. 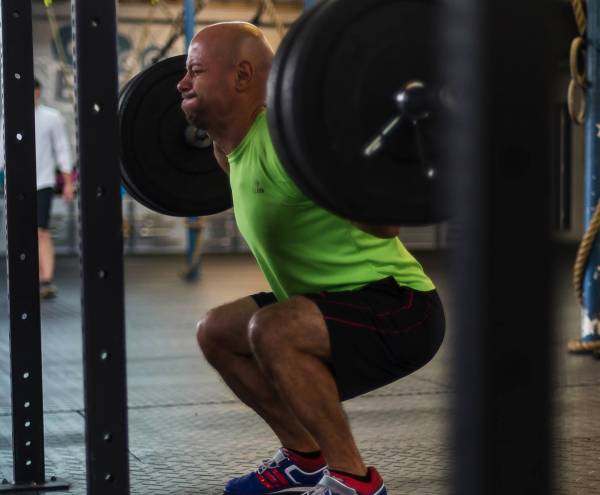 CrossFit requires a mix of endurance, strength, and power.

I just did my first handstand two weeks ago. I was pleasantly surprised I could support my weight, but now I have to get better at handstand push ups as well as walking on my hands. When that day comes, I’ll feel pretty good about approaching competition, but that day is a few months off for me.

“Now that I’ve removed the baseball portion of my training, I am starting upper-body strength work, as well as Olympic lifts and gymnastics.”

The reason is, I never trained upper-body strength nearly as hard as my lower body and core. As a baseball player, I had to have a ground-up training approach and maintaining flexibility was of ultimate importance. I didn’t do some upper-body exercises like the bench press and the military press, not to mention the Olympic lifts, because the risk for injury was too great.

Now that I’ve removed the baseball portion of my training, I am starting upper-body strength work, as well as Olympic lifts and gymnastics. All three are essential to CrossFit, so a majority of my work is on addressing these weaknesses. At the moment I am pushing the weight on my push press and clean and jerk, but I have yet to address the snatch with anything besides technique work. It will be interesting to see if I can put it all together in time for next year’s Open.

One specific training strategy I’ve adopted is to center my upper-body work on the shoulders. I get my push presses done in max-strength sets of three reps while I also mix in push presses and thrusters for endurance on specific metcons. I also do dumbbell Arnold presses to assist in shoulder development and endurance by using them in my assistance work once a week.

“[F]at weight is dead weight. Fat cannot move the body in motion. As long as the weight I have is muscle, it should be able to move itself.”

I’ve keyed in on shoulders not only because I am weaker there, but also because they are featured heavily in competitions in the form of the clean and jerk, thruster, handstand walk, handstand push-up, and even wall ball throws. I think of gymnasts and how they have lighter lower bodies and strong upper bodies so they can propel themselves around more easily. But then, I also think about Olympic lifters and how they have strong lower bodies to move large weights from the floor to overhead. There is an ideal CrossFit body somewhere in between.

At 6’2” and 230lbs, I may be a little heavy, but if my weight is mostly lean mass, I should be able to perform adequately. After all, body fat is dead weight. Fat cannot move the body in motion. As long as the weight I have is muscle, it should be able to move itself. 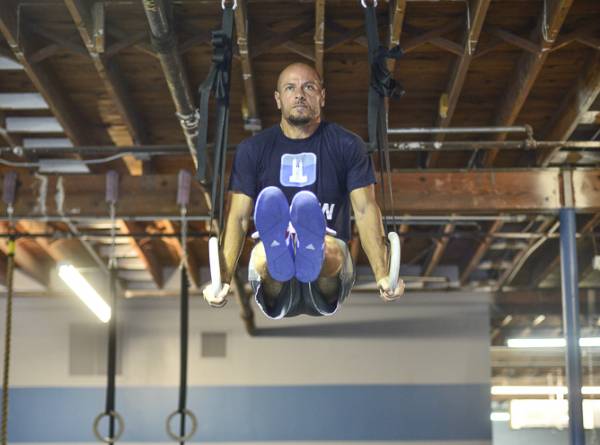 I have my eyes set on the CrossFit Open in 2016 with intent to qualify for Regionals. There are many reps of strength-endurance, Olympic lifts, and handstand push ups ahead of me. I will have to train rigorously to be ready for the Open. I will have to run a continuous mile for the first time since high school and complete programming in an undulating structure unlike anything I have ever experienced before.

So far, I have enjoyed confronting the weaknesses that CrossFit exposes. I have potentially found a sport besides baseball that I enjoy competing in. While I may have hit my last professional home run, I look forward to my first professional CrossFit competition. The most rewarding feeling is that I’m accomplishing something for a sport that I find both interesting and challenging. It fuels my competitive fire and I am just so happy I found CrossFit when I did.

Photos 2 and 3 courtesy of CrossFit Empirical.

Daniel R. Treccia was raised in Geneva, Illinois, and grew up loving baseball. He had taken his passion for the game from the little league fields of his hometown to NCAA, independent and international pro, and MiLB stadiums across the continent of North America, playing in both the United States and Canada. Becoming a professional baseball outfielder was not easy to achieve for Daniel, he worked tirelessly at it for the better part of 25 years. For twenty-seven years he developed into a well-known power hitter in the independent minor leagues with a rare addition of speed on the base paths, playing for the Grand Prairie AirHogs, Sioux Falls Canaries, London Majors, Burlington Bandits, Guelph Royals, Hawaii Stars, among other teams over a five-season career.

Daniel has developed a real passion for teaching the game of baseball and all forms of sports performance training to younger generations and healthy adults who want to improve their physical wellness. Since 2014, Daniel has coached varsity baseball with two I.H.S.A. and worked as a private hitting instructor.