It’s the American dream. In baseball, anyone can make it as long as they work hard and have a little luck. What I learned from my years in MLB and what it taught me about life.

Baseball, like life, is an every day job. There is less of the feeling of “Friday Night Lights” in baseball than in nearly any sport, but life doesn’t feel like that either. That’s why I think Americans have such a heartfelt connection with baseball. Football and basketball are exciting sports, but most folks can’t relate. When it’s normal that the best player in baseball can go 0-4 with two strikeouts, people recognize the egalitarian nature of who can play and the unavoidable truths of good days and bad days. It’s the American dream. In baseball, anyone can make it as long as they work hard and have a little luck.

I was always an exceptional student, but any lesson I’ve ever learned with some serious, life-altering substance came from the game of baseball. As long as I can remember, I set out to be a professional baseball player and, boy, did I sign up for a wild ride.

As a hitter, to master the game of baseball means to have success just thirty percent of the time. Immediately, there is an unavoidable battle with success and failure built right into the foundation of the game. On top of that, baseball is an experiential sport. To master it is to be very specialized. Sure, athleticism helps, but even I will admit one need not be a great athlete to be a great baseball player. Running track or playing soccer, for example, means less for one’s ability to have success in baseball than nearly any sport. As they say about athletes trying to learn baseball, “You can’t steal first base.”

So far, we’ve outlined that playing baseball, by nature guarantees, at the very least, a ton of failure. Also, getting good at the sport require a lot of skill development that cannot be acquired outside playing the game. Therefore, to be good one must endure thousands and thousands of seemingly negative experiences to make progress in the sport. Soon, players begin a process that looks like a giant funnel from many participants playing Little League and t-ball, to fractions of one percent of those playing professionally. Most of this weeding process, however, has much more to do with the intangibles of the sport than the physical skills, like who can hit, field, run, throw, and catch.

Could you devote hours a day, nearly every day of the year, for a decade or more to experience stretches of failure like an 0-for-20 streak? Going 0-for-20 in the commercial real estate business would mean losing your job. Try shooting 0-for-20 from the field in the NBA. You might as well turn your jersey in before the buzzer even sounds.

Alex Rodriguez gets paid $25 million dollars per year and will have streaks of failure like this multiple times in a single season. His thoughts? “I don’t worry about it,” Rodriguez said. “I always look at baseball like the stock market. You don’t look at it every day. When it’s a good stock, after a long season, it’s going to be there.”1

That is the biggest lesson of all. Masters of the game of baseball have a characteristic that masters of the game of life often share. They are process oriented and ferocious in their preparation, but they waste no time with that which they cannot control. The Petri dish that baseball creates to test this skill has incredible relevance to life outside of the sport. 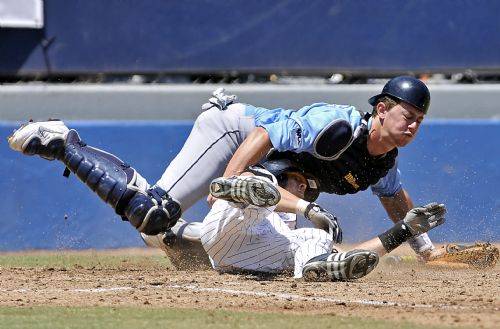 We all want results, regardless of your task, career, desire, etc. We all want performance. The funny thing is success is scalable. One million hours of work may result in fame and fortune for me, but one million hours of work may result in failure for you and visa versa. There are too many uncontrollable factors to say, “If you do X,Y, and Z you will get success” in any given arena. Life throws us slumps and challenges we could never expect, just like baseball.

So what do we do? The hard part is that the best way to get results is to focus on the process. It’s like playing Black Jack. You can play the game by the book and mathematically create the biggest advantage possible, but when you’re down two thousand dollar in ten minutes, your emotions creep in. This is where “hitting” when you’ve got eighteen happens out of frustration or desperation. Major Leaguers always play the book. It’s how they got there. They are masters of the plan, even when they are 0-for-20.

A common stereotype of baseball players is that they are arrogant. I won’t disagree. I’d like to defend this stereotype in that it takes something like arrogance to have enough dignity to expect success when recent history, public opinion, and even the odds say otherwise.

Whether you ever played Little League or not, I think we all can relate to the good days and bad days life has to offer. Anyone and everyone could benefit from the skills taught in the classroom that is the baseball field. Results are largely out of our control. Working the process increases one’s chances of success – nothing more, nothing less. Control what you can and always step up to the plate like you’re 20 for your last 20.