No, You Don’t Hate Running

Of all the training modalities that I coach, none is so universally despised by its non-practitioners as running. People go out of their way to describe their hatred of it, screwing up their noses and illustrating the displeasure it brings them with the same color and detail a connoisseur would use for a fine wine.

But like so many other areas of life, I’ve found that most people hate running because it’s so foreign to them. For an activity that is so undeniably human, our culture has done a remarkable job at segregating it from our normal lives. Kids are discouraged from running almost as soon as they learn to do so. After all, they might fall down or break some precious, inanimate object. Never mind that learning to fall without injury is a fundamental and useful human skill, and that none of the things that your kid will break when they bump into the coffee table matter at all, when compared with their health and physical development.

We have decided as a society that running is for football players (six seconds at a time) and Olympians (once every four years). For all others, running is something you do only when being chased by a bear. If you choose to run with any regularity outside of those circumstances, you are a weirdo, a pariah, and possibly a psychopath.

Don’t believe me? Go ask your next CrossFit class if they’ll join you to train for a 10k. I bet I will hear the groans all the way from Ohio. Better yet, gather any group of friends together, and I bet you can replicate the following situation:

Look, I get it. In a lot of ways, I hate running too. People are surprised when I tell them I hate 5ks, and that running a fast one is just as painful today as the first one I ever did. Running is hard, takes a lot of time to do correctly, and can hurt a lot when you do it wrong. Just like every other sport.

I am a running convert. I openly and vehemently professed my hatred for running for years, so I can speak with intimate familiarity to the reasons most people hate it. I can also tell you why those reasons are totally illegitimate.

From weightlifters to cyclists to yogis to couch potatoes, the biggest complaint I hear is that running just “sucks.” By that, they mean that it doesn’t feel as good as their chosen fitness regime (especially if that regime is doing nothing at all).

Let’s address that last group first. Running is going to suck if you don’t do it until you absolutely have to. Most people who tell me that they hate to run sound like a 4-year-old who says they hate broccoli, when they’ve never tried it. Teaching your body to run is a lot like teaching your kid to eat stuff. They’re going to hate it at first, and kick and scream and throw things on the floor. But you know better than a toddler what is good for them, so you make them keep trying stuff anyway, and eventually they like it.

Likewise, you are going to have to try to run a lot of times before it starts to make sense to your body. The longer it’s been since you ran with any regularity, the longer it might take for you to become acclimated.

The good news is, you’re somewhat smarter than a toddler now, which means you can be taught. If your parents and teachers didn’t bludgeon you with “walk don’t run!” when you were a kid, there’s a chance that natural running mechanics have followed you into adulthood. For you, learning to run will be a reasonably short and possibly pleasant process. For the rest of us, we will have to spend a lot of time re-learning the correct movement patterns and skills so we don’t hurt ourselves.

In short, running sucks because we suck at running. While there is no denying that our bodies were designed to run, and run a lot, our years of neglecting the skill mean that we must be reeducated. The vast majority of new athletes who walk into my gym must be taught proper squat mechanics; a process that can sometimes take months. Running is orders of magnitude more complicated than a squat, and requires all the same phases of neuromuscular reprogramming to do correctly.

Is it any wonder we hate running as adults? We’re forbidden from doing it, aren’t taught the skill, and are then handed piles of it as punishment. So yeah, running sucks, but only because it’s been made to suck every time it was presented to you for your entire life.

Start With a Clean Slate

The first step to fall back in love with running, the way you were as a little kid, is to drop all of your existing mental associations and expectations. It won’t be easy, or simple, or joyful right away, but it will become so if you choose to put in the effort. You will not be able to run very fast or very far for a while, but that’s okay. You have the rest of your life to get this figured out.

The next thing you have to drop is your previous approach. Up to now, you’ve treated running the same way you treat your diet. You wait until a few weeks before your fitness test or that charity 5k your office mates talked you into, and then you panic and run yourself to death, six days a week, so you don’t embarrass yourself on the big day. When it’s over, you limp back to your house, vengefully toss your running shoes into the back of the closet, and vow to never, ever do that again. (I may or may not have a decade of experience with that approach.)

Running must be approached with the same patience and methodical progression as any other athletic endeavor. You wouldn’t enter a weightlifting competition after a few weeks of randomly moving a barbell around, and neither should you take on your first half marathon without engaging some sort of qualified instruction. If running on your own isn’t working, find a club in your town and ask for their help. Most cities have one or more clubs sanctioned by USATF or RRCA, and these will provide a wealth of knowledge and experience, in addition to guided workouts and general camaraderie. 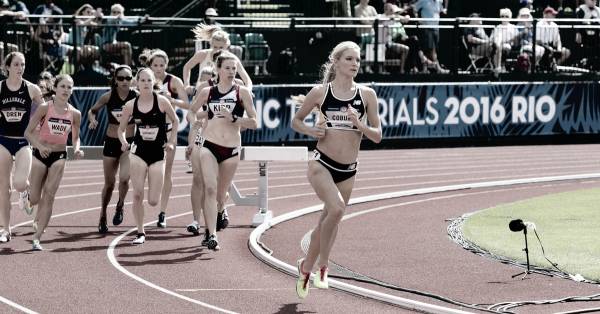 Which brings me to the last thing you need to let go of before you can stop hating to run. You’ve hated it to this point because of how you choose to do it: head down, alone, huffing and puffing, running out and back at a constant pace on a bland bike path, listening to the same tired Lady Gaga remix that pumped you up that one time six years ago.

If you want to fall in love with running, change everything. Run with people. Run with your head up, and take in the world around you. Get out on a trail, unplug your headphones, and soak up the sounds and smells of nature. Engage in a program that will develop all of the requisite skills of running, instead of shuffling along as fast as you think you can go, for as long as you think you can manage. Set goals, and think about hiring a coach to help you reach those goals safely and effectively.

Running Is Everything You Let It Be

Once you change your preconceptions of what running will be, you will find out what it can be. I find it so fulfilling today because it checks so many boxes. It can test your cardiovascular capacity and endurance; it can measure your strength, and challenge your balance and proprioception; and it can improve your movement economy on a global level.

But the benefits of running are even more psychological than physical. When it is short and intense, running is a triumph of will over the vociferous protests of the body. It can be peaceful and meditative; a way to escape stress and distraction and find peace by yourself. Or runs can be collaborative and relationship building, as some of the closest friends and best people in my life have been those I met on the track or trail. A run can even change your life, as anyone who has successfully completed a marathon (especially when the odds were long) will tell you.

Let this be the year that you conquer running. Go get a good pair of shoes, get a coach, get with some friends, and get out there. You are the only thing stopping you.

Don’t let the naysayers rain on your parade:

Running a Marathon Is the Best Thing You Can Do