While my friends and I were discussing the amazing feats of the latest superhero program on television, it struck me that learning martial arts is like obtaining superpowers. Heck, Batman doesn’t have much more than that, right? There was a group of us standing in a circle, earnestly discussing the abilities of Daredevil, Luke Cage, Iron Fist, Supergirl, Green Arrow, etc. It was as if we were discussing ourselves. We see ourselves in these characters and would like to have their extraordinary abilities. So, can we get super powers?

To truly emulate the beast physically, we must become the beast mentally.

What if you had the ability to fly or were impervious to pain? How about the power to eat whatever you want and not gain weight, punch through a wall, or inhuman acrobatic skills? What if you could be as strong as a beast or have the power of a tiger or dragon? I think most people would like to have these abilities.

People come to martial arts for a variety of reasons. For example, I was a victim of violent crime, and then decided to pursue martial arts to recover physically and mentally; I wanted to reclaim my power. Others I have known sought martial arts to provide them with a to stay fit, compete, and some secretly want to get as close to a super power as possible (although they might not readily admit it). Martial arts can give the practitioner power over the body, power over the mind, and power over circumstances.

Having the power of a particular beast, such as a tiger is like a superpower. I have studied beast styles for a long time now, and I enjoy them. What is a beast style? My own definition is a style that incorporates the desired attributes of particular animals as a means of expressing martial technique, ability, and strategy. (Wanting to be like a tiger for instance.) The styles that I have studied: Shou Shu and Xing Yi, both incorporate beasts.

I did have flash backs to bad Kung Fu films when I was first taught to use a “Tiger Claw,” and I felt more than a little self-conscious about it. “So am I turning into a tiger now?” However, when I felt the power of channeling the feeling of the tiger into the strike, and then feeling the impact of the swat of my hand/claw hitting a bag, and then hitting a body, I was convinced. It felt incredibly strong, just as though I was using some kind of superpower.

One only has to think of Rocky Balboa and his quest to get his mojo back in Rocky III by attaining “the eye of the tiger,” for an analogy of the internal qualities associated with beasts. Humans associate beasts with power. Our ancestors, and some primitive cultures, wore animal skins for warmth but also partially for the visage of the beast. Whether it’s horned helmets, dragon boats, animal teeth on necklaces, or team mascots, we seem to instinctively associate beasts with desirable traits. We want to be as powerful and courageous as the tiger, as mysterious and regal as the dragon. We want to harness the attributes of the beasts to help us compensate for what we often feel we lack. Although it is the external we usually talk about, it is the internal attributes we may actually seek: courage, confidence, definiteness of purpose, and decisiveness of action to name a few. To truly emulate the beast physically, we must become the beast mentally.

Over the years, and in a variety of ways, I have learned and used exercises that helped me get the feeling of the beast into my body. I think everyone should experience this. Below, I provide a “beast” exercise for you to try that is great for building leg strength and balance. It’s a great cardio workout as well. Please try the exercise below to build up your tiger legs. 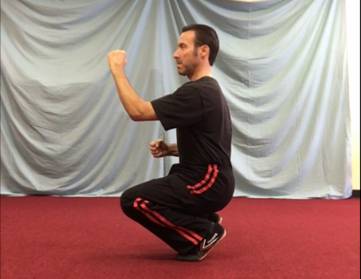 Remember to keep your back straight. [Photo credit: Noel Plaugher]

Try to do two sets of ten. But if can’t do two sets, then at least do one set. You will want to use a mirror to check your form. Watch out for things such as leaning one way or another, or hunching over when you are on the balls of the feet. Keep your knees together. Balance will likely be the hardest part as you rise and fall on your legs vertically. Do the exercise slowly until you have the mechanics of it down and then add speed. The tiger is known for its strength and power, especially for pouncing on its prey. This exercise will help to train your body to be more like the tiger.

For most, this type of training will provide some surprising physical challenges and enhance whatever style you study. I think we can all agree that strong legs, better balance, and improved stamina will help anything you do. For others, studying a beast style may satisfy your psychological needs for a better state of mind. And for a few, I hope, it will satisfy your inner nerd who wants to get as close to attaining a superpower as possible.

Want to improve your fighting skills?