Plyometric movements increase potential muscular force and speed, resulting in increased power. This can translate into many athletic skills, from higher jumps, to faster sprints, to bigger Olympic lifts.

Plyometrics was called “jump training” in the old days, but now we use this fancy Greek term (or “plyo,” for short). It’s a technique you can use to train for almost any activity that uses explosive movements. Think of a punter utilizing the full swing of his leg in a kick, or a weightlifter dipping before his jerk drive.

A plyometric movement starts with a muscle-lengthening eccentric action, followed immediately by a muscle-shortening concentric one. This is also known as a stretch-reflex motion.

Every time you land after doing a jump, your muscles go into an eccentric stretch. That gives your next jump (concentric contraction) even more power. But plyometrics are not limited to the lower body. Powerlifters will recognize this concept when they do a touch-and-go bench press. In that manner, they always lift more than they would with a timed pause. Squats also utilize the stretch reflex. Deadlifts do not, hence the name, “dead.”

Learning to “catch the bounce” is an essential part of making a lift.

My first introduction to plyometrics came in 1974. I and five others were training in Germany at the time under famed Mutterstadt Athleten Club coach Norbert Fehr, who had competed in the 1964 Olympics. In addition to the usual conventional weightlifting training, we were introduced to a thing called “sessel springen” (chair jumping).

We certainly did some springing. We tackled each chair by first bending our knees, then quickly extending them, making sure to add some forward movement to clear the chair seat. It was not enough to jump up and back down again. We had some horizontal to do as well. When we landed on the floor again, we re-bent our knees to amortize the drop.

One day he decided he would show us something new (at least it was new to us). He lined up five chairs in a row down the center of the gym. Each chair was about five feet from the other. The chairs were normal stacking chairs, probably a good three feet high. For our first taste of plyometric training, we were told to start behind the first chair and jump over it, lifting our feet high. No cheating by jumping only one leg over. As soon as one chair was successfully negotiated, we were to move a few steps forward and jump the second chair and so on through the full five chairs.

“Over time, the value of plyometrics has been rediscovered and is now a more permanent part of every Olympic lifter’s training program.”

But we were not done yet. Norbert then moved the chairs a bit closer together. We were to jump the five chairs again, but this time with no walking between the chairs, since they were now closely placed together. Our job was to jump over each chair and then reset. At each chair, we could then do our eccentric knee bend and then bounce out of it sufficiently to clear the chair. This made the process a little bit more difficult, as we could not depend on walking momentum to supply the jumping power. We mastered this, but we were still not done.

This movement mimics the double knee bend and subsequent triple extension seen in the snatch, the clean, and the jerk. It is almost axiomatic that those who do best in chair jumping will also do best in the lifts themselves. This is the same progression of teaching plyometrics used today, albeit with hurdles or boxes rather than chairs. 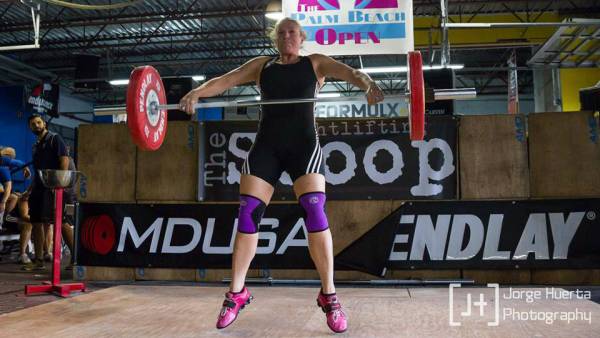 Our plyometrics were not restricted to the legs. We also did some work for the arm muscles. We were introduced to a movement similar to a basketball chest pass. The only difference was we didn’t use a basketball. We used a medicine ball, a heavy one. Two of us would stand facing one another and do a series of back-and-forth chest passes, pushing the ball as hard as we could. This of course necessitated us catching it, complete with absorbing the ball’s considerable energy. This proved to be valuable in training the body to receive the barbell at the top of the clean. The athlete in these cases must put the brakes on a weight or ball quickly and learn how to absorb the resultant energy.

Like he did with the chairs, Coach Fehr introduced us to arm plyometrics gradually.

Here is a summary of my thoughts on this type of training, including a few cautions:

All weightlifters should consider some form of plyometic training, except people with heart or circulatory problems, anyone with arthritis or other bone/joint problems, pregnant women, and diabetics with related nerve damage. Even if you’re not a weightlifter, if your sport requires explosive movements, especially in the legs, you need plyometrics.

We continued to do the drills Coach Fehr showed us after we returned home, but after a while we tended to neglect them. Over time, though, the value of plyometrics has been rediscovered and is now a more permanent part of every Olympic lifter’s training program.