Using a good, old-fashioned strength test is a great way to find out where an athlete stands. Designing the tests, however, is another issue altogether, and was a topic of interest in a recent Journal of Strength and Conditioning Research study.

Half of the research focused on the testing protocols. This is always an issue of concern amongst researchers, coaches, and athletes who want to be sure the tests are actually applicable. We want to know if a vertical leap really does test a soccer player’s ability to be successful on the field, or if performance on a 225lb bench press test actually correlates with a lineman’s ability to guard the line.

To assess the validity of one rep max testing protocols, the researchers used military personnel. During their job, soldiers are required to do specific tasks, so its essential to assess their ability to perform them. This is also true for sports. In both cases, we need the tests to determine placement and create the appropriate program. A cookie cutter exercise plan won’t work for two different people.

In the new study, the researchers first determined each soldier’s ability to lift the heaviest possible box once onto a 1.5 meter platform. After resting for at least 24 hours, they then performed the same test but with a lighter weight at a fixed six-second cadence. They did this six times, with at least a day rest in between and with a different random weight each time, equalling between 58% and 95% of their max from the first test. The results of their repetition tests were then compared to their performance on the max test.

Baed on the results, the researchers created the following chart detailing strength levels you should shoot for if you’re lifting a box of a given weight. The table projects what your one-rep-max will be based on your ability to lift a certain mass for a specified number of reps: 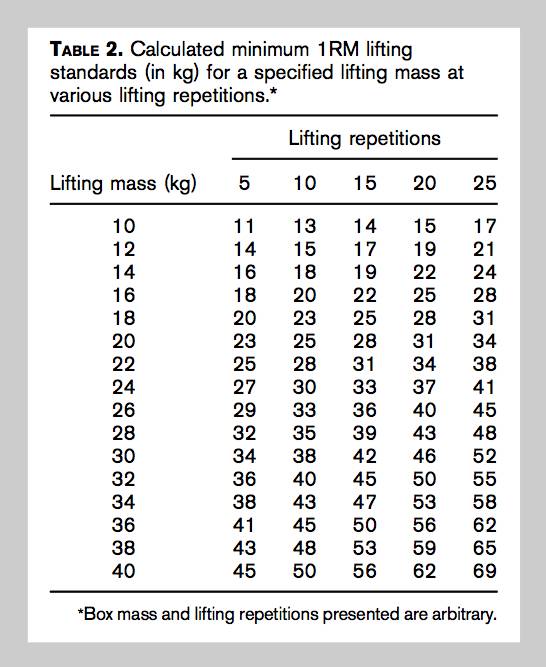 The researchers found the one rep max test was a good one. They also determined that submaximal one rep max tests have the greatest error roughly between seven and seventeen repetitions. In this range, we begin to get into no-man’s land when it comes to predictability. We can still get a rough guess with a one rep test, of course, but that range of reps is where individual differences will be most prominent.

Scoring well on basic lifting exercises like the ones used in this study can give us critical data on an athlete’s ability to respond to the physical demands of their sport. Using one rep max is nothing new in exercise science, so this isn’t necessarily breaking news. However, the test also helped determine where the greatest reliability lies, which will help us use these tests to more accurately judge an athlete’s ability.

1. Robert Savage, et. al., “On the Relationship Between Discrete and Repetitive Lifting Performance in Military Tasks,” Journal of Strength and Conditioning Research, 28(3), 2014