Why You Should Never Hit a 1RM Again

My clients rarely, if ever, attempt a 1RM. They get plenty strong without it and stay injury-free. Let me explain why you should most likely never go for a 1RM again.

Quite often when you read strength programs you’ll see something like “perform 3 reps at 90% of 1RM.” The problem then is figuring out what your 1RM actually is. That then creates another few problems for most trainees. Firstly, if you’re an inexperienced lifter, trying to hit a 1RM is a delicate balance between making it and hurting yourself. Learning to fail with integrity (i.e. holding your form even when the weight is beyond you so that you stay safe) is a learned skill acquired through a lot of time under the bar.

Quite often when you read strength programs you’ll see something like “perform 3 reps at 90% of 1RM.” The problem then is figuring out what your 1RM actually is. That then creates another few problems for most trainees. Firstly, if you’re an inexperienced lifter, trying to hit a 1RM is a delicate balance between making it and hurting yourself. Learning to fail with integrity (i.e. holding your form even when the weight is beyond you so that you stay safe) is a learned skill acquired through a lot of time under the bar. Secondly, many new lifters simply aren’t able to access the muscle software required to hit a real 1RM.

In normal lifting models you start beginners with something simple, like a linear progression that starts with three 3 of 10 for a few weeks, then transitions to something like 4 sets of 8. (That magic number of 30 total reps is a solid starting point for most. So when we switch to sets of 8 we need another set to maintain a number that roughly equals 30). After that it would likely move to something like the classical strength guideline of 4 to 6 sets of 4 to 6 reps (I like 4 sets of 6, 6 sets of 4, or the classic 5 by 5).

But that may only be a few months worth of training, and chances are that a real beginner will still be struggling with some of the more subtle nuances of an exercise that will keep them safe under maximal loading. Using the squat for instance I like the following progressions:

Moving up from the bodyweight squat quickly is possible, but the progressions from then on are going to take a while. It is entirely possible that you may need to follow all of the linear progressions for each exercise. Meaning, it could be twelve full months before you get to squatting 5 sets of 5 with the back squat.

In today’s world of instant experts via the university of YouTube, not many seem willing to put in the time to learn and correct their movements to ultimately gain the most from them. But like the stepping stones we have for any other task in life – imagine trying to learn calculus without having spent years on basic math functions such as addition or multiplication – the greatest benefits and the highest levels will only be achieved once a solid foundation is built.

That time spent on following a linear plan does a lot of things. The first and most important is that it gives beginners time to build a solid foundation of technique. You only get that from reps. Trust me when I say that it’s a lot better to have poor form with a weight you can do for ten than it is with a weight you’re not sure you can do for one. That doesn’t excuse poor form at any point, but the reality is that when you start you probably won’t have great form and your spine will thank you for not chasing heavy lifts until you do.

The second thing slowly following a linear plan will do for you is teach you how to access more high-threshold motor units. These are the big guys that only come out when they absolutely need to. With our lives these days being so stress-free physically – there are no sabre-toothed tigers to run from anymore – for those unaccustomed to hard physical work this skill needs to be reacquired. 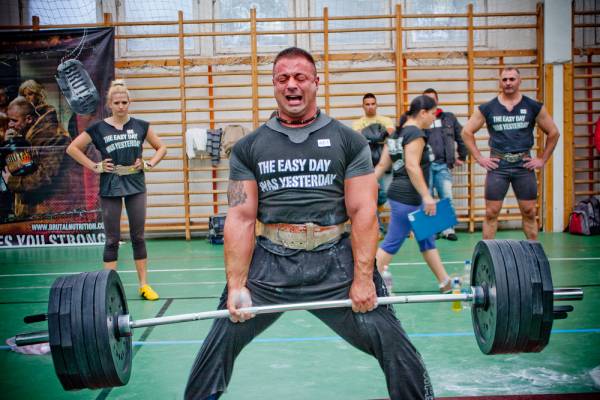 One of the things I do with my clients at Hardstyle Physical Training is rarely, if ever, actually go for a single rep. Instead we chase heavy doubles. My reasoning is that apart from competitive lifters there’s little real difference to most people between doing one rep or two. I know that while a one-rep effort may end up being disastrous for my client, a weight they think they can lift for two reps will at least result in one good rep being done. While two heavy reps is hard, it is a world away from trying for a single and for clients without much experience brings far less risk.

Continuing on with my theme of toying around with 5/3/1 this then becomes 5/3/2 in the third week before a recovery. It works just as well, clients are still able to hit PRs while maintaining a bigger safety net, and technique is better.

There’s a real trend in today’s fitness world to push people to train like powerlifters or weightlifters – that’s the scale being pushed away from the bodybuilding trend of the 80s and 90s still – but now we’re trying to convince people their bodies are ready and capable of handling 1RMs when the reality is most aren’t. Low rep strength work is an important part of the training diet, but trying to convince people this is appropriate for everyone is like saying the benefits of some light tumbling should be amplified into attempts at Olympic gymnastics floor routines. What is appropriate for elite lifters or for the sports of weight lifting (either Olympic lifting or powerlifting) are not the best models for the rest of us.