Learn about parkour competition, the difference between parkour and free running, and also some suggestions for what the novice looking to try parkour might want to seek out.

In part one of my interview with parkour enthusiast Tim Koren, Tim described some of the basic parkour movements and how there is no such thing as a typical class at his parkour gym. In part two, Tim describes his participation in a parkour competition and and distinguishes between parkour and free running, which are distinct concepts within the community. He also provides suggestions about what the novice looking to try parkour might want to look for.

As mentioned previously, Sebastien Foucan refers to his style of parkour as “free running.” Some people use the term “free running interchangeably with parkour, but the general consensus is that free running is more about expression and aesthetics. Parkour focuses on efficiency, in both time (speed) and energy (technique). But the disciplines are very closely related, and naturally enthusiasts often participate in both.

Parkour also reflects a philosophy related to personal empowerment, with parallels drawn between maneuvering around physical obstacles in one’s path and navigating the obstacles of life. Said Tim, “There are also a lot of parallels here to the same kind of self-empowerment and mental toughness you get through training BJJ.”

Recently Tim entered a competition at his parkour gym, Urban Evolution, called Warrior Night VI. Warrior Night VI is UE’s “in-house version of a Ninja Warrior obstacle course competition,” though it is not affiliated in any way with the TV series of the same name. Said Tim, “They drew about seventy competitors and probably had a few hundred spectators in total. It was a blast! The environment was extremely positive with the crowd and other competitors offering encouragement for every person who participated.” Participants’ overall performance was secondary to the support participants and audience members showed each other.

[It’s] much like the Ultimate Fighter helped to spread the popularity of MMA and BJJ. Many parkour gyms such as Urban Evolution have even started adding equipment to train for obstacles from Ninja Warrior that wouldn’t traditionally be considered parkour, such as the salmon ladder or the warped wall. I’m not sure if you can even find obstacles like this to train on at any gyms other than parkour gyms. 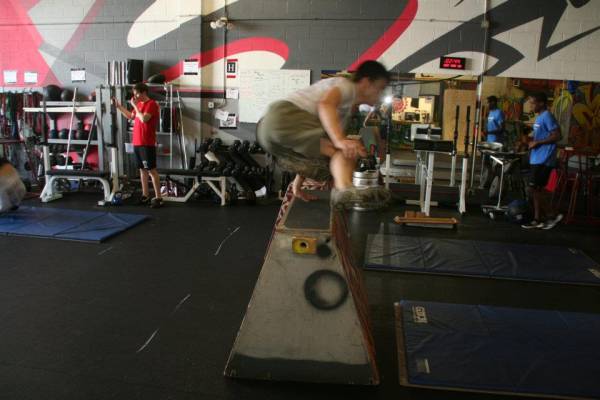 Competition is actually a polarizing force in the parkour community. According to Tim, “Many participants strongly dislike parkour competitions and believe they wrongly focus on beating other people rather than improving oneself,” taking the focus off of engaging with and navigating the environment. However, he added, “Aside from the early qualifying rounds, shows like Ninja Warrior are strictly about competitors versus the course.”

The would-be enthusiast is likely to find that parkour gyms are relatively few and far between because they are a fairly new phenomenon. But don’t lose hope, as Tim explained, “There are tons of Meetup groups out there, and if you live in a city or near a college campus there’s a good chance you can find one there. Facebook is a great resource to find these groups.”

When it comes to choosing a place to train, whether it be gym or meetup group, Tim had this advice:

As for what to look for, I’d say that safety should be the primary concern. Gyms do have the advantage of providing more control of the environment and being able to place their equipment and mats in configurations that provide safe scenarios to train through. That being said, training outside can also be very safe but the participant must be careful to go through a progression of steadily increasing difficulty and not to bite off more than they can chew.

In a gym, prospective traceurs should look for an emphasis on safety by the instructors. In a Meetup group they should make sure they aren’t getting in with people who are reckless and will peer pressure them into doing things they aren’t comfortable doing.

So if you’d like to add the designation “Traceur/Traceuse” to your business card, or if you just want to explore a different way to navigate that walk to the store, consider checking out a Meetup group or local parkour gym.

If you missed out on part one of my interview, follow this link: