What Is Parkour? Are You Already Doing It?

Parkour? Par-what? Freerunning? What are people talking about and why are they climbing all over EVERYTHING? Get the lowdown on this awesome sport you can literally do ANYWHERE.

Anyone who has seen or participated in parkour would probably agree that a description of it cannot convey the excitement of the real thing. To wit, American Parkour defines parkour as “the physical discipline of training to overcome any obstacle within one’s path by adapting one’s movements to the environment.” While this may be a technically correct definition, it does not capture the excitement and physicality.

Practitioners learn to jump, flip, swing, climb, and otherwise move through their immediate environment using the things in that environment – stairs, walls, fences, to name just a few. They are known as traceurs (male) or traceuses (female), and these terms allude to the fact that parkour’s development was facilitated by French practitioners David Belle, via his father Raymond Belle, and Sebastien Foucan (who calls his style of parkour “freerunning”). Raymond Belle notes that his experience with what would eventually become modern parkour originated from military maneuvers he learned serving in the French army and later as a firefighter.

So, parkour has practical application. But more importantly, it also just looks badass. Sebastien Foucan himself appears in the movie Casino Royale (click for video), and David Belle is one of the main actors in another movie in which parkour figures prominently: District B13. This one is in French with English subtitles, but don’t let that deter you. It’s great fun to watch, complete with an unlikely buddy dynamic and a pounding soundtrack you can feel in your chest. 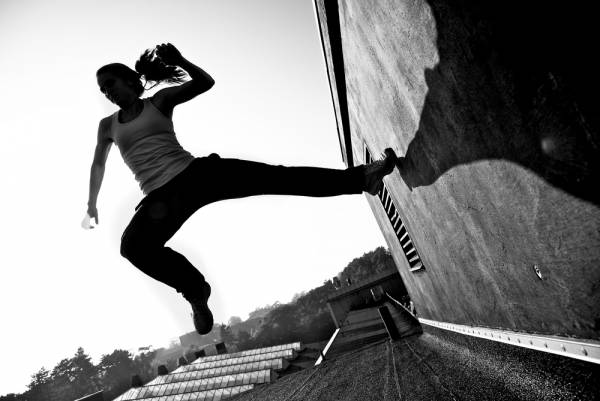 Badassery aside, what is striking about parkour, and what is probably part of the point, is that it is everywhere, it seems. Kids on the playground are engaging in it all the time as they slide or swing from monkey bars. Adults are dodging each other, weaving in and out of cars, and taking the stairs two at a time as they hurry to their destinations. Maybe these situations don’t capture the athleticism that some traceurs and traceuses demonstrate in their more death-defying feats, but they do show how and why parkour might pique the imagination, and how it exemplifies the notion that athletic activity is about life.

For examples of practitioners in action, you can do a youtube search. We’ve included one of our favorite videos here and we also featured the phenomenal Damien Walters in our Friday Flicks. Of course, interested parties are not advised to try any of the stunts featured in this video or anywhere else and should instead refer to a parkour school or professional for advice.

In a future story, I will share the insights and experiences of a specific student of parkour I know – why he trains, what some of the specific movements are, and what he would advise the would-be traceur/traceuse. Meanwhile, see if you can identify any elements of parkour in your own daily life – whether it’s hopping over and around the mess in your home (guilty) or evading a zombie attack by running over the tops of abandoned cars and hopping from rooftop to rooftop (not yet, but you never know). Leave your thoughts in the comments below.

Read my interview with a real, live traceur: